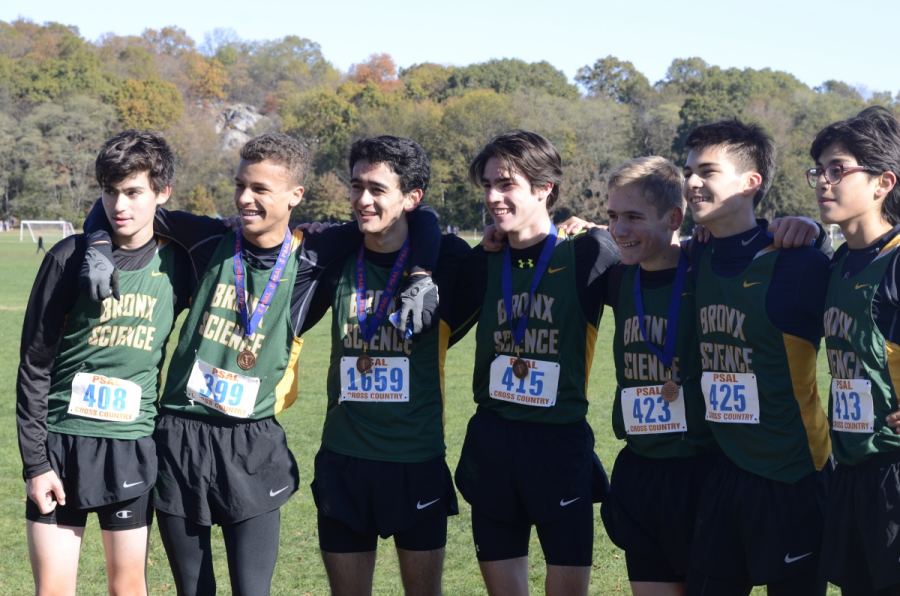 “Winning Third Place at the City Championships was absolutely amazing because it was the first time in six years that the varsity team qualified to go the state meet together,” said Ben Wade ‘19.

The end of another great sports season is always bittersweet: we are grateful for yet another amazing season, but feel lugubrious that the season has ended. On November 11, 2017, the Bronx Science Boys’ Cross Country Team ran to victory, placing fourth in the PSAL City Championships as well as first in the City Freshman Sophomore Championships and Bronx Boroughs Championships.

The City Championships are held at the end of the Cross Country season, with players from schools all over New York City participating. The Bronx Science Cross Country team has been preparing for this event since the start of the season. Hoping to make their team proud, runners always exert themselves beyond their limits in order to perform their best. Coach Mei, the coach of the Boys’ Cross Country team, constantly challenges the runners to do even better at the next meet. Not only does the Coach motivate the team, but their captain, Ben Wade ’19, does as well.

Itamar Pres ’21 said, “Not only did Ben push the pace of all our practices, making us work harder, but he also believed that each one of us would do well, and he motivated us to run as best as we can.”

The boys always do different exercises during practices, such as running up and down the stairs and working ladder ropes, ensuring that all the runners are well prepared for their meets. Running a 5K at meets is a very tiring and challenging feat, but the Wolverines feel a huge sense of accomplishment after finishing each race. The entire team has shown tremendous improvement, moving up from 8th in the city last year to 3rd place this year. Their success has definitely made their coach and captains proud of being a part of the action.

“All of us are distance runners for the most part, and compared to the track season, it is a much smaller team, so everyone gets along and is friendly with one another, which is my favorite part of Cross Country,” said Wade. Since all the runners run long distance, the team is united, close-knit, and interdependent. The unity of the team contributed immensely to the runners winning 3rd place in the City Championships.
“[Ben] also believed that each one of us would do well, and he motivated us to run as best as we can.”
Not only have the boys placed third in the City Championships, but they also won the Freshmen and Sophomore Championships (Frosh Champs, for short), as well as the Bronx Boroughs Championships. While this may not seem like a big win for the team given their success in previous seasons, new runners feel especially proud to have won so much in their first year of being on the team. Winning Frosh Championships gave the boys confidence for the next Cross Country season.

“I think that both the Freshmen Champs and the Sophomore Champs races were superb indications of how good we can be in the future,” said Sawyer Cooper ’20.