The modern chapter to the story of the one of the most divisive teams in all of sports has begun. 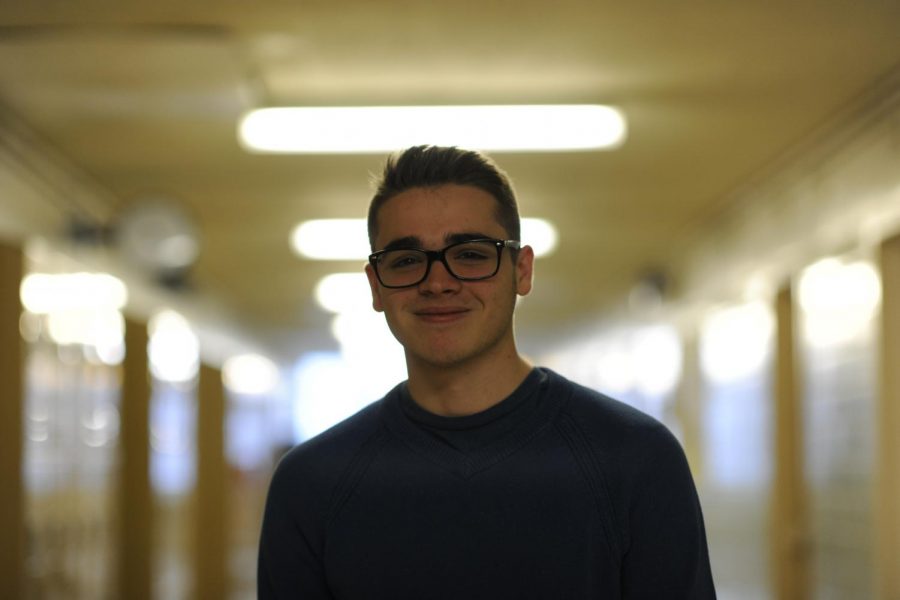 Beattie Bernfield, '19, is one of many baseball fans who voice passionate opinions about the New York Yankees

With one negotiation, the return of an empire was complete. The 2017 New York Yankees were something of a likeable, upstart and homegrown team, which other baseball fans came to tolerate of some sorts, because of their underdog status. But on December 11, 2017, the Yankees had reeled in the big fish – King Stanton himself. By trading for Giancarlo Stanton, the Miami Marlins’ monster masher and reigning MVP, the New York Yankees had reaffirmed baseball fans’ league-wide disdain for their iconic franchise, and provided a clear answer to the fans perpetually confused by watching a somewhat enjoyable Yankees team. The ‘Baby Bomber’ squad is a team of the past, and the Evil Empire has returned, to the disapproval to many.

The New York Yankees have always been, and always will be, an eternally polarizing sports franchise. The largest fanbase in sports (by far) is treated with the revenue benefits of an organization that plays in the largest market in the world. It is treated like royalty due to the constant success of the organization, which is the winningest franchise in all of sports with twenty-seven World Series victories. Yankee pride has become synonymous with flaunting victory after victory, championship after championship. Yet, these same attributes are the basis for widespread hate and emotions of spite for a majority of the collective baseball community. Often times, the storied franchise flexes its financial might and spends its way to victory through singing high-profile free agents rather than focus on player development and produce stars on its own. Similarly, a vast portion of Yankees fans constantly flex their franchise’s success, and display an obnoxious impatience for for winning results. Yankee success became an annoying reminder that certain teams had inherent advantages, and its frequency made its significance negligible, and frankly annoying. Few sports teams, or topics of discussion in general, evoke such strong emotions of love or hate.

Beattie Bernfield, ’19, offers his input. “Baseball is about parity and diversity, and the story-lines of the triumphant underdogs. When there is a franchise that has nothing to gain or nothing to lose because it’s already achieved everything possible like the Yankees, there’s no point in watching the game anymore because there are no more such stories to follow. Really, the Yankees have just become a franchise that pounds away everything that is good about baseball, and not giving us [fans] anything fresh or anything to root for, as well as taking away the raw joy of the game.”

However, the Yankees’ pay-to-win formula of success failed the team in recent years from 2013 through 2016. After multiple instances of signed free agents aging poorly into their thirties, leading to mediocre results and middling ballpark attendances that did not concur with the inflated payroll, a different approach was taken to satisfy the expectations of their storied franchise and fan-base. They realized the flaw in their vicious cycle of trying to atone for performance failure by spending even more money, and made a significant effort to break their unhealthy habits of free-agent binge-ing. From towards the end of the 2015 season, through 2016, and even as recently as the 2016-17 off-season, inward player development with an emphasis on youth became the utmost priority, so that a new generation of Yankee stars could field the franchise in later years, possibly 2020, or 2019 to be optimistic. In fact, shedding payroll and clearing playing time became a paramount goal.

Meanwhile for the rest of baseball, the bow-out of Yankee significance during this time frame represented a refreshing, healthy return to parity in competition, when a big-market bully wouldn’t exacerbate an uneven distribution of talent, and when every baseball conversation wouldn’t end with Yankees fans gloating and exclaiming “Twenty-seven rings!”

2017 did not forecast a projection of success for the Yankees. 2017 was supposed to be a year of rebuild, another year of peace and tranquility for the rest of baseball, and another year of rejoice for fans who enjoyed New York flounder in mediocrity while still rebuilding with auditioning prospects. Yet, New York played like a team that many times mirrored the success of its more recognizable rosters, including advancing to within a game of another championship appearance. Even more confounding was that instead of a bought team from free agency, the Yankees consisted of young, budding players eager to prove themselves in the league. The ‘Baby Bombers’ were an exciting team to watch, brimming with youthful enthusiasm and an upstart mentality. With the seasonal success to supplement this tingling aura, a possible contender two-to-three years down the line suddenly looked like a legitimate threat in the now, advancing to within a game to the World Series.
Yankee success became an annoying reminder that certain teams had inherent advantages, and its frequency made its significance negligible, and frankly annoying. Few sports teams, or topics of discussion in general, evoke such strong emotions of love or hate.
This pleasant surprise was an unsettling development for the rest of baseball, not only in terms of other teams, but it also usurped the image of the Yankees that many took pleasure in despising.

On December 9, 2017, the Yankees traded for the reigning MVP, Giancarlo Stanton, the first outside talent the team added, effectively ending the ‘Baby Bomber’ narrative. However, the nature of the deal created great controversy. New York had used its financial capabilities, taking on Stanton’s massive, thirteen-year, $325,000,000 contract from the Miami Marlins , a smaller market team eager to shed salary. This was done in order to leverage brokering an unfair trade that allowed New York to trade talent nowhere near the value of an MVP. This called into debate whether large-market teams, such as New York and Los Angeles, held an unfair advantage over small-market teams because they are able to not only take on massive contracts to gain trade leverage and sport larger payrolls, but also offer enormous signing bonuses to international talent, and lure free agents to playing for them due to the increased revenue and fame from marketing deals. Eventually, the anguish over the Stanton trade evolved into a criticism of how big market teams operated, and eventually a questioning of the legitimacy of their successes.

Whether or not the Yankees’ dubious acquisition of one of the best players in baseball will shed light on the holes in the sport’s economic system, the consequent return of the Yankee Evil Empire will definitely re-evoke passion – whether it be support of extreme disdain – a passion that will surely be good for the game of baseball. The MLB has always flourished in revenue and popularity during the times of Yankee dominance, as in the late 1990s. But at the local level, there is undoubtedly nothing more exciting than excited, prideful, and passionate sports fans putting everything on the line for their desired outcome. The Yankees will ensure that conclusion.