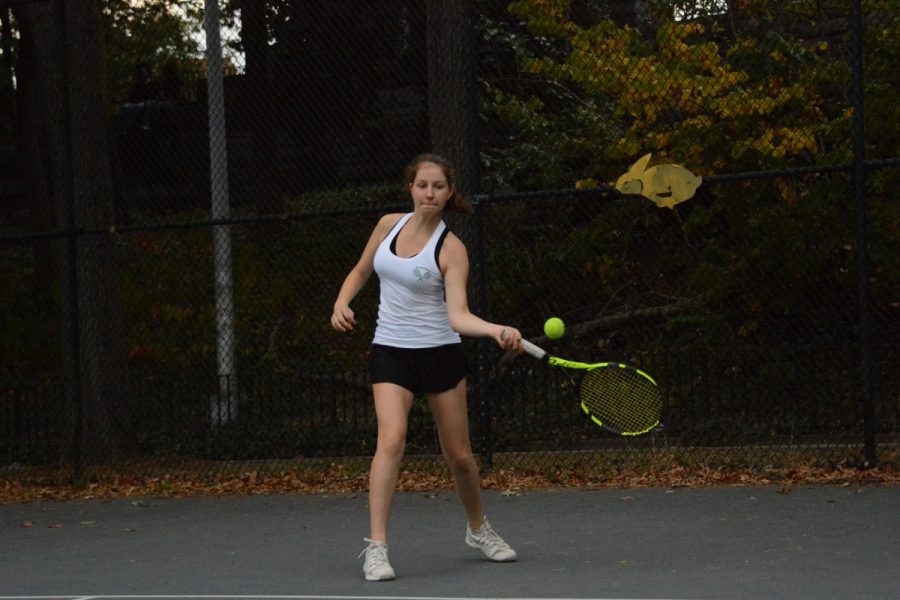 Brett Zakheim ’19 hits the ball, using a cross-court forehand, to her opposing player during a Girls' Varsity Tennis match.

It was that time of year again; days after the finale of the U.S. Open, the Girls’ Varsity Tennis season at Bronx Science was back in full swing.

At the beginning of this academic year, their goal was clear, to play tennis the best that they can and try to make it to the finals for the third consecutive year. This was Coach Tara Ware’s second year as the coach of the team. During an on-court interview, she had high expectations for this year’s team, even though their top singles player had left the team last year, by graduating.

“We are on a solid run. It is very possible that we will win the championship,” said Coach Ware in the midst of the final stretch of the season. “We work on fitness during every practice in order to become stronger and faster. The girls also work on their serve and on their volleys. I expect us to win the championship.”
“I’m really proud of our team pulling together, despite losing our top seed. We give our all to every game.”
Even though the team began with a rocky start, the players still had a lot of confidence near the end of the season. Cassie Tian ’19 said, “We had a pretty rough start to our season compared to previous years. There were a lot of changes with new team members and some uncertainty, but for the rest of the season as everything became more clear, I think that we will be able to win every single remaining game easily.”

Sophie Zinberg ’19, reiterated Tian’s comments. “I’m really proud of our team pulling together, despite losing our top seed. We give our all to every game.” Throughout the season, the Girls’ Varsity Tennis Team’s determination for making the playoffs was high. Brett Zakheim, ’19 said, “This season, we have the chance to be the best tennis team in the city.”

Despite not having a phenomenal start to the season, the team managed to bounce back in early October 2017. After a loss in the first game of the season, they came back and beat the High School of American Studies with a score of 5-0, followed by a win against Stuyvesant High School with a score of 4-1. With these wins, the team’s record stood at 4-1 by October 2017. The girls’ team finished the season with a record of 7-3, making them eligible for the first round of the playoffs.

During the first round of the playoffs, the team played against Townsend Harris. They beat them with a final score of 5-0 at home.  With one round down, they were two rounds away from the finals.  Their next game was against Beacon High School in the semi-finals. It was a tough match. Unfortunately, the team lost to Beacon High School with a score of 1-4, ending their season along with their dreams of a league championship.

The Girl’s Varsity Tennis team finished off a terrific season with their run in the semi-finals. They played really well this year, even with a few mid-season mishaps, and they are still one the best teams in the city. Whether it was at practice or during a match, the players showed their Bronx Science fighting spirit by working hard throughout the season.