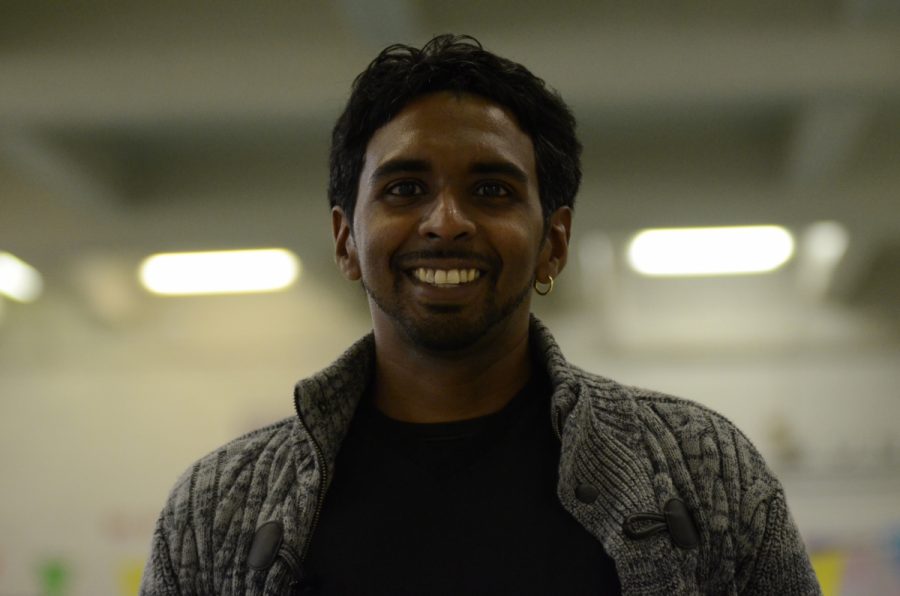 The start of a sports season is exciting for everyone. It’s an opportunity to learn from last season’s wins and losses and build relationships with new teammates. But it also gives way for new problems for a team. For the Girls’ Varsity Swim team, their season is met with a change in leadership, which they have not experienced for eight years.

Meet the girls’ new head coach, Mark Maraj. A teacher and the head coach for Boys’ Swimming at Theodore Roosevelt Educational Campus, Maraj was recruited by athletic director Mr. McGrath in the summer of 2017. Maraj was immediately welcomed into the girls’ community with open arms, and their bonds have been growing ever since. “Over the past few weeks, the girls on the team and the managers have bonded with him really well,” says Olivia Chin ’19, who will be a swimmer on the team for three years this season.

Captains Victoria O’Hara ’18, Michelle Juang ’18, and Jasmin Bouzarouata ’18 are especially excited for the season with Coach Maraj, since it is their last year to swim for Bronx Science.
“Having a new coach is a big adjustment in any scenario,” said Juang. “Coach Maraj is very dedicated to our team and is truly trying to be the best coach that he can be for us. The girls on our team have warmed up to him, and although we have a new coach this season, our team remains stronger than ever.”

Many obstacles have been thrown at the girls in the past, including having barely any access to a pool for practice, long commutes, and the clash between club swimmer loyalty (for girls who swim outside of school) and PSAL and school requirements. The girls were finalists during the 2015 season, and the pressure of making it through the championships has risen with each passing season. The goal is to beat longtime rival Brooklyn Tech with Mr. Maraj.

Though the girls are enthusiastic about the many possibilities for the season with Maraj, there is still some bittersweetness about previous coach Mr. Derek Swartz, who is now coaching for Brooklyn Technical High School’s swim teams. “The team was devastated when they were told the news that Mr. Swartz was leaving, but knew it was for the best. Even though he is not our coach this season, he has been doing everything he can to keep this team on its feet, as he worked hard to secure a new coach for us. In season, he has been a major help to us captains when it comes to answering questions, providing apparel for our team, and taking on additional responsibilities in order to guide our new coach,” said Juang.

Mr. Swartz will forever be a key component of the girls’ previous seasons, and his dedication will never go unnoticed. “He put a lot of effort into our team for us to be happy, not only for our victories, but for us to be happy with ourselves and our performances. I know he’ll be a wonderful coach for Tech, and they’re so lucky to have him. We’ll all miss him!” commented Joanna Zhao ’20.

Mr. Maraj is eager and prepared to guide the girls through the season. “This team has a way of taking you in and making you feel like family. It’s an honor and a privilege to work with this wonderful group.” he said. His coaching style differs greatly from Mr. Swartz’s in terms of the structure of his practices, but he still wants the same end result, for the team to achieve greatness. “As for words for the girls, I truly believe it takes all of us time to realize our own potential. Knowing that, don’t set limits for yourself. Continue to work harder, jump further, and reach for more. You might surprise yourself with how much you can accomplish when you start to believe there are no limits for yourself,” he said. The girls have definitely noticed his ambition through the ruthless practices they’ve had since the start of the season, when they’ve had to beat fast time interval cutoffs and push their bodies to their limits. “I can tell that he tries his best and truly wants our team to be the best that we can be, and we all appreciate that,” said Katherine Zhou ’20.
“…when you start to believe, there are no limits for yourself.”
This team has been able to get past wins, losses, and everything in between due to one key component that defines the team: camaraderie. Even past teammates will say that the team is the closest of all Bronx Science sports teams due to countless team bonding events and traditions, including team sleepovers and dinners, as well as the complex relationships that tie them all together. It’s only a matter of time before Mr. Maraj is completely absorbed into their world as well, for all of the girls are ready to help with the transition. “I hope we can get Coach Maraj one hundred percent comfortable with our team. I would advise for him to get to know us more in terms of our personalities and swimming goals so that he can help everyone achieve their goals,” said Zoe Chen ’19.

The girls, Mr. Maraj, assistant coach Mr. Brown, the team’s managers, and all of the swim families are prepared to take on the season’s challenges. Help support the team reach their goals of beating rival schools and making it through playoffs by visiting future meets!