The Overlooked Tigray War in Ethiopia

A look at the Tigray War in the context of global news coverage, which has been sorely lacking. 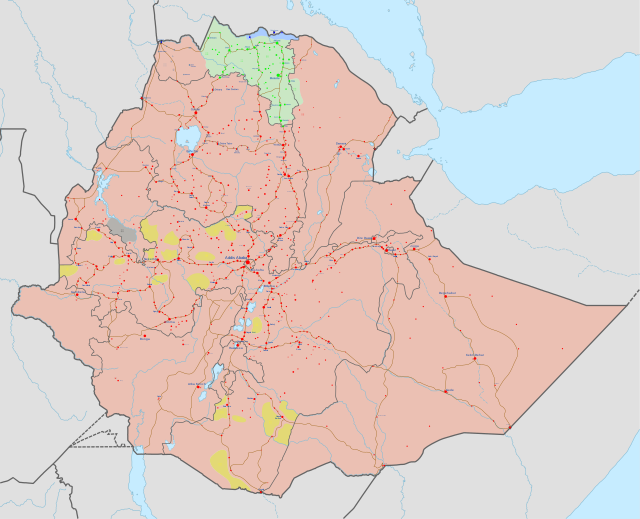 Here is a map illustrating the current state of the Tigray War as of February 2022, when a humanitarian ceasefire was signed by the belligerents. Blue represents Eritrean forces, red represents Ethiopian national forces, yellow represents Oromo forces, and green represents Tigray forces.

For eighteen months, the central government of Ethiopia has tried to reestablish control over the Northern Tigray Region. The war is only the last installment of a decades-long conflict between the Oromo ethnic majority and Tigray minority. Despite this uniquely African aspect of the civil war, the issue bears many similarities to recent unrest in Western countries that has received far more attention from the press. The immediate origins of the Tigray War are very similar to the reasons behind the mid-pandemic protests that swept France, Belarus, and Canada. An incompetent government response to treating COVID-19 caused already evident tensions to boil over.

In Ethiopia, Prime Minister Abiy Ahmed postponed the August 2020 elections indefinitely; they were eventually held in late June of 2021. These elections were responsible for all of the seats in the House of People’s Representatives, Ethiopia’s parliament. The office of Prime Minister also hung in the balance, because its occupant was determined by the parliament. The Tigray People’s Liberation Front (TPLF), the organization which autonomously administered the Tigray region, saw this as a coup attempt on the part of Ahmed. In response, they held their own local elections in September 2020. The central government responded in turn and declared the Tigray elections to be illegal.

Although the actions of the Tigray leaders may not be constitutional, they certainly are not unconstitutional. The 1995 constitution that governs the current Ethiopian state provided remarkable autonomy to the constituent parts of the nation up to and including secession (Article 39). The conflict did not begin as a war for independence, but the actions taken by the TPLF in late 2020 are in line with the rhetoric of the constitution and its architect, Meles Zenawi.

Zenawi gained notoriety as a rebel leader at the head of an early iteration of the TPLF, which was then a broad coalition of peasant rebels. Politically, these rebels resented the centralizing efforts of the Communist government that ruled Ethiopia during the 1970s and 1980s. But most people do not think so grandiosely. Rather, peasants were drawn to local insurgencies because of their abuse at the hands of the Amhara elites. The Amhara have represented the ruling caste of Ethiopia since the 13th century, although they are only the second largest ethnic group in the country. Even now, after the victory of the various “liberation fronts” in the Ethiopian Civil War, Amharic remains the official language of government because it is the language of the cities.

The Tigray, Oromo, Somali, and Eritrean people, among others, made up the majority of the rural population of Ethiopia. They were subject to ruthless persecution from the authorities through forced famine and physical violence. The stunning brutality that Mengistu Haile Mariam, the leader of Communist Ethiopia, employed, is what made rebellion a necessity for survival. In 1991, these local ethnic organizations collectively overthrew the Derg. As the head of the following Transitional Government of Ethiopia, then-president Zenawi recognized Eritrean independence.