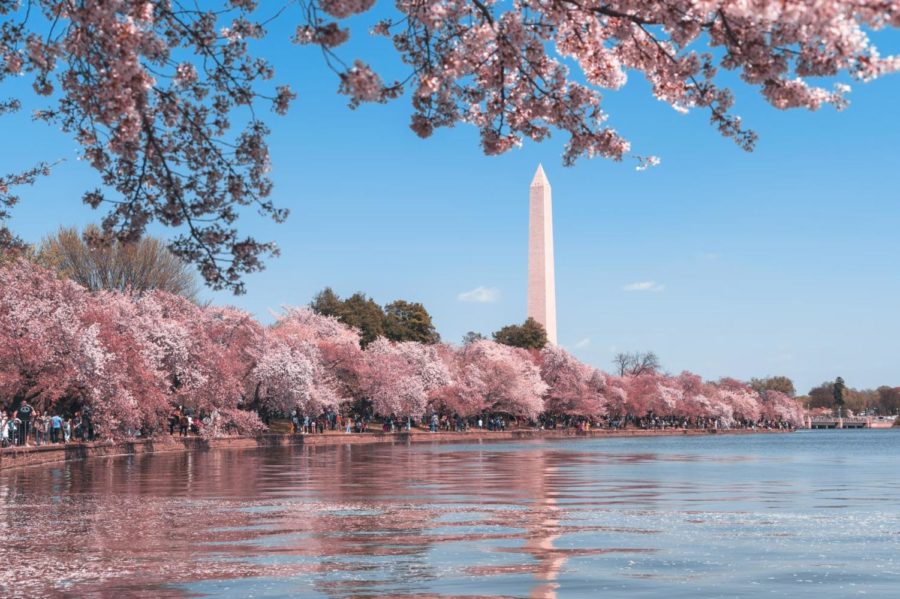 The cherry blossom trees are located close to the Washington Monument, making it a significant attraction and event location for the festival.

As the fragrant cherry blossoms in Washington D.C. bloom, they highlight the entire city in pale pink flurries. They reach their peak bloom in late March, when the National Cherry Blossom Festival takes place. This annual event commemorates the gift of 3,000 cherry trees from Mayor Yukio Ozaki of Tokyo to Washington D.C. back in 1912. The trees represented, and continue to represent, the alliance between the people of the United States and Japan. Taking place currently – between March 20th to April 17th of this year – the National Cherry Blossom Festival features a variety of events: the Opening Ceremony, Blossom Kite Festival, Parade, and Petalpalooza. Such events and opportunities at the festival allow people of all countries to participate in cultural exchanges and expose themselves to diverse experiences.

Cherry blossoms have long been a key part of Japanese culture. Known as ‘sakura’ in Japanese, they symbolize numerous concepts and themes, such as rebirth and renewal, as well as complementary forces like birth and death, and beauty and violence. With the blooming season serving as a mark for the end of winter, and arrival of spring, the celebration of the cherry blossom has become a major part of the culture. Many people complete the tradition of ‘hanami’ (cherry blossom viewing) and celebrate with family and friends. Ever since the cherry trees were first gifted to the U.S. 110 years ago, the country has been celebrating the blooming of cherry blossoms, and eventually at the National Cherry Blossom Festival which began in 1934.

After running mainly virtual last year, this year’s festival has been operating in person. The National Cherry Blossom Festival begins with its renowned Opening Ceremony, which pays tribute to the countries’ friendship by featuring performances from artists that are connected to both. In this year’s festival, the ceremony took place on Sunday, March 20th at Warner Theatre and was also streamed live. Artists such as the Minyo Crusaders, Keisho Ohno & Toshihiro Yuta, and Samurai Artist KAMUI were featured performers at the event. Watch the recorded livestream of the event here.

In addition to celebrating the relationship between the people of the United States and Japan, the festival also serves as a massive tourist attraction, drawing in people of all backgrounds, and incorporating their identities into the experience. At the Blossom Kite Festival, which occurred on Saturday, March 26th, people are able to fly kites free of charge by the Washington Monument. The parade, which took place on April 9th, featured artists such as Taylor Dayne and Freddie Jackson, and balloons of popular characters like Peppa Pig and Clifford the Big Red Dog. The final event, the day-long celebration referred to as Petalpalooza, happened on Saturday, April 16th. Each of these events have traits that set them apart. “Despite being centered around the theme of cherry blossoms, each event was different from the next,” said Shireen Zaman ’22, who attended the festival back in 2019.

There is a feature called the ‘Bloom Cam’ on the National Cherry Blossom Festival website where viewers can watch cherry trees in real-time, from wherever they are. “Before I went to the festival, I would watch the Bloom Cam very often to see how the cherry blossoms were doing,” said Zaman.

The National Cherry Blossom Festival concluded on Sunday, April 17th following its unofficial closing ceremony, otherwise known as Petalpalooza.
This annual event commemorates the gift of 3,000 cherry trees from Mayor Yukio Ozaki of Tokyo to Washington D.C. back in 1912. The trees represented, and continue to represent the alliance between the people of the United States and Japan.