Despite the unique challenges the Class of ’22 has had to endure given the ongoing Coronavirus pandemic, students have still been able to conduct groundbreaking research that has been recognized by the nation’s oldest and most prestigious science and mathematics competition. 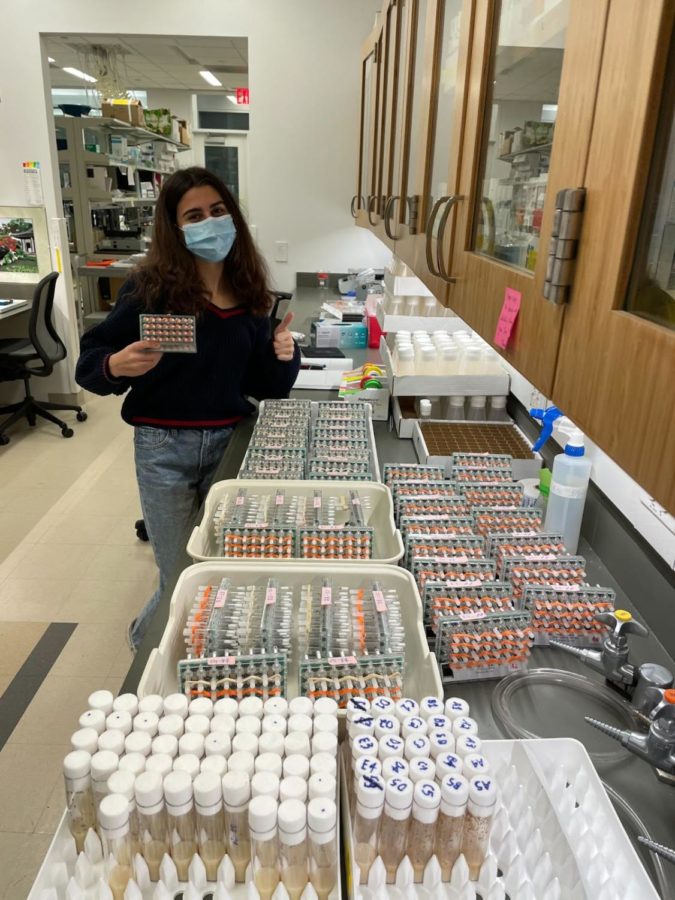 “[My favorite part was] meeting a community of people who love science and having the opportunity to learn from them. Bonding over freaky fly mutants or trends in a dataset is the best and most memorable part of my research process, and definitely something I want to continue in college and in the future,” said Aliya Fisher ’22.

Necessity is the mother of invention. As the list of global problems evolves, so do our approaches to overcoming them. Our society thrives off of minds who work to improve our everyday lives, and as such, our society looks for more innovators, especially among the younger generations. Students at Bronx Science are already preparing to fill their future roles, tackling issues that leading scientists have been researching for years. A select few displayed their achievements at the Regeneron Science Talent Search.

Regeneron Science Talent Search named ten Bronx Science seniors as Scholars (semifinalists) for 2022, the most out of 603 high schools who submitted entries, across 46 states, Washington, D.C., Puerto Rico, and eight other countries. Bronx Science has now had the most semifinalists of any school for the last two years, as well as four of the last five, tying for first in 2020.

Founded in 1942 by Edward W. Scripps and William Emerson Ritter, the Regeneron Science Talent Search is the nation’s oldest and most prestigious science and math competition for high school seniors. Society for Science, a non-profit organization based in Washington, D.C., has run the Science Talent Search for almost eight decades, working with Regeneron Pharmaceuticals, Inc. since 2016.

The competition aims to recognize students who develop the ideas that can solve society’s most complex challenges. It gathers students from all across the country who submit their self-developed research to be reviewed by a national jury of professional scientists.

This year’s semifinalists had to face another challenge: the ongoing COVID-19 pandemic. “The pandemic hit New York City as I was getting started with conducting research. Many labs, colleges, and schools shut down indefinitely. I lost contact with my research mentor for a few months, and my research endeavors were put on hold, as I adjusted to online learning.” said Le.

Le studied the human brain in order to understand its complexities and discover the unknown. “I studied four symmetrized locomotion subnetworks in the C. Elegans connectome and developed a Matlab program to randomly remove neural connections from each subnetwork,”  said Le. C. Elegans has been used as a model to study numerous human diseases and has helped us better understand the immune system. These models are crucial to gaining knowledge concerning problems within our body as well as societal issues.

Le found that the most impactful connections can be located through removing connections, running simulations, and collecting the Pearson correlation for both the original and modified networks. The connections with a high impact on the dynamics of the network often involved interneurons or command neurons. Le said her findings can be used for further research to improve artificial neural networks.

Neural networks use brain processing to develop algorithms, often used in sequence and pattern recognition systems. They reflect the behavior of the human brain and help solve some of the most complex real-life problems.

Some made the most of the circumstances, taking advantage of the possibilities the situation offered. “The pandemic and remote learning gave me a lot more time to dedicate towards my research,” Shah said. “It wasn’t particularly challenging for me to conduct research, since my project was computational based.”

Shah researched an algorithm to help reduce risks and barriers in traditional pharmaceutical drug development. “The computation needed to run such simulations far exceeds even the most powerful supercomputer in existence. A quantum computer, on the other hand, in theory, could complete it in a fraction of the time,” he explained. His algorithm applied machine learning to a problem rooted in quantum chemistry, overcoming limitations previous algorithms have had using quantum hardware. He hopes his discovery will help to reduce risks and barriers relating to cost and time, improving scientific advancement in the future.

The unique challenges called for adaptation, prompting fundamental changes to projects. When asked what research was like during the pandemic, Vogel responded, “I started out with a totally different, lab-based project. However, after the pandemic shut down many in-person labs, I moved to an entirely computational project.”

As the world shifted towards working remotely, he moved with it. Vogel researched two subjects that have become very prevalent over the past few years: cryptocurrency and social media.

He looked into a new method of predicting trends in publicly-traded assets using social media, specifically Twitter. Vogel found that social media influences increase accuracy in day-to-day predictions. By influencing his decisions through subjective information online, he gained 65 percent accuracy for Bitcoin and Dogecoin, while gaining 20 percent on buy-and-hold strategy. He was able to effectively use social media in order to increase his accuracy in predicting market prices and trends.

For better or for worse, the world is becoming more reliant on technology. Many services are accessible with just a click of a button without the need for human input. In particular, Artificial Intelligence (AI) has made substantial strides in the development of new technology, giving rise to improved precision, speed, and effectiveness of human efforts.

One way AI has helped humans has been image enhancement, allowing humans to view fine details they may have otherwise missed. In medicine, it helps to diagnose disease more quickly and effectively.

Iskhakov aimed to create an algorithm that improves the clarity of CT imagery, commonly used to diagnose cancer. Due to its low computational complexity and success in reducing the noise that blocks the scan’s detail, his algorithm may become a very powerful tool for early tumor detection with further parameter adjustment and testing.

AI has paved the way for automation. Creating and finding robots that efficiently work to provide services to the public is becoming increasingly important. Rossberg’s project addressed the issue of insufficient dexterity in medical robots. Many of them have very high costs, restricting hospitals’ ability to purchase and clinically implement them.

“I designed a cost-effective, fully 3D-printed mechanism that uses spherical gears to maximize actuation and range of motion capabilities,” he said. He plans to continue his research as automation grows bigger, noting that, “‘Completion’ is a relative term when talking about research. In my case, I am still working on various hardware and software modifications.”

All of these students pushed themselves intellectually to points beyond what they thought was possible. “I did not think I was capable of doing research on a topic that even leading scientists couldn’t solve, so I was really nervous that my countless hours would be put to waste,” Gu said. He researched H-MRCNN, a specific methane detection machine learning process that was recently discovered.

“This discovery is so important because methane is 80 times more effective at trapping heat than carbon dioxide and is the leading contributor to global warming,” he said. “[However,] there is one fatal flaw with H-MRCNN: the set of hyperparameters in its infrastructure contain a crippling weakness, which leads to the model’s failure to function properly during reproduction.”

Gu was able to optimize the hyperparameters and enable the reproducibility of the H-MRCNN model to improve the detection accuracy of methane. His discoveries will help scientists better locate the main sources of harmful greenhouse gas leakages in the fight against global warming.

As big of an issue global warming is, it is only one on an ever-growing list. In 2015, the United Nations adopted the Sustainable Development Goals (SDGs), a collection of seventeen global objectives designed to create an ideal world.

“Although it has been six years, the research community around the SDGs has acknowledged the large knowledge gap between understanding the goals and operationalizing them,” said Labre. He attempted to close this gap by using socio-economic indicators and AI to determine which were most important in achieving the SDGs. Labre wants his research to guide policymakers to address the problems at the root, rather than simply treating the symptoms.

All of these projects were only possible because of the support that Bronx Science provides for its students. “One of the main reasons why I chose to go to Bronx Science was because of the Science Research program. In 8th grade, I remember touring the school and seeing seniors presenting their research, and I found it interesting hearing about what they did during the three years in the program,” said Shido.

He researched bats in New York City and their interactions with urban landscape features. “Trees and buildings were most strongly correlated with bat activity at each of my study sites, which builds upon previous studies that bats prefer elevated areas for foraging and roosting,” he explained.

Additionally, Shido observed greater documented activity of Little Brown bats. The species was devastated by the White-Nose Syndrome disease, a disease caused by an invasive fungus growing on the skin of the bats, causing dehydration, starvation, and death. His findings suggest that the population is slowly recovering after the disease had nearly eradicated the species.

The Science Research teachers are what make Bronx Science a great place for research. Students become part of the research program as early as sophomore year and teachers guide them throughout their years at Bronx Science. “My teachers in the Biology research program, Mr. Chomet, Dr. LaGrassa, and Dr. Gensert motivated me — they were always so excited about biology, which made it impossible to not see what all of their excitement was about,” said Fisher.

Fisher found that these mutations can occur without being genetically inherited. She explains that “if our fly model system is applied to human biology, it suggests that disruptions or changes to our biological timekeeping systems that occur within our lifetimes, which don’t alter our DNA, could affect future generations.”

Research gives students the opportunity to dive deeper into topics they are truly interested in. For Morange, that was all it took. “The realization that the program gave me the opportunity to study anything that interested me — paired with the prospect of making new discoveries in a field that I genuinely cared about — pushed me to pursue the research track.”

She researched how symptoms of depression, anxiety, and eating disorders (EDs) affect disclosure rates among college-age sexual assault victims. Those who experienced ED symptoms or high levels of depression reported their assaults at lower frequencies. Her findings raise the question of how we can protect and care for people who are victims of these crimes.

Research is daunting: you are going into a world of the unknown. It is predicated on taking risks and encountering failure until you eventually come up with a discovery no one else in history has uncovered. “I learned about how valuable it is to take risks throughout the research process. Even though I wasn’t 100 percent confident in my model because it lacked existing literature to support it, it ultimately improved my paper because it created a new, original hypothesis to test in a future experiment, which is fundamental to the research process,” said Fisher.

All of these students should be enormously proud of what they have accomplished. However, they do not seem to be finished just yet. Many pointed out future research that their findings could lead to, or the value they found in research, inspiring the trajectories of their futures. They have the potential to become some of the brightest stars in the research world, and there is no doubt they will continue to positively impact our society for years to come.

“The realization that the program gave me the opportunity to study anything that interested me — paired with the prospect of making new discoveries in a field that I genuinely cared about — pushed me to pursue the research track,” said Genevieve Morange ’22.