The Increase in Forest Fires is a Harbinger of Climate Change 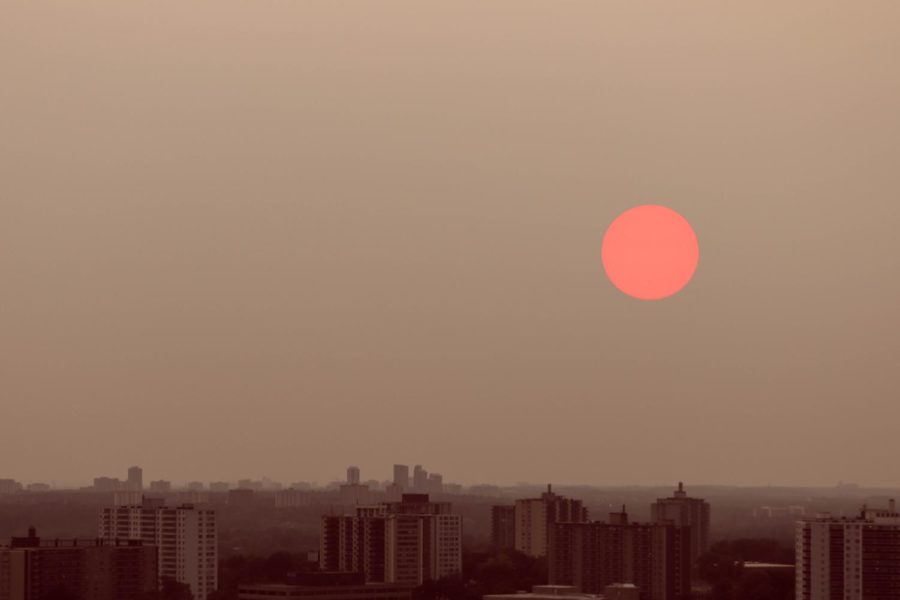 A bright red sun, caused by haze from the California wildfires, appeared in Toronto, Canada on July 20th, 2021. (DESIGNECOLOGIST / Unsplash)

In July 2020, the northeast saw a haze that covered a bright red sun. Though the deep red color is known at sunrise and sunset, this specific sun appeared to carry its crimson hue all day. This sun gave the East coast a glimpse at the massive fires raging in California forests over 2,000 miles west.

Forest fires have always been a point of concern for scientists evaluating the rate of climate change; however, the record number of wildfires in 2020 has burned over ten million acres in the United States alone. This drastic increase in damage compared with previous decades paints a stark image of the devastation of climate change.

Unlike the average number of acres burned in the United States in 1984, with merely 1,148,409, 2020, over 10,122,336 acres burned in 2020. Raging fires consumed 3,544,031 acres with around 4,332 fires in the U.S. just in September 2020 alone. Due to moderate to severe droughts in western states, the number of acres burned doubled from 4.7 million to 10.1 million in 2020. Most of the forests burned in 2020, in California, were due to a series of lightning strikes in August of that year. In fact, these fires, later named the August Complex Fire, started hundreds of fires in Northern California and were recorded to start the largest fires in California history, burning over 1.03 million acres in seven counties from August to November 2020.

To understand why there has been a drastic increase in the acres burned by forest fires in recent years, it is vital to evaluate what allows a fire to burn. Fires require heat, oxygen, and fuel. The three ingredients needed to start a fire are otherwise referred to as the ‘fire triangle’ and without all three elements, the fire will extinguish. Conditions must be ideal for any forest fire to burn. This then directs one to the question as to how the conditions have changed.

Climate change is a complex term that encompasses a vast number of leading factors such as burning fossil fuels, increased production of livestock, and deforestation. It is causing changes in our environment beyond just temperature. The most ideal condition for forest fires happens to be hot and dry landscapes. The National Interagency Coordination Center (NICF) found that in 1985 there were a total of 82,591 fires in the U.S. and in 2017 there were a total of 71,499 fires. It would seem that the frequency of fires has decreased. However, the number of acres burned in 1985 was 2,896,147 whereas the fires in 2017 burned 10,026,086 acres. That is well over a 7 million acre increase in area burned. Unlike the small, short fires experienced in the mid 1980s, the fires today are burning longer and decimating wider landscapes. This is a definitive sign that the conditions that enable forest fires to burn are changing, and for the worse.

There are two ways that forest fires start. The first is natural, meaning that the fire was started by lightning or the rare occasion of a natural combustion of dry fuel such as sawdust or leaves. The second, and most frequent cause of fires, are human-caused fires started due to  smoking, camping equipment, camp-fires, and other miscellaneous causes. Though human-caused fires make up nearly 85% of all wildfires in the U.S., oftentimes the fires that burn more acres are naturally caused fires. Human-caused fires are typically detected quickly and put out, whereas natural fires can go unnoticed and burn for days. However, both natural and human-caused fires burn best in dry regions.

Red suns are not common. In fact, there has to be abnormally dry and dusty air in order for a red sun to appear too far from the fire’s origin. The red sun and extreme forest fires are a harbinger of the dangers of climate change for many people. As Sarah Infante ‘22 said, “I think forest fires are a reminder to us of how selfish humans innately are. We pride ourselves on all that we have built up from the earth, but we are letting our forests burn the same forests that gave us the resources in the first place to make our buildings, to make our skyscrapers, and to make a place we can call home,” Infante said, vocalizing what many current climate change activists have argued.

Despite the scale of this pressing issue, there is much that every individual can do to contribute to reducing climate change and healing our forests. From reducing the electricity that we use, which is powered by coal, oil, and gas, to taking public transportation and bikes instead of individual cars, each person can contribute a small change that will have an impact in the long run.
Unlike the small, short fires experienced in the mid 1980s, the fires today are burning longer and decimating wider landscapes. This is a definitive sign that the conditions that enable forest fires to burn are changing, and for the worse.