Steamboat’s Reawakening: Erraticism, or Something More?

Yellowstone’s largest active geyser is announcing its presence to the world -- explosively. 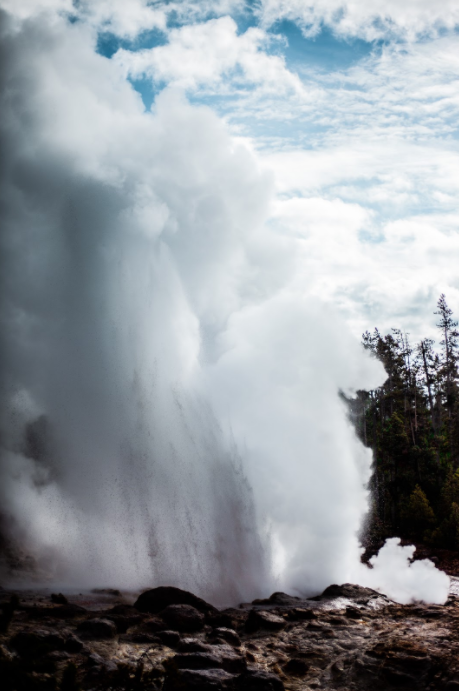 Steamboat Geyser, Wyoming, U.S.A. Its eruptions can shoot boiling hot water and steam hundreds of feet into the air.

Steamboat, the world’s tallest active geyser located in Yellowstone, has been erupting nonstop for nearly 3 years. Breaks in between the geyser’s eruptions last anywhere from four days to 50 years, but since March of 2018, Steamboat has showcased an incredible 109 eruptions.

In total, there have been more major eruptions just in these last couple years, than in the fifty years before that.

Geysers are hot springs under pressure that occasionally erupt and send blasts of scalding water and steam into the air. Their reservoirs underneath are where water gathers, to be shot out in blasts of steam. Steamboat has a comparatively deep reservoir, meaning it is under more pressure to create larger eruptions.

So, where to begin the investigation? The most reasonable place to start would be looking into the geyser itself, which has been incredibly sporadic and unpredictable in its eruptions. In fact, Steamboat’s erraticism is nothing new. From  2015 to 2018, Steamboat had been completely dormant, only to reawaken beginning in March 2018 with a stream of continuous eruptions. Which leads to the question, why?

Possible causes for Steamboat’s erratic behavior include earthquakes, precipitation, and changes in Yellowstone’s elevation. Earthquakes actually help to keep geysers running as they can dislocate mineral deposits that sometimes block the flow of hot water spewed in eruptions. However, many of these are not felt above Earth’s surface, and even fewer are powerful enough to change Steamboat’s underground plumbing in a way that would explain its reawakening.

Rain and snowmelt could also be a factor in Steamboat’s irregular behavior. It can affect the amount of water that reaches geysers; this influx of fuel could lead to more frequent eruptions. This is supported by the observation that more eruptions occurred between late spring and midsummer, when Yellowstone’s snow melts.

A change in elevation has been tracked in a selection of Yellowstone the size of Chicago, which has been essentially “breathing” in and out. Research suggests that magma is trapped underneath the basin, building up pressure and causing the elevation to rise; when it can escape elsewhere, the elevation lowers. It has been suggested that the cause of this is hydrothermal fluids shifting underneath the surface of the Earth, and is also being considered as a cause for Steamboat’s reawakening.