The new train hall is more than a passenger hub. Commuters can now explore the dining options, view the artwork, and enjoy state-of-the-art amenities under a stunning glass skylight. 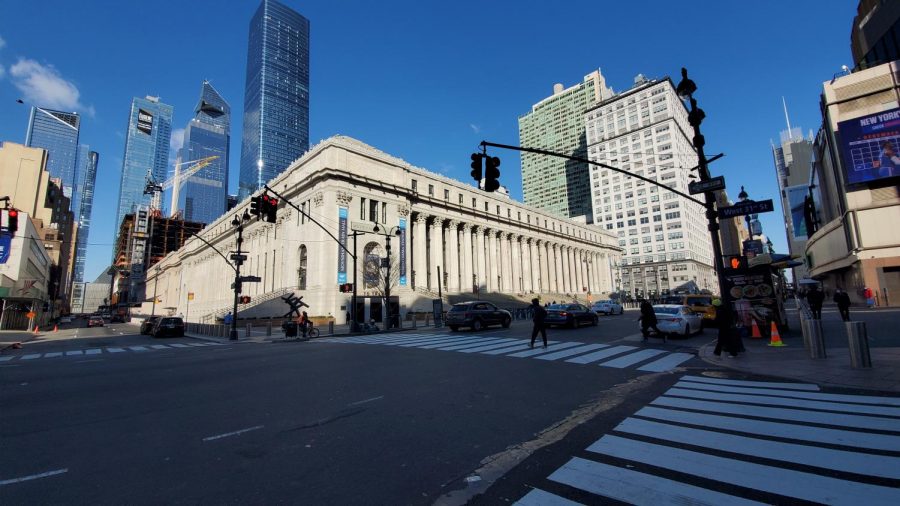 A hidden gem in New York City, the elegant Moynihan Train Hall humbly sits in the former Farley Post Office below the towering skyscrapers in Midtown.

Despite the great challenges presented by the COVID-19 pandemic, the MTA has made great strides to improve the passenger experience while commuting within New York. The new Daniel Patrick Moynihan Train Hall and the implementation of the swipeless OMNY payment system are two of the new features that New Yorkers can look forward to this year.

Originally constructed in 1910, the majestic Pennsylvania Station directly connected New York to the south by rail for the first time. During its tenure, the building was glorified for its grand architecture, becoming a notable New York landmark, and having served over 1 billion passengers by 1935. However, against strong public opposition, Penn Station was demolished in 1963 and plans were introduced for the new Madison Square Garden to be built in its place.

The station was moved underground for almost half a century, gaining popularity for its deteriorating catacomb-like hallways and lackluster commuter experience when compared to the nearby Grand Central Terminal. Through the 2010s, the station experienced a ridership boom, operating at nearly three times its daily 200,000 passenger capacity and leading to calls to renovate or rehouse the deplorable transit hub.

“Through Pennsylvania Station one entered the city like a god. Perhaps it was really too much. One scuttles in now like a rat,” said art historian Vincent Scully when describing the run-down station in 2012. Construction of the new train hall took place through the 2010s which included renovating the tunnels running under the Farley Post Office and converting the facility to accommodate commuters. The building is now named after the former New York Senator who championed the plan to restore Penn Station.

Newly opened in January 2021, the train hall possesses state-of-the-art amenities, bright LED displays, and art pieces that are featured behind the Beaux-Arts façade of the former USPS building. Rebuild Penn Station is the mastermind behind this development which focuses on three main points: the reconstruction of the grand spaces of the original Penn Station, the creation of create a modern transit hub serving the subways, commuter rails, and Amtrak, and the redevelopment the area around Penn Station to serve as a world-class destination.

“It is one of the most, or the most important strategic transportation site in New York City, and it was for all the wrong reasons torn down, and we have not made many good decisions since,” said Rebuild Penn Station Chairman Sam Turvey. “We believe that if you were to do something as meaningful as rebuilding the original Penn Station, the benefits to the city and to the region would present a once in a century opportunity to get something right.”

On the passenger concourse, escalators descend to the tracks below a 92-foot high skylight and an Art-Deco style clock. Passenger waiting rooms and the exclusive Amtrak Excelsior lounge surround the concourse, providing commuters with power outlets and USB-ports. Currently, the only victuals offered are found at Starbucks, but a food hall and other retail stores are expected to open this year.

Other art pieces featured at the train hall include Penn Station’s Half Century, a set of photographic panels along an 80-foot wall by Stan Douglas, Go, a stained glass triptych on the ceiling designed by Kehinde Wiley, and The Hive, a sculptural group of skyscrapers hanging from the ceiling by artist duo Elmgreen and Dragset.

Another new feature is the systemwide implementation of the OMNY payment system which will phase out the MetroCard by 2023. This new system allows riders to tap their contactless bank cards, smartphone, or smartwatch to access the system rather than the pre-existing swipe method. Tap-and-go payment systems are already in use in other American cities such as Boston and the District of Columbia.

Lower ridership during the Coronavirus pandemic allowed OMNY to be deployed ahead of schedule with significantly fewer commuter disruptions, and it is now ready for use in all stations and buses. The MetroCard can still be used systemwide, but it will be fully replaced by OMNY in the coming years. Great success has been achieved with the payment system having recorded over 21 million taps since its first installation in May 2019.

In spite of these great successes, the MTA is facing $12 billion in lost revenue through 2020 due to nearly 90% fewer passengers utilizing their services during the apex of the Coronavirus pandemic. Moreover, the offering of free bus rides throughout the spring and summer months caused profits to dwindle further. At least $8 billion in federal relief is required to avoid a 40% service reduction on commuter rails, permanent subway shutdown between 2 and 4 a.m., and thousands of employee layoffs. President Biden’s stimulus package will direct $6 billion towards the MTA, so the hope is that many of these proposed cuts will now be averted.

Future projects to improve the commuter experience in New York include connecting the High Line Park to Penn Station, renovating the overcrowded Port Authority Bus Terminal, and funding the Gateway Project to improve infrastructure and increase capacity and access to New Jersey and the rest of the Eastern seaboard.

Through the pandemic, the MTA has lived up to its catchphrase of “Moving Forward,” but New Yorkers can continue to reap the benefits of these innovations in public transit as the city begins to reopen this spring.
“We believe that if you were to do something as meaningful as rebuilding the original Penn Station, the benefits to the city and to the region would present a once in a century opportunity to get something right,” said Sam Turvey, chairman of Rebuild Penn Station.