The Events Surrounding the Takeover of the Capitol Building on January 6th, 2021

The Capitol riots were incited in order to attempt to prevent the electoral college’s certification of Joseph R. Biden as the 46th president of the United States. 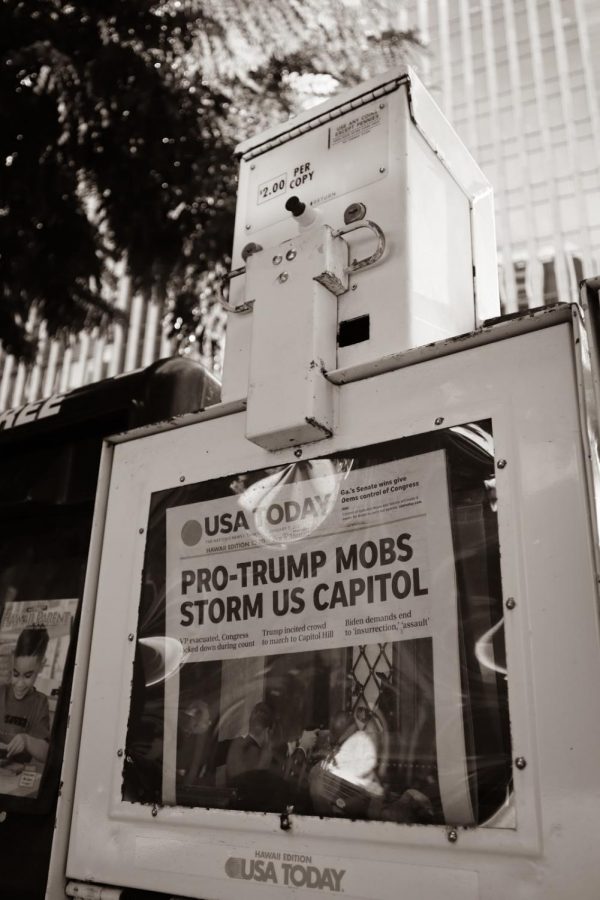 News of the Trump mobs at the Capitol Building made the front page of U.S. Today. “It honestly sounded like something out of an apocalypse,” said Reese Villazor ’21.

As we flipped our calendars from 2020 to 2021, many Americans were optimistic about the future. The new year would bring the inauguration of Joe Biden and much-needed stability to the United States, along with progress regarding COVID-19 vaccine distribution.

However, it became clear early on that the turmoil of 2020 carried on into the new year. On January 6th, 2021, Pro-Trump rioters, including members of the Proud Boys, QAnon, and white nationalists breached the Capitol, creating a sea of Trump and Confederate flags. The rioters tore down American flags and replaced them with Trump flags. Thousands of Trump supporters pushed past police barricades, scaling walls and breaking windows to enter. These riots ultimately resulted in the deaths of four Pro-Trump terrorists and one police officer.

Many assert that one of the largest driving forces behind the riots was Trump’s speech at the Ellipse, which was delivered earlier that Wednesday. In his speech, Trump drove his supporters to take action, summoning them to gather at the National Mall and protest this allegedly unfair — “stolen” — election. The speech included inflammatory rhetoric such as, “If you don’t fight like hell, you’re not going to have a country anymore.” Trump’s statements came after former Vice President Mike Pence informed Trump that he would be unable to overturn the results that would certify Joe Biden as the 46th president of the United States. Unwilling to accept this, the former President condemned Pence for being unloyal.

“When Trump has sparked a wave of anger directed at the credibility of an election and frequently uses incendiary language in speeches to his supporters, it’s not hard to connect the dots as to why they have reacted in the way that they did,” said Reese Villazor ’21.

Trump’s lawyer, Rudolph Giuliani, also spoke at the Ellipse and egged on Trump supporters by calling for a “trial by combat” against the Democrats.

On January 6th, 2021, at around 12 p.m. Eastern, the mostly maskless mob began to form.  Meanwhile, inside the Capitol, lawmakers held in lockdown were surprised and many hid under their seats while wearing gas masks to protect themselves against the tear gas that had been released. The chaos and unrest lasted for hours, and Trump eventually issued a statement telling his supporters to back off — but not before he mentioned that he loves them. Finally, at 8 p.m., the building was secure enough for lawmakers and senators to return and finish counting the vote to establish Biden as the newest president.

Some memorable and almost inconceivable instances from the riot include a maskless man lounging on Speaker Nancy Pelosi’s desk, another man freely carrying the Confederate flag on his way to the Senate, and a third rioter posing proudly with the stolen Speaker of the House podium. There was also footage of police officers smiling and taking selfies with Trump rioters instead of securing the building.

Although these events rocked the foundations of American democracy, after the inauguration of Joe Biden some feel that they have regained a portion of their hope. “Watching the inauguration gave me hope that the government is taking steps to improve America. However, Donald Trump’s influence will still affect the country and we can’t lose sight of that,” said Hannah Goo ’21.

Yet, many people agree that Americans cannot just hope that change will come with the presidency of Joe Biden; instead, change must be actively pursued. “I think the country needs to address police reforms in a manner that stresses reallocating funds and training police. I think that President Biden should focus on these standpoints and emphasize that these reforms are to help the citizens of this country to become safer,” said Maya Gupta ’21.
“When Trump has sparked a wave of anger directed at the credibility of an election and frequently uses incendiary language in speeches to his supporters, it’s not hard to connect the dots as to why they have reacted in the way that they did,” said Reese Villazor ’21.