Looking Back At Trump: A President For the History Books

The Presidency of Donald Trump was like no other, as it was scandal-filled, controversial, and unconventional in every way possible. 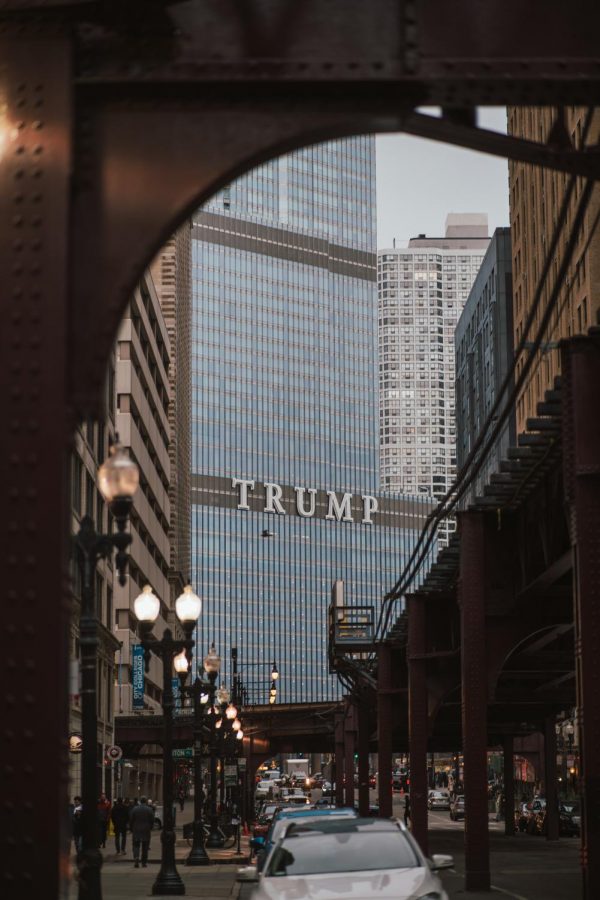 Here is the Trump Hotel in Chicago, Illinois, one of many Trump properties nationwide.

In his four years as President, Donald Trump sent the country on a path where it had previously never gone before. His presidency, marked by scandals, controversy, and a defiance of tradition, left all Americans affected. His behavior and attachment to controversial figures were deeply questioned by many, and his actions brought great peril to America’s democratic framework. Trump has cemented his legacy as a man who changed the political landscape in America, while simultaneously changing the landscape of the Republican Party of which he is now the de facto figurehead.

President Trump was inaugurated on January 20th, 2017, and it did not take long for him to spark change. Days into his presidency, Trump signed a Muslim travel ban, barring residents from seven majority-Muslim countries from entering the United States. The ban was seen as hypocritical, as it originally did not include certain nations that had been adversaries of the United States, such as North Korea and Venezuela. However, since the ban was targeted at majority-Muslim countries, those nations were temporarily protected until they were added to the ban a couple of weeks later. Many people, both foreign and domestic, interpreted this act as xenophobic, leading to protests and in some cases, violence. Trump, following a rebuke from the courts on his first ban, signed a second ban, targeting six new countries and temporarily suspending travel.

Later that year, riots occurred in Charlottesville, Virginia, due to protestors advocating to preserve the state of Robert E. Lee, a former confederate general. Trump became defensive, as he was blamed for inspiring violent protestors. Following the attacks, Trump claimed that there were “very fine people on both sides,” referring to the peaceful protestors and the alt-right, neo-Nazis. Many felt Trump was aiding and abetting anti-Semitic and racist causes, throwing liberals and even some conservatives into a frenzy.

Flash forward to 2018, where Trump revealed his hard-line immigration policies. The Department of Homeland Security imposed a “zero-tolerance” policy at the United States-Mexico border, forcing children into cages and separating them from their parents. The policy faced major backlash, leading to Trump reversing the order a few months later. However, the policy continued without government regulation. In 2020, it was reported that five hundred and forty-five children were still separated from their parents, and the government had no plan to reunite them.

Trump’s policies, along with his unfavorability in national polls, led to a Democratic takeover of the House of Representatives in the 2018 midterm elections, which was heavily seen as a rebuke of Trump. Trump was then forced to deal with a Democratic House that brought opposition he had not faced during his first two years in office.

On the brink of this shift in power, Trump made one last attempt to get through his number one priority, the border wall. The Democrats promised Trump funding if he complied with Deferred Action for Childhood Arrivals (DACA), but Trump refused simple negotiations, propelling the longest government shutdown in American history.

With Democrats now controlling the House and the 2020 election already underway, Trump sought help. On July 25th, 2019, the day following Robert Mueller’s testimony regarding the Russia probe, Trump called upon newly elected Ukrainian President Volodymyr Zelensky, asking him to announce an investigation into Hunter Biden’s dealings with a Ukrainian oil company. Many people saw this as an attempt at election interference, as Joe Biden, Hunter’s father and Trump’s biggest rival at the time, was the Democratic Party’s frontrunner for the Presidential nomination. After the information of Trump’s phone call was revealed, House Speaker Nancy Pelosi announced an impeachment inquiry, which was eventually succeeded by a vote to impeach in December 2019.

When the trial got to the Republican-controlled Senate in January 2020, Trump was easily acquitted, with Republicans voting not to hear testimony from witnesses.

However, 2020 was only just beginning, in what turned out to be a year like no other. Early in the year, Trump received warning of a potential virus threat that had already been spreading in multiple countries. Trump tried to downplay the threat, which proved to be fatal. Eventually, COVID-19 reached the United States, forcing mass lockdowns, sickness, and death.

Trump’s inaction at the beginning of the pandemic was criticized by many. He was heavily scrutinized for telling journalist Bob Woodward he wanted to “play it down” in hopes of not creating panic. During a coronavirus health briefing in April 2020, Trump suggested injecting bleach and putting sunlight into the body to kill the virus, which was quickly debunked by scientists. In October 2020, President Trump and First Lady Melania tested positive for COVID-19, with Trump being taken to the hospital after showing symptoms. Trump was immediately treated with exclusive drugs and antibiotics, leading to a speedy recovery.

Then, the general election approached. Trump faced Joe Biden, the former Vice President under President Obama, who was previously detailed in the impeachment inquiry. Early on election night, Trump was leading, which prompted him to declare that he had “won the election in a landslide.” However, as more votes were tallied, Biden took the lead in many key swing states, like Pennsylvania and Wisconsin, and won the presidency. Trump became the first president in twenty-eight years to lose his bid for re-election, but not without his efforts to overturn the results.

Trump immediately refused to concede, calling the election rigged and stolen. His efforts were widely seen as desperate by Democrats, with Trump vehemently trying to overturn the results of what the states and federal government viewed as a free and fair election. Trump lost nearly sixty court battles, including one with the Supreme Court. Even after the Electoral College voted to declare Biden the winner, Trump still set out to change the results, continuously claiming that the votes were fraudulent, eventually seeking out the Department of Justice and individual lawmakers, like Rudy Giuliani, to overturn the election in his favor.

On January 6th, 2021, while Congress was counting and certifying Biden’s victory, a mob stormed the United States Capitol in an attempted insurrection. Members of the mob said they were inspired by Trump and his allies who plotted to overturn the results of the election. They hoped to harm politicians who sought to defend Joe Biden’s presidential win. The rioters stated their intentions to go after Vice President Mike Pence, and come after Speaker of the House Nancy Pelosi. Trump was quickly impeached for incitement of insurrection, becoming the first president in United States history to be impeached twice. The Senate acquitted Trump again with a 57-43 vote, which was the most bipartisan condemnation of an impeached president in U.S. history.

Along with his personal controversies, Trump also changed the landscape of the country in terms of some of his long-lasting policies. He appointed three conservative justices to the Supreme Court, cementing a conservative majority on the high court. Trump also cut taxes that heavily benefited the rich, and created a new branch of the military called the Space Force. Trump also set forth massive criminal justice reform, seeking to be the “law and order” president in support of the police force. This messaging became clear following the murder of George Floyd, leading to nationwide protests. In Middle-Eastern relations, Trump and his cabinet negotiated peace deals between Israel and other countries such as Bahrain and the United Arab Emirates, which was lauded by many.

It goes without saying that Donald Trump’s presidency was historic. There were many firsts and history-making moments, many of which will be remembered in infamy. Trump’s effect on American politics has been seismic, yet even though he is no longer the president, Trump’s story has yet to come to a close.
Trump has cemented his legacy as a man who changed the political landscape in America, while simultaneously changing the landscape of the Republican Party of which he is now the de facto figurehead.