Environmental Impacts by Presidents of the Past, Present, and Future

An analysis of President Obama, President Trump, and President Elect Biden’s impact upon the environment 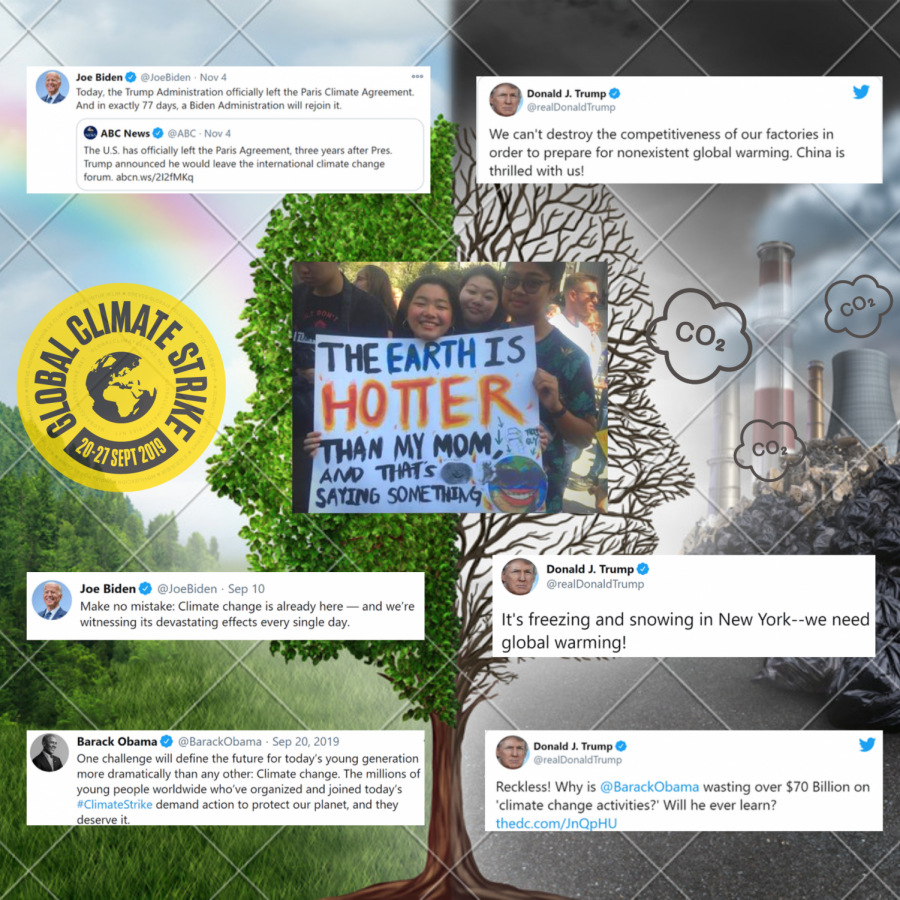 As Donald Trump’s presidency comes to an end, this is as good a time as any to review the impact that his administration has had upon the environment. Former President Barack Obama’s two terms in office set America on the right track to becoming more sustainable. However, during his term, President Trump revoked most of Obama’s efforts, and he has undone much of America’s green progress. President Elect Joseph Biden has shared ambitious goals to remedy Trump’s impact upon the environment.

Climate change is an umbrella term for a broad range of changes in our planet, like ocean acidification or heavy rainfall. This has become a significant problem in the present day because human activities, such as burning fossil fuels, have increased greenhouse gases and accelerated climate change at an alarming rate. As a result, we see varying climates and increasing agricultural threats, along with pollution, droughts, heatwaves, sea levels, and the frequency and intensity of hurricanes. These effects can already be seen today as contributors to many disasters such as the California wildfires and intense hurricanes.

The visible effects of climate change have forced the public to acknowledge that something needs to be done, and as soon as possible. Sixty-seven percent of Americans believe that the Federal Government is not doing enough to reduce global climate change’s effects. The young have also shown their discontent with how the government has handled climate change through participating in large scale climate strikes. Sara Poon ’21, a member of the Climate and Resilience Education Task Force Youth Steering Committee and Bronx Science’s Green Team said, “I feel like there are certain parts of America that are certainly trying. However, not enough is getting done.”

During his second presidential term, Obama acknowledged the threat of climate change and took many steps to reduce it. In 2015, Obama’s Environmental Protection Agency (EPA) released the final version of the Clean Power Plan. This plan would reduce the power sector’s carbon pollution by 32% based on the 2005 levels, which would be 870 million tons less of carbon pollution. The Clean Power Plan would also enforce carbon emission reduction standards on states, based on their current energy consumption, and it would form national limits on which power plants can produce mercury, arsenic, and other toxic air pollutants.

The plan was also the foundation for an agreement with China in 2014 where both countries agreed to drastically reduce their greenhouse emissions. This was a huge step in the right direction, since the United States and China are two of the world’s largest emitters of greenhouse gas. Although this Clean Power Plan was supported by most Americans, fossil fuels and utility companies expectedly opposed this plan as it was disadvantageous for them.

In 2016, President Obama joined the Paris Climate Agreement by signing an executive order. He chose to sign an executive order instead of going through Congress, after seeing Congress reject former President Bill Clinton’s proposal to join the 1997 Kyoto Protocol, another international climate agreement. The Paris Agreement is supported by 189 countries and aims to prevent the planet’s temperature from rising 2 degrees Celsius and to only allow a 1.5 degree Celsius increase, compared to pre-industrial levels. It is crucial to avoid an increase of more than 2 degrees Celsius, as climate experts state that it would lead to irreversible global consequences. In regards to President Obama’s environmental policies, Farwa Batool ’22, a student at Townsend Harris High School, said, “I know we made bad choices in the past, but we did go towards improving the environment, or at least reducing our impacts.”

Although it seems like Obama was a very eco-friendly president, most of his green initiatives were passed during his second term. During Obama’s first term, he avoided greenhouse gas regulations in order to focus on health care. However, even after his Affordable Care Act was passed, Obama took little green action due to fear of political consequences. States and environmental non-governmental organizations have been fighting to regulate power plant emissions since 2006, but only in 2010 after threats of a lawsuit did Obama’s Environmental Protection Agency (EPA) finally take action. Unfortunately, many of his late 2016 initiatives can easily be stopped by the Congressional Review Act, which requires a majority vote from the House of Representatives and Senate and the president’s signature. Initiatives that are still in court can also be revoked by the president without much effort. Due to this, President Trump was able to undo many of Obama’s regulations upon entering office.

Trump’s presidency left a large stain on the environment. In fact, Trump has removed 125 rules and policies aimed to protect the nation’s air, water and land. One of the policies that President Trump has revoked is Obama’s signature Clean Power Plan. The opponents of the Clean Power Plan argued that Obama’s EPA did not have the authority to regulate emissions of the power sector as a whole. To replace the Clean Power Plan, Trump enforced his “Affordable Clean Energy” which regulates carbon pollution, as mandated by law, but requires minimal changes to the power utility industry. A 2019 study in the Environmental Research Letters states that the “Affordable Clean Energy” would have a negligible reduction in greenhouse gas emissions and could be compared to no policy at all.

President Trump has also changed climate change’s classification as a national security threat so that less money could be used to remedy it. Instead, Trump’s National Security Strategy aims to regain the United States’ economic competitiveness in the world and ignores most environmental impacts.

In June 2017, President Trump pulled out of the Paris Climate Agreement, which makes the United States one of only six countries in the world that are not a part of the pact. President Trump claimed that staying in the Paris Agreement would dampen America’s growth and sovereignty. This decision not only affects America but also the other countries in the pact, as they would have to set stricter emissions-reduction targets in order to reach their goal, which will be difficult to achieve. Batool ’22 said, “Coming out of the Paris Climate Agreement and trying to go towards more coal and fuel has been really devastating for the environment.” Although the United States has now officially left the agreement, many Americans still support the Paris Agreement. In fact, hundreds of local governments and businesses have joined a movement called “We Are Still In,” where they work together to support climate action and pledge to uphold commitments of the agreement.

More recently, President Trump has opened up more than half of Alaska’s Tongass National Forest, or over 9.3 million acres, for logging. The Tongass National Forest is the world’s largest intact temperate rainforest with some trees living in it being up to 1,000 years old, allowing the forest to absorb more carbon than any other forest in the United States. The forest also has the highest density of brown bears in North America. Logging the forest by cutting down trees for timber or pulp would destroy a major carbon sink and reduce biodiversity.

For a list of steps taken by the Trump administration and Congress to reduce federal climate alleviation click here.

Our president-elect, Joe Biden has a few plans to steer the United States back in the right environmental direction. Some of his proposed plans are to rejoin the Paris Climate Agreement, enforce stricter gas mileage standards, and have a 100% clean energy economy and net zero emissions by 2050. To achieve net zero carbon emissions, carbon-free forms of energy such as nuclear, hydropower, and biomass energy must be used. However, this has become a controversial issue, because nuclear and biomass energy also have detrimental consequences. Nuclear energy produces radioactive waste, which remains radioactive and detrimental for human health and the environment for thousands of years. Biomass energy is a renewable and carbon neutral energy source that burns organic material from plants and animals into energy. At first glance, this seems like a great energy source, but many experts argue that biomass energy promotes cutting down trees that would otherwise be used to absorb the large amounts of carbon already in the atmosphere.

Additionally President Elect Biden has chosen former Senator and Democratic presidential candidate John Kerry as his climate convoy. Kerry served as Obama’s Secretary of State and helped persuade 200 nations to join the Paris Agreement. Many believe that Kerry is well suited for the job, due to his experience with the challenge of persuading countries to take action against climate change.

All in all, Trump’s time as president is coming to an end, and a new president with a different environmental stance is coming into office. Regardless of the direction that Biden steers America towards in terms of environmental policy, we can all do our part to help the planet by advocating for green policies, by reviewing our unsustainable habits, and through implementing eco-friendly habits that are as simple as reducing and reusing.
Sara Poon ’21, a member of the Climate and Resilience Education Task Force Youth Steering Committee and Bronx Science’s Green Team said, “I feel like there are certain parts of America that are certainly trying. However, not enough is getting done.”