The Generational Divide in Politics

Younger generations are becoming more and more progressive. What does this mean for families? 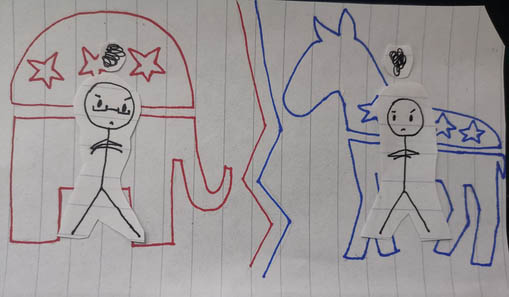 The shift towards progressivism in younger generations is causing new divisions in politics.

Political polarization is now at its highest point since the Civil War. Republicans are running claims of voter fraud despite being constantly rejected in courts while Democrats are encouraging President Elect Joseph Biden to follow up on his progressive policies such as clearing student debt. However, a topic remains untouched in political discussion: the generational divide between old and young voters.

Although it is not discussed frequently, it is a highly important issue. Gen Z, the next generation of eligible voters, are more diverse, educated, and familiar with technology than older generations. They favor change and progressivism and are generally more supportive of racial justice, immigration, environmental protection, and gun control. These factors may influence how candidates campaign and propose policies for the next several years.

The generational divide is not limited to party lines. During the Democratic primary in Michigan, 77% of voters under 30 chose Bernie Sanders for his progressive policies, while 72% of voters over 65 favored Joseph Biden. This means that while our current politics are right wing, this will likely change, as younger voters continue to encourage more leftist policies.

“I often have these thoughts about how what we define as progressive might become conservative in the future,” said Shi Yuan Liu, a senior at Brooklyn Tech. “Perhaps, the newer generations will have even more progressive ideas of which the older generation would not approve.”

The divide is not just visible on a statistical scale; it is also affecting families and their ability to see eye to eye. According to a study, half of Americans reject their parent’s political beliefs. While first generation Vietnamese view the Democratic left as communist and radical, their sons and daughters welcome many of their proposals. For some high school students, this is a problem that is close to home.

“Although both of my parents are reasonably liberal, the rest of my family is not,” said Amelia Volpe ’21. “I’ve gotten into countless arguments with my extended family over President Trump, white privilege, affirmative action, and abortion. It’s definitely caused a lot of stress, but I feel it’s more important to educate them rather than just give up and declare them hopeless. As the most progressive person in my family, I’ve gotten some backlash, but I refuse to let these comments get to me.”

Liu also finds it difficult to have conversations with her parents even though they are both registered Democrats. “I tend to have a broader perspective and mindset when it comes to making an impact or change, whereas my parents mainly focus on the issues that affect them directly,” she said. “It creates this tension whenever I try to explain new concepts to them. They will either not understand or they will not make an effort to understand my points.”

Even though generational differences have caused tensions and arguments among students and their parents, it is clear that a new era in politics is beginning to rise, one that may change the direction of American political discourse for years to come.
“It’s definitely caused a lot of stress, but I feel it’s more important to educate them rather than just give up and declare them hopeless. As the most progressive person in my family, I’ve gotten some backlash, but I refuse to let these comments get to me,” said Amelia Volpe ’21.