In a crowded field, how will each of the 2021 City Hall hopefuls address the challenges facing the nation’s largest public school system? 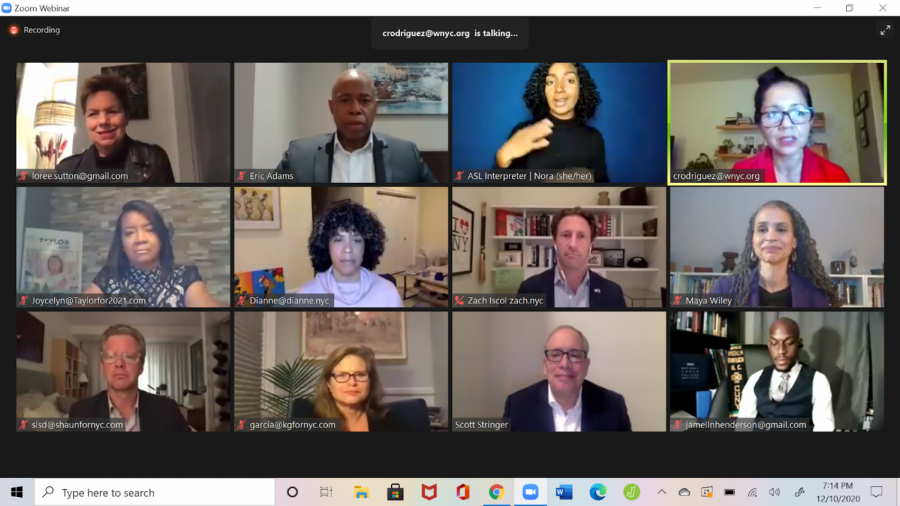 The fear and anxiety from the 2020 presidential election may be over, but for New Yorkers, another very important vote is just around the corner: the 2021 mayoral election to replace current mayor, Bill DeBlasio.

This election’s candidates will face a whirlwind of obstacles the city has never seen before: the relentless COVID-19 pandemic, an economic crisis that has left more than half a million New Yorkers unemployed, the most segregated public school system in the country, and unrest concerning the police.

Fortunately for New Yorkers, nearly a dozen diverse and enthusiastic public figures have entered into the race for mayor, including lifelong public-office holders, successful businessmen, veterans, and nonprofit CEOs.

Aside from controlling the Coronavirus pandemic, one of the most pressing issues on the ticket for the primaries in June 2021 is education and reform to NYCDOE, the most segregated public school system in the country. The switch to remote/blended learning has only deepened disparities between white and Black students: while serving around 1.1 million students, the majority being Black and Hispanic students, 12,000 more white students have been able to return to public school buildings than Black students. Remote learning has proven to be far less effective than in-person instruction, causing Black students to fall farther behind their white peers.

2021 mayoral candidate Eric Adams, a former NYPD police officer, the founder of One Hundred Blacks in Law Enforcement Who Care, and the current Brooklyn Borough President has expansive plans for the public schools. “I will desegregate our schools, reinvent our school calendar to expand instruction options and make our students more competitive, significantly expand school and instruction options, prioritize universal access to both online and in-person classes, feed our kids only healthy food in schools, and focus on the holistic growth of every student,” he claims on his website.

In an interview with WNYC’s Brian Lehrer on his segment ‘Meet the Candidate’, Adams spelled out his plans for education in more detail. “I want to totally change how we educate our young people in the city, starting from the first thousand days of life. Every mother and her first child will receive a doula who learned nutrition, brain development, how to assist in the development of the child during those early years of neuron growth so that they can be prepared for 3-K and pre-K,” said Adams.

Candidate Maya Wiley, a civil rights lawyer, DeBlasio’s former lawyer, and the former chair of the civilian complaint review board, also has innovative ideas for re-shaping the public school system. Some of these include high schools without walls, which she says on her website would “untether students from particular assignments to specific buildings to open up new opportunities for learning.”

Another idea that Wiley has proposed is repurposing vacant storefronts to use as extra classroom space, which would help with reducing class sizes and would support business owners. She says on her website that “We must transform rather than tinker by and invest in innovation and equity that excites residents about public schools.”

Candidates have consistently commented on Mayor DeBlasio’s decisions for public schools during the pandemic. In response to DeBlasio’s school shutdown in November 2020 due to the Coronavirus pandemic, Kathryn Garcia, a former sanitation commissioner and top official at the Department of Environmental Protection under former Mayor Michael Bloomberg, criticized his decision. She said on ‘Meet the Candidate’ that “There was clearly evidence that the virus was not being transmitted in schools. It makes a huge difference for particularly little kids or kids with special needs to have in-person instruction. We’re losing perhaps a whole generation of children who are missing their education.”

Raymond McGuire, a highly successful businessman from Wall Street and the former vice chairman to Citigroup, supported DeBlasio’s recent decision to reopen elementary schools after being critical of his original decision to close schools, telling the New York Times that “Kids are safer inside a school building than outside of it. There are so many things about in-person learning that you simply can’t replicate in remote sessions.”

Despite not having spent much time in electoral politics, McGuire is running on his management capabilities. McGuire told Brian Lehrer on ‘Meet the Candidate’ that he plans on launching a “cradle to career” plan that would help students prepare for the real world all the way through college. He wants to “make certain that our students have the opportunity to get a job.”

Although coming out ahead as a leading candidate for the primary in June 2021, Scott Stringer, the city’s comptroller and former Manhattan Borough President, has yet to speak on any specific plans regarding public education. However, Stringer himself struggled with the decision to send his own children back to school. With his own experience in mind, he told ‘The New York Times.’ “We’re privileged parents, and we struggled, I just cannot imagine parents with very little resources who are going to have to really worry about their children falling further behind.”

Dianne Morales is another candidate who has garnered support from young leftists through plans for zoning reform and open enrollment in order to desegregate schools, as well as plans to remove the SHSAT (the Specialized High School Admissions Test). She states on her website that the test is a “tired approach of imposing one size fits all standardization as a narrow measure of value.” She wants schools to become a place ”where students learn to examine systems that create society as we know it.”

There are a number of other candidates in the race — Carlos Menchaca, Zach Iscol, Jocelyn Taylor, Loree Sutton, and Shaun Donovan — who have only made large claims on what they hope to accomplish with the public schools. It remains to be seen how they plan to accomplish these goals.

While the options for mayor may be overwhelming, one thing is clear, New Yorkers want someone who is competent and resilient. The public school system is a paramount issue that cannot be overlooked by the mayor, seeing that it affects 1.1 million students, their families, and tens of thousands of potential voters. Whoever succeeds Mayor DeBlasio will be tasked with providing equitable and high-quality education to those 1.1 million students. The question is, who is up for the challenge?
This election’s candidates will face a whirlwind of obstacles the city has never seen before: the relentless COVID-19 pandemic, an economic crisis that has left more than half a million New Yorkers unemployed, the most segregated public school system in the country, and unrest concerning the police.