Rockin’ Around the Christmas Tree

There is one holiday tradition that the Grinch did not steal amidst the Coronavirus pandemic. 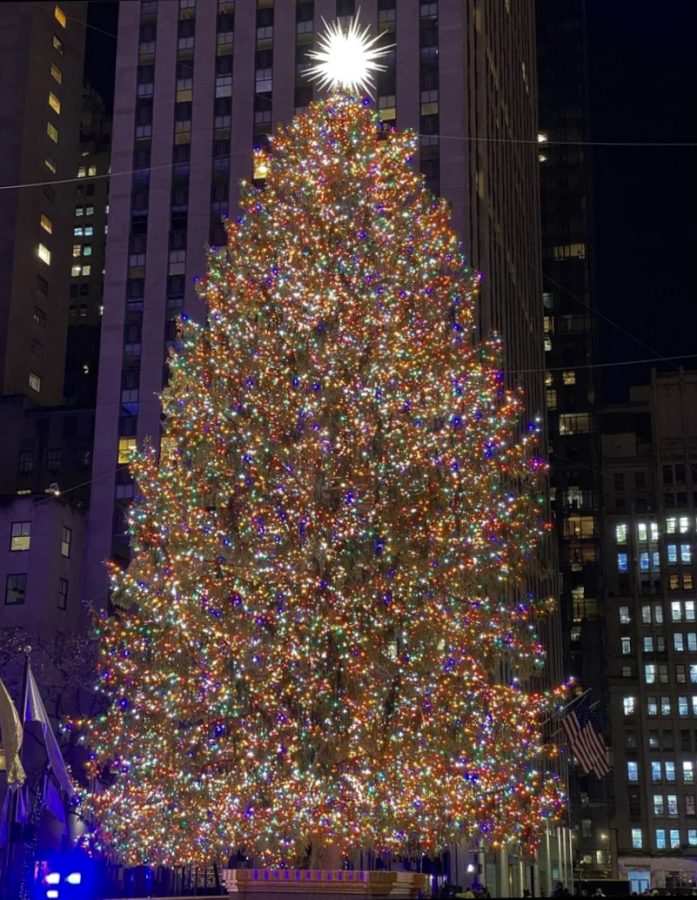 The Christmas Tree at the Rockefeller Center is beautifully lit with colorful lights and topped with a star encrusted with more than three million Swarovski crystal designed by Bronx Science alumnus, Daniel Libeskind ’65.

The Grinch has definitely stolen the holidays this year. From the Rockettes not performing at the Christmas Spectacular Show at the Radio City Hall for the first time in 87 years, to the cancellation of the ball dropping at Times Square, a  113 year tradition, this holiday season is bound to look very different, all due to the global Coronavirus pandemic. Fortunately, one tradition that was not canceled is the Christmas Tree at the Rockefeller Center. While thousands of people were looking forward to indulging in a beloved tradition amidst the pandemic, some were not very thrilled about the choice of the tree.

This more than 80-year-old tradition began when workers at the Rockefeller Center construction site gathered their money and purchased a 20-foot Christmas tree to express their gratitude to have jobs during the Great Depression. Since then, the criteria for picking the perfect tree has included its shape, its ability to support the heavy ornaments, and its “heartiness.” This year’s “perfect” tree is a 75-foot-tall, 11-ton Norway Spruce hailing from Oneonta, New York. It was was hauled to Manhattan on a 115-foot long trailer. Yet, many were quick to comment online on the unusually scraggly state of this year’s Norway Spruce. The tree appeared very frail and lopsided, standing two feet shorter and weighing one ton lighter than that of last year’s tree. Hannah Goo ’21 said, “The tree must have given itself a haircut like many of us during the quarantine. Could 2020 possibly get worse?” Similar to Hannah, many people posted memes on Instagram and have started a thread on Twitter, commenting on how the tree appeared to be a metaphor of 2020: even our smallest wishes were unable to be fulfilled.

The tree was not the only surprise of the night. An adult male Northern saw-whet owl, one of the smallest owl species in North America, was found hiding in the branches of the 75-foot-tall Norway spruce. Named Rockefeller, he was immediately taken to the wildlife center in Saugerties, New York, and was fed mice and water, as it is assumed that he was unable to eat for three days. Fortunately, the center announced that there were no problems found in Rockefeller’s x-ray and he was released back into the wild.

As for the tree, the Rockefeller Center spokesperson stated how at first, it may appear scraggly. This is due to the tree being fully wrapped, branch by branch, for a couple of weeks before it is cut and driven into the city on a flatbed truck for another couple of days. Today, all of the branches of the tree are spread out and appear to be more exquisite than ever. Unlike in the past, millions of people will not be able to gather to take pictures in front of the iconic tree, and social distancing restrictions are in place. From 6 a.m. to midnight, tree viewing entrances with social distancing markers are located at points on 49th and 50th Streets and 5th and 6th Avenues. Rockefeller Center Plaza, where the tree is physically located, is also closed from the public. Each visitor will have only five minutes to view the tree and masks must be worn at all times. Groups larger than four will be split into two groups.

On top of all the lights and ornaments is the star designed by Bronx Science alumnus, Daniel Libeskind ’65. The star is encrusted with more than three million Swarovski crystals and weighs more than 900 pounds. Sitting gracefully at the top of the tree, the star makes the tree brighter than ever. Many hope that this is symbolic of how there are only bright and happy days to come.
“The tree must have given itself a haircut like many of us during the quarantine. Could 2020 possibly get worse?” said Hannah Goo ’21.