New York City will see a record low number of tourists during this December 2020 holiday season as the Coronavirus pandemic continues to devastate the city’s hospitality industry. 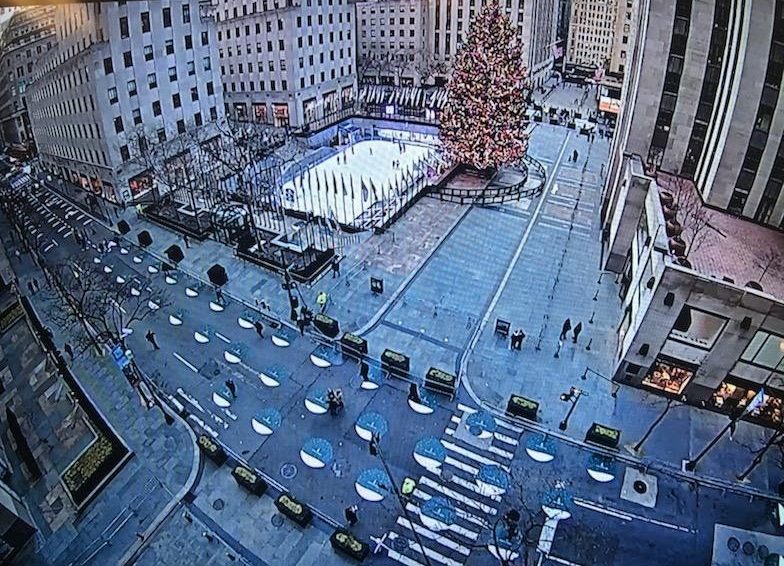 This overhead view of a deserted Rockefeller Center in December 2020 looks vastly different from previous months of December, when thousands of visitors would flock to this tourist attraction daily.

This past March 2020, New York City came to a staggering halt as all non-essential businesses were directed to close in an effort to curb the spread of the global Coronavirus pandemic. Many New Yorkers described the normally bustling city as a ‘ghost town,’ citing how once crowded places like Times Square, Penn Station, and Madison Square Garden were now completely empty.

When the first “stay home” directives were issued, few foresaw the prolonged effects that COVID-19 would have upon the city. The pandemic has resulted in extreme economic devastation that is particularly evident as we come near to the 2020 holiday season.

Last year, the city hosted 66.6 million tourists, with NYC & Company, the city’s official tourism board, citing record numbers of international visitors during the summertime and at the end of the year. This year, New York City may only see about a third of the number of tourists projected to visit, which foreshadows a bleak future for the city’s economy.

The hospitality industry in New York City is one of the most robust industries in the nation, providing almost 400,000 jobs to New Yorkers and collecting about $47.4 billion annually. It has been severely crippled by the Coronavirus pandemic and will continue to lose revenue if the number of COVID-19 cases continues to rise in New York City. Governor Cuomo recently banned indoor dining in the city in the hope that doing so will prevent more positive Coronavirus tests. However, these guidelines also have severe repercussions for not just restaurants, but for the entire hospitality industry. Without indoor dining in restaurants, there will be far fewer visitors inclined to come into New York City for dinner and a show (Broadway is also currently shuttered), or to roam the streets. As a result, restaurants, shops, and many other businesses in the city will see far fewer customers than in years’ past.

Due to social distancing restrictions and expected low audience turnout, Broadway will remain closed at least until May 30th, 2021, more than a year after it first shut down on March 2nd earlier this year. The Metropolitan Opera will also remain closed for the 2020-21 season, resulting in about $150 million of lost revenue. In addition, many New York City museums are closed or remain open at significantly reduced capacity. These are all New York City staples that attract millions of tourists every year, and their absence means New York will not gather nearly as many visitors this season.

Christmas in New York is often described as magical. From the moment that the Rockefeller Center Christmas tree is lit each year in early December, New Yorkers know that the holiday season has begun. Traditionally, during the month of December, the city is decorated with lights and filled with joy as people from all over the world flock to New York for the holidays. This 2020 holiday season promises to be very different, as the usually crowded Rockefeller Center and holiday markets are often almost empty. Anna Buhler ’21, a native New Yorker, said, “Sometimes, I cycle to Central Park and pass a lot of places that are usually crowded with tourists; now, due to the Coronavirus pandemic, they aren’t nearly as full as normal.” Even seemingly small city traditions are fading. Buhler noticed that there are not as many Christmas tree vendors on the New York City streets compared to past years, even though Christmas tree sales nationwide are at a record high, as having a Christmas tree at home brings a bit of holiday cheer to those who celebrate Christmas during this dark time of the pandemic. These signs all point to a somber holiday season in New York City this December 2020.

While New York City is relatively deserted, it is not nearly as desolate as it was when the pandemic first began last March 2020. “At the beginning of this pandemic, Times Square was pretty much empty. It was shocking to me, because it had always been this bustling place filled with tourists that native New Yorkers did their best to avoid. Now, it has gotten a bit busier, but still not to the extent that it was before the pandemic,” said Miriam Crispe ’21.

New York City is showing signs of a slow economic recovery, and the gradual increase in tourism since March 2020 to today is promising. Reporter Patrick McGeenan, at The New York Times, believes that the city will not return to its pre-pandemic glory until 2025, and given that popular activities such as Broadway, the Metropolitan Opera, many museums, and indoor dining are still unavailable, that New York City will see far fewer visitors overall in 2020 in comparison to 2019. However, with the Pfizer Coronavirus vaccine currently in distribution and the Moderna Coronavirus vaccine soon to be approved, many look to 2021 with the hope that it will compensate for the lackluster 2020 that the world has experienced. May the end of this holiday season mark the beginning of a new year of hope!
Anna Buhler ’21, a native New Yorker, said, “Sometimes, I cycle to Central Park and pass a lot of places that are usually crowded with tourists; now, due to the Coronavirus pandemic, they aren’t nearly as full as normal.”