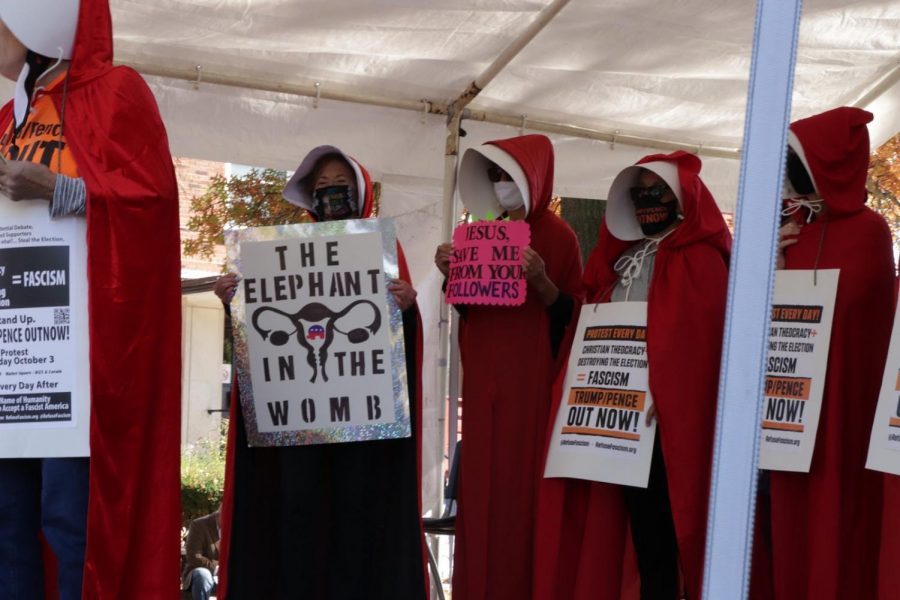 Demonstrators in Cleveland, Ohio, dress as Handmaids from Margret Atwood’s dystopian novel 'The Handmaid’s Tale.' The clothing from the novel became a symbol of the opposition to Justice Barrett after it was claimed that the patriarchal society of the novel was based on the Catholic organization People of Praise, to which Barrett belonged. This claim has since been repudiated, but the symbolism has remained.

With Amy Coney Barrett’s confirmation to the Supreme Court, many are speculating as to how Barrett’s addition may change the court’s future. Some see the change as cementing Associate Justice Clarence Thomas’ place as the court’s new ideological leader.

Even if Chief Justice John Roberts sides with the liberals in future cases, as he has in the past on notable occasions, it will still leave five conservative votes on the court. This would leave Thomas, the court’s second highest ranking member behind Roberts, the role of assigning the majority opinions to various Justices.

Democrats fear that the future of the Affordable Care Act and abortion rights, among other things, may now be at risk. “Republicans finally realized that the Affordable Care Act is too popular to repeal in Congress, so now they are trying to bypass the will of the voters and have the Supreme Court do their dirty work,” said Senator and Vice President-Elect Kamala Harris (D-CA) in her opening statement during Barrett’s confirmation hearing.

Republicans, on the other hand, see a welcome return to the originalist views of Barrett’s mentor, Justice Antonin Scalia. “It was the content of Justice Scalia’s reasoning that shaped me. His judicial philosophy was straightforward: a judge must apply the law as written, not as the judge wishes it were,” said Justice Barrett in her opening statement.

The now even-seated court has been in session since October 5th, 2020 and one opinion by Thomas and Justice Samuel Alito has been interpreted by some as foreshadowing changes that Justice Barrett might bring to the court.

The court refused to hear the case of Kim Davis, the county clerk of Rowan County, Kentucky who refused to issue marriage licenses to same-sex couples, despite the court’s decision in Obergefell v. Hodges which stated that same-sex couples had a right to marriage.

Thomas wrote an opinion respecting the refusal to hear the case, but at the same time questioning the decision in Obergefell. Thomas begins, “in Obergefell v. Hodges…the Court read a right to same-sex marriage into the Fourteenth Amendment, even though that right is found nowhere in the text.” He goes on to say that the decision threatens the “religious liberty of the many Americans who believe that marriage is a sacred institution between one man and one woman.”

“This petition provides a stark reminder of the consequences of Obergefell,” Thomas continues, “by choosing to privilege a novel constitutional right over the religious liberty interests explicitly protected in the First Amendment, and by doing so undemocratically, the Court has created a problem that only it can fix.”

Thomas seems to suggest that the court should consider taking a case related to Obergefell and religious liberty, and that some sort of reversal or weakening of Obergefell would be the desired outcome of that endeavor.

Justice Gorsuch, another Trump appointee, made headlines in June when he wrote the majority opinion in Bostock v. Clayton County. The court held in Bostock that Title VII of the Civil Rights Act of 1964 protects employees not only from discrimination on the basis of sex, but also on the basis of sexual orientation or gender identity.

Chief Justice John Roberts joined Gorsuch on that opinion, as did the four liberal members of the Court, including the late Justice Ginsburg. While the new conservative majority can afford to lose one swing vote (a role that the Chief Justice seems increasingly to be playing) in a particular case, they cannot afford to lose two. So perhaps a rebuke of Obergefell will not be handed down any time soon.

Regardless, the addition of Justice Barrett has substantially altered the makeup of the court. Chief Justice Roberts could now be seen as a swing vote on many issues, with Clarence Thomas leading the conservative majority that now sits on the bench.