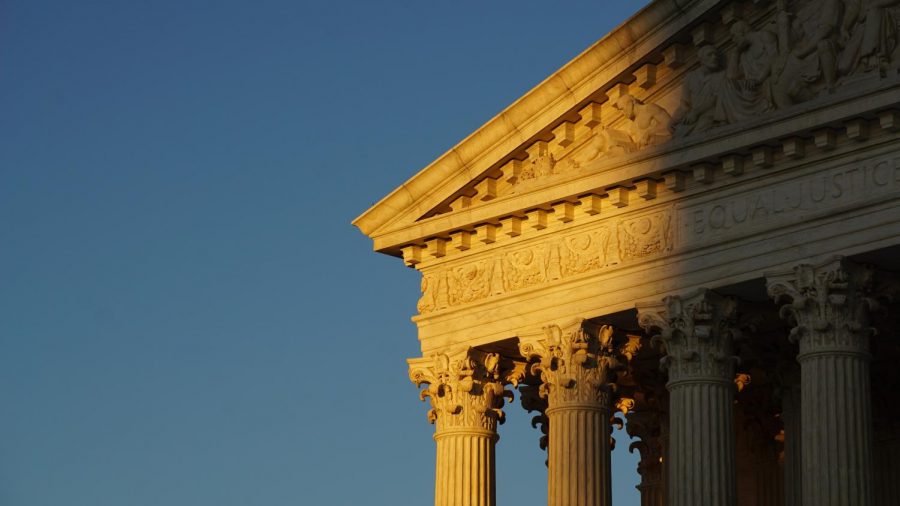 The front façade of the Supreme Court of the United States in Washington, DC.

On October 26th, 2020, conservative judge Amy Coney Barrett was confirmed to the Supreme Court by the Senate in a 52-48 vote.  This came amidst many calls from Democratic members of Congress to wait until after the election to make a nomination.

Barrett has a strong conservative record, and she has expressed far right views on topics like healthcare and gun control. She is also a devout Catholic with ties to a controversial faith group called ‘The People of Praise,’ who have been described as “Conservative, authoritarian, hierarchical and patriarchal” in an article published by The Guardian shortly after her nomination.

However, the main controversy surrounding Barrett does not come from her political standpoints, but from the timing and nature of her appointment. President Trump announced his choice to replace Justice Ruth Bader Ginsburg just six days after her death and after millions had already voted in the 2020 presidential election.

Ginsburg was a political juggernaut, and her Supreme Court decisions had lasting effects on everything from women’s rights to gun control.  Ginsburg spent thirteen years as a U.S. Court of Appeals Judge before serving on the Supreme Court for another thirteen years. Barrett on the other hand, had only served as a judge for three years before joining the Supreme Court as a Justice.  This apparent lack of experience is another reason why many opposed Barrett’s confirmation.

Barrett’s conservative views on many issues are another point of concern for her critics, and some of her past decisions indicate that she believes that the landmark judicial decision Roe v. Wade was wrongly decided.  Barrett has also criticized the 2012 decision to uphold the Affordable Care Act, prompting many senators to question her about healthcare.

President Trump’s decision to nominate Barrett sparked outrage on the left, with many prominent Democrats arguing that it was best to be respectful to the American people and their wishes to wait until after the election to nominate a Supreme Court Justice.

Many who oppose Barrett’s confirmation to the Supreme Court refer to the nomination of Merrick Garland in 2016. When then president Obama brought Garland before a Republican controlled Senate, they blocked his appointment on the grounds that putting a new Justice on the bench during an election year did not give the American people a say.

In 2020 however, the GOP has changed its tune. The party is now neglecting to follow the precedent that they set when they opposed Garland’s nomination in 2016. During the first presidential debate, President Trump said, “We won the election. Elections have consequences.  We have the Senate, we have the White House, and we have a phenomenal nominee.”

The justification that the president used is a common one, but many of the senators who blocked Garland in 2016 have simply neglected to explain their change of heart on the matter.  Among those is Lindsey Graham of South Carolina, who infamously said that Democrats could “use his words against” him if there was ever a Republican president with a Supreme Court vacancy in an election year.

None of this seems to be halting Republicans in the Senate who after three days of questioning, recommended Barrett for confirmation to the full Senate. Both the Judiciary Committee and the full Senate have Republican majorities, so Democrats who oppose Barrett are fighting an uphill battle.

The concerns about Barrett are exacerbated by the overwhelming early voter turnout in the 2020 election, and many have cited it as a reason that the nomination should not have been made.  Zoe Alexander 23’ echoed this sentiment by saying that “the judicial branch is the one that Americans as individuals have the least control over, and feel that it is important that the country today have a say, not the country two or even four years ago.”

This has been explained away by Republican supporters of the process who say that the legality of Barrett’s nomination trumps any argument against it.  They have also ignored concerns about Barrett’s record or level of experience.

Despite opposition, the GOP prevailed, as Barrett was confirmed to the Supreme Court by an exclusively Republican vote in the Senate, and she was subsequently sworn-in on October 26th, 2020.
In 2020 however, the GOP has changed its tune. The party is now neglecting to follow the precedent that they set when they opposed Garland’s nomination in 2016.