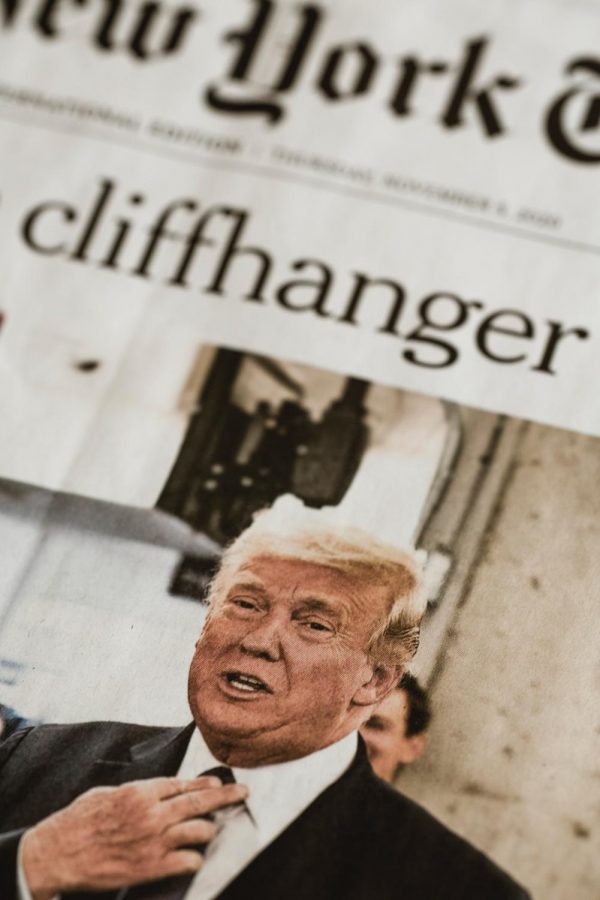 'The New York Times' from Thursday, November 5th, 2020, after the election report. The November 3rd, 2020 election hinged on President Trump's poor Coronavirus response, which help to propel President Elect Joe Biden to victory. It did not help that President Trump himself and numerous members of his inner circle contracted COVID-19.

After President Trump’s COVID-19 diagnosis, he was treated with a promising antibody cocktail treatment from the Biotechnology company Regeneron, along with a slew of other drugs. Trump left Walter Reed Military Medical Center on October 5, 2020 to receive the rest of his treatment at the White House.

Since leaving the hospital, President Trump has highly lauded the Regeneron treatment, citing it as the biggest factor towards his recovery, as seen from a video update the White House released on October 7, 2020. He additionally stated that he would work to make the treatment public to all Americans.

The Regeneron treatment is a cocktail of monoclonal antibodies composed of synthetically produced proteins that the immune system creates. According to a Regeneron study with 275 infected volunteers, the treatment has shown strong promise in reducing viral load and recovery time. However, monoclonal antibodies are difficult and expensive to manufacture, which has raised many questions and concerns about Trump’s claims.

“Trump is trying to fix the political damage that happened after he failed to protect 240,000 Americans from COVID-19. His claim that the treatment is obtainable for everyone cannot be guaranteed to all people,” said Vicky Wang ’24.

With the tight supply situation in mind, Dr. George Yancopoulos ’76, Regeneron’s co-founder and President, said the company is preparing for an influx of requests for the treatment despite the antibody cocktail not being FDA approved.

President Trump was able to take the treatment without FDA approval because companies can distribute experimental treatments under “compassionate use,” where severely ill patients can take unapproved, available drugs if there are no other treatments available.

In a recent interview, Regeneron chief executive Dr. Leonard S. Schleifer said that Trump’s use of their treatment was FDA cleared. Dr. Schleifer had casually known Trump for several years as a member of his golf club, which has led to some scrutiny from the public.

What also had led to this scrutiny is how Trump’s treatment was developed in the first place. Regeneron had developed the monoclonal antibody cocktail through embryonic kidney tissue. The Trump administration suspended funding for fetal stem cell research back in 2019.

“It’s kind of ironic that his life is being saved because of something that his administration disapproves of,” said Linda Chen ’21. As the Trump administration is publicly pro-life, the fact Trump’s treatment was derived from the stem cells of embryonic tissue is a point of controversy.

The Trump administration argues the treatment is not contradictory , as the suspension “specifically excluded” fetal cell lines from before June 2019.

Amidst all of this controversy surrounding Trump taking the treatment, Regeneron’s public profile has skyrocketed, with company officials selling over one million dollars worth of stock after President Trump praised the treatment.

“The president’s case is a case of one, and that’s what we call a case report,” Schleifer said during an interview with “Face the Nation” on October 11th, 2020.

In order to test the antibody cocktail, Regeneron will be conducting large, randomized clinical trials, remaining transparent about prioritizing these tests throughout its increasing publicity.

Regeneron said doses of the antibody cocktail would be available to around 50,000 patients. Meanwhile, the Federal government has awarded Regeneron with more than $500 million in funding, and the treatment is now in its final stages of testing.

The role that Regeneron is to play going forward after the 2020 presidential election is to be further explored. President-elect Joe Biden meanwhile announced a transition COVID-19 advisory board. With Biden as the President-elect, there is a lot to look for in the months ahead in dealing with the Coronavirus pandemic.
“The president’s case is a case of one, and that’s what we call a case report,” Schleifer said during an interview with “Face the Nation” on October 11th, 2020.