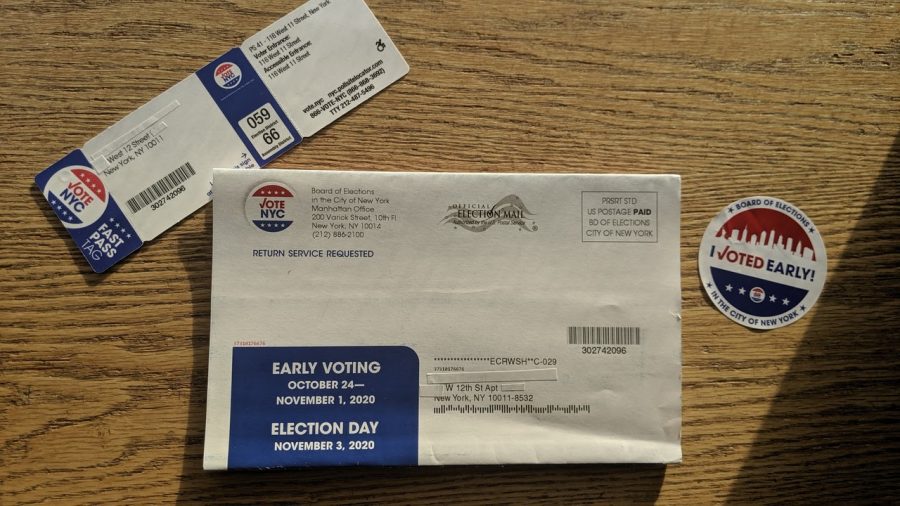 Here is a New York City Board of Elections letter with information on voting early in-person and on voting on Election Day.

On November 7, 2000, George W. Bush was elected as the 43rd president of the United States of America. This was despite Al Gore having won the popular vote by half a percentage point, and Bush having taken Florida, the tipping point of the election, by a shockingly narrow margin of just 537 votes. In a country of 300 million people, the election was decided by less than one thousand.

Typically, an election like 2020 would not get so much attention. Biden is leading in the polls by substantially more than Hillary Clinton did back in 2016. In Pennsylvania, a key battleground state, Trump trails Biden by over five points.

But this is not a normal election. This is happening in the midst of a pandemic that has ravaged the country, devastating millions and killing thousands. As a result, this election is fundamentally changing the function of American democracy.

Prior to 2020, only five states had conducted elections entirely by mail: Colorado, Hawaii, Utah, Oregon, and Washington. Now, the rest of the country has followed suit, allowing citizens to vote via an absentee ballot.

In New York, the deadline to request an absentee ballot online passed on October 27, 2020. However, you can still request one in-person up until November 2nd, the day before the election.

This brings up another question: how long will it take to receive the results of the election? For instance, in the New York primary, the vast majority of votes, especially from those who voted in-person, were counted in just a couple of hours. Yet, because of mail voting, it took ten days to tally the remaining ballots, the longest of any state primary elections.

So how can you make sure your absentee ballot is not invalidated? Here’s what we know:

The most common reason for a ballot to be invalidated in 2016 was because of an inconsistent signature when compared to the ones from voter registrations, ballot applications, and other documents.

The next most common reason was for a ballot to arrive late, and then for ballots to have no signature at all. While ballots must be postmarked by November 3rd and received by November 10th, 2o2o, if they arrive by November 4th, they will still be counted with or without a postmark. If you want to know the status of your absentee ballot, check here.

There are also some challenges with absentee voting beyond the mistakes voters can make. The claims that President Trump has made that mail-in voting is “ripe with fraud” have no evidence to back them up. However, there are still some issues surrounding it, particularly in New York. Take Brooklyn as an example; a printing error sent voters 100,000 defective absentee ballots. Election officials have done their best to fix the mistake, though it goes to show that mail-in voting in New York is vulnerable to errors.

However, voting on Election Day can be risky. From long lines, bad weather, and, of course, the Coronavirus, there are a plethora of factors that can change your decision calculus as to whether you want to vote in person.

The final form of voting is voting early in person. New York offers early voting up until November 1st, 2020. Check here for schedules and locations.

Nationally, tens of millions of people have already voted early in person. It makes your ability to vote less vulnerable to unpredictable factors that affect voting on Election Day. You should still be aware of long lines when voting early, but less than on Election Day.