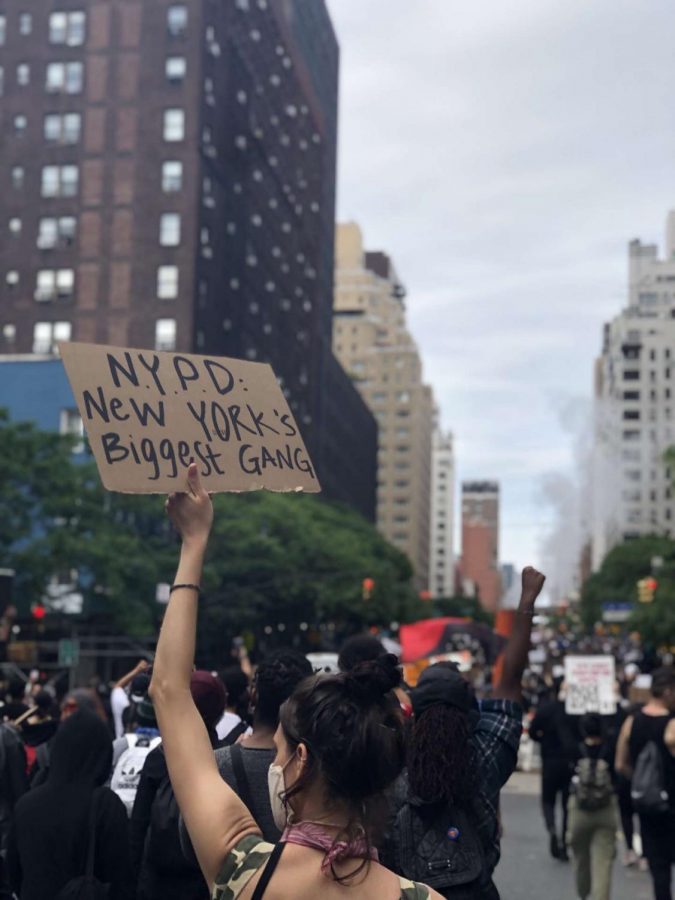 People are protesting all over New York City in response to the death of George Floyd.

George Floyd, a 46-year-old black man, passed away on May 25, 2020 while under arrest for alleged forgery by four police officers who claimed that Floyd physically resisted his arrest. Video footage of the scene  from bystanders of the incident went viral, showing that Floyd was unarmed and non-violent, exhibiting no resistance to his arrest. He was handcuffed,  and pinned to the ground by a white male officer, Derek Chauvin. Chauvin held Floyd with his head on the cement sidewalk with his knee pressing into Floyd’s neck. Floyd was pinned for approximately nine minutes despite his continuous pleas of “I can’t breathe.” Eventually, Floyd became unresponsive which drew panic among the bystanders, but Chauvin kept his knee pressed into Floyd’s neck, showing no sign of sympathy or alarm.

The F.B.I. responded immediately with a civil rights investigation and the termination of Chauvin and his colleagues that were present at the site of arrest, Thomas Lane, Tou Thao, and J. Alexander Kueng. The death of Floyd was brought to the attention of millions of people who showed their support of the Floyd family and mourned his death through social media, by posting petition links and ways to donate to the Floyd family. For three consecutive weeks, protests that began in Floyd’s hometown of Minneapolis have broken out in every city across the United States, demanding an end to police brutality and justice for Floyd.

“Chauvin had no reason to keep his knee on Floyd’s neck after he was handcuffed. No one should be subjected to this type of treatment, especially when the crime in question was a fraudulent $20 bill. The fact that there were three other officers watching this take place infuriates me even more,” said Hanil Chung ’20.

Chauvin was initially charged with third degree murder, or murder without intent, a few days after  the Minneapolis riots. The mayor of Minneapolis, Jacob Frey, implemented an 8 p.m. curfew for its residents as a result of the aftermath of the riots, with the National Guard patrolling the streets.

As Floyd’s case gathers more media coverage across the United States, more and more cities show their support for the Black Lives Matter movement through protests and donations, reigniting the movement. Streets have grown more violent in response to the increase in police brutality, and stores throughout New York City have been looted after riots. As a result, Mayor Bill DeBlasio followed in Frey’s footsteps by implementing an 8 p.m. curfew in early June (now, it has been lifted).

After a week of protests, the other three officers present during Floyd’s arrest were charged with murder, and Chauvin is now facing charges for second degree murder.