Asian Giant Hornets Are ‘Buzzy’ in the United States 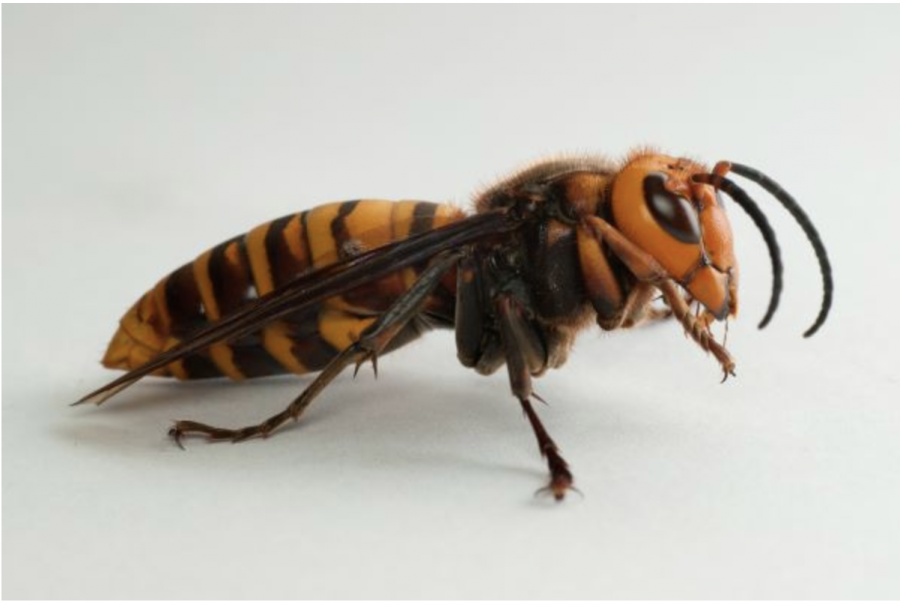 Here is a up close photograph of the male Japanese giant hornet, Vespa mandarinia japonica.

News is buzzing around concerning the deadly and venomous Asian giant hornets. The giant hornets, indigenous to Asia, have mysteriously traveled across the vast Pacific Ocean to North America. As of May 2020, there have only been two sightings within the United States, both of which were in Washington. The hornets were also seen in British Columbia and Vancouver Island. While many had hoped that they were runaways from the same colony, genetic testing revealed that they were not related, suggesting that multiple colonies are taking root in North America. After The New York Times published an article on their findings, panic erupted on social media as thousands flooded to Twitter, all using the hashtag #murderhornets.

The pests have also recently been seen in more of the Pacific Northwest territory. Since late 2019, there have been two more sightings of the hornets in Custer, Washington and Langley, British Columbia. The researchers recognize that the insects are not staying within the areas in which they were previously seen. American entomologists and Canadian field workers now realize that traps must be placed to cover a larger area, as the hornets continue to expand their distribution area. As of now, the most feasible explanation for how the Asian giant hornets arrived in the western hemisphere was that they came in packages and shipments from Asia.

Asian giant hornets are native to the tropical atmosphere of eastern Asia, including Japan, Sri Lanka, China, and India. In Japan, the hornets kill up to 50 people every year. The Asian giant hornets have a unique appearance; they have beady almond-shaped eyes, yellow and black stripes that wrap around the abdomen, and a yellow-orange head. Significantly larger than other wasps and hornets, a typical worker hornet is around 1.4 to 1.6 inches. A queen hornet can grow larger than two inches, making it the largest hornet in the world.

Unlike honey bees, which die after stinging just once, hornet stingers can puncture repeatedly. Their stingers are around 0.25 inches long and capable of puncturing thick clothing. It has been said that their stings feel similar to hot metal stabbing into the skin. These “murder hornets” were titled as such through their potently dangerous stinger, a stinger so deadly that in extreme cases, it could kill a person with enough stings, regardless of whether or not one is allergic. They can also cause multiple organ failure, kidney failure, skin hemorrhages, and necrosis (the death of cells in an organ or tissue).

The hornets only prey on honey bees, using their mandibles to decapitate the bees and destroy their hives. And the possible permanent establishment of these hornets in the U.S. is a risk towards the already stressed local bee population. Honeybees are essential for pollination during the spring season, meaning that major environments rely on them. It is not solely animals that depend on the plants pollinated by the honeybees. A third of the food crops consumed by humans are mainly pollinated by bees, also. The targeting of honeybees by these hornets are not only detrimental to plant and animal life but also to daily human consumption.

However, these deadly pests should not be a cause for nation-wide concern. “[The Asian giant hornets] do not currently pose a threat, and they are unlikely at this time to migrate to other states,” said Karla Sap, the Public Engagement Specialist of the Washington State Department of Agriculture. “If they were to become permanently established here, then there would be a concern of them moving beyond Washington.” Asian giant hornets only target honeybees, meaning that unless provoked, humans will not be in harm’s way. The hornets only become aggressive when they feel that their colony is being disrupted and is in need of defense.

The Washington State Department of Agriculture is handling the situation and has developed a strategic plan for how to capture the hornets. “We are trapping for them in an attempt to locate them,” said Sap.  “Additionally, we have lots of volunteer trappers in the area who are also trapping and monitoring for them. If we find any, we will increase trapping in the area where they are detected with the plan to locate the colony and eradicate it.” The department has also promoted citizens of Washington State to assist in trapping. On their official website, they tell those interested in helping to use bottles as traps and prepare sweet substances as bait to lure the hornets.

Although the complexity of the circumstances is escalating, it is important that the country stay calm. It is essential that the public remains informed about the issue so that people do not exterminate bees and wasps necessary to the ecosystem, out of misplaced fear. Fake warning signs about the hornets were placed along trails in Washington, causing a frenzy among citizens. The prevention of the spread of false information is crucial to protect the killing of bees that are mistaken for the hornets. We must remain informed as new information comes in.

Click HERE for a useful guide on how to properly deal with wasps, hornets, and bees if they build nests in or around your homes. The guide also has some actionable tips that you can use at home or in the workplace in order to avoid this problem in the first place.