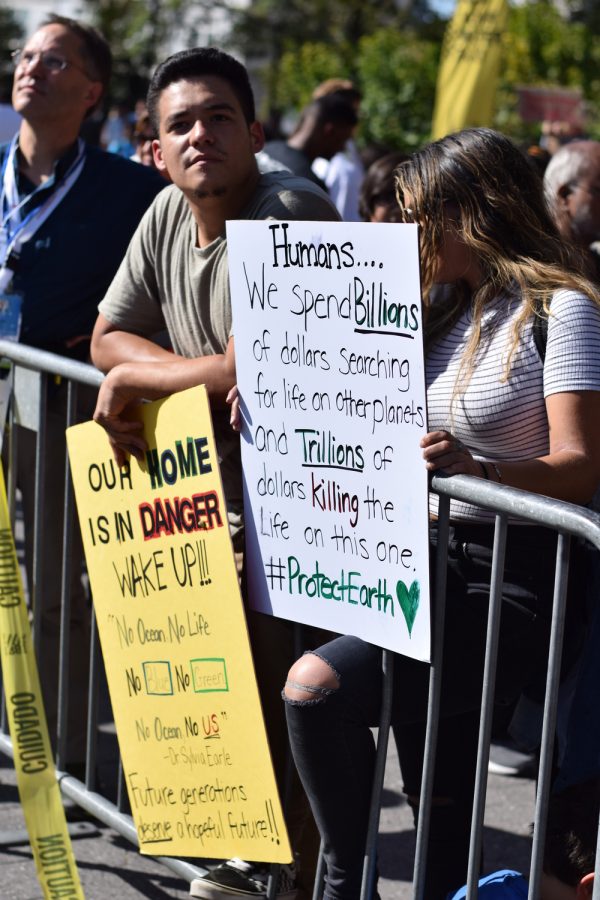 During the largest climate strike in history on September 20, 2019, students gathered to rally government officials to take urgent action on climate change. Global warming has had a significant impact upon Australia’s Great Coral Reef.

As the world is currently faced with the global Coronavirus pandemic, a devastating event also occurred below sea level. The Great Barrier Reef, located in Queensland, Australia, faced its third mass bleaching in five years. In recent years, the Reef has suffered tremendous damage due to global warming, and it will face grave consequences in the future if immediate action is not taken. The Reef supports one of the most biodiverse ecosystems on the planet, and it is home to thousands of marine animals that depend on it for survival.

Contrary to popular belief, the Great Barrier Reef is not entirely dead. Coral reefs undergo bleaching as a result of temperature changes and can recover if conditions return to normal. During this process, corals expel symbiotic algae, called zooxanthellae, which the corals depend on for photosynthesis and its vibrant colors. Because corals are dependent on zooxanthellae for survival, corals die when the zooxanthellae are absent for long periods of time. Coral bleaching has left significant parts of the Great Barrier Reef completely white, which also led to a decline in biodiversity. Studies have shown that fish populations significantly decrease after bleaching events, which disturbs the ecosystem.

To examine the effects of rising temperatures on coral reefs, scientists carry out aerial surveys and conduct bleaching impact assessment surveys. In this year’s collected data, the Great Barrier Reef Marine Park Authority found that the Reef was ravaged along the coastline, making it the most widespread bleaching event, and the areas south of the Reef were bleached for the first time. Fortunately, the coral reefs in the major tourist areas remained mostly unaffected; they faced negligible to moderate bleaching. This recent bleaching event was the second most devastating after 2016, when over thirty percent of the corals were completely dead after the severe bleaching.

Since the first recorded bleaching of the Great Barrier Reef in 1998, scientists have been closely monitoring the alarming rates at which corals are bleaching. The biggest contributor to coral bleaching is global warming caused by carbon pollution, and this has become more apparent over the years. “Climate change in itself is an important issue to be aware of in and of itself, but the effect that it is having on the planet’s oceans and marine ecosystems is especially important to consider because the oceans make up over 70 percent of the Earth’s surface,” said Haley Sim ’20. “Social media provides a great platform for talking about coral bleaching, but reposting Instagram posts to your story and retweeting can only do so much. Reading current events articles about environmental issues and books about marine ecosystems and conservation can be great ways to become more knowledgeable about the issue of coral bleaching. I recommend reading The World is Blue by Dr. Sylvia Earle, a great book on this subject.”

As a response to these coral bleaching events, the Australian government has been implementing plans to help the Great Barrier Reef to recover from bleaching, including the Reef 2050 Long-Term Sustainability Plan and the Reef Restoration and Adaptation Program. The Australian Institute of Marine Science has been collecting data to understand the cumulative impacts of various events and the recovery processes of reefs and corals in between the bleaching events. Additionally, scientists have also been experimenting with “cloud brightening” in efforts to protect the Great Barrier Reef from global warming.