The Science Survey • May 10, 2020 • https://thesciencesurvey.com/news/2020/05/10/evacuate-the-city-families-moving-to-secondary-homes-amidst-the-coronavirus-pandemic/

Evacuate the City! Families Moving to Secondary Homes Amidst the Coronavirus Pandemic 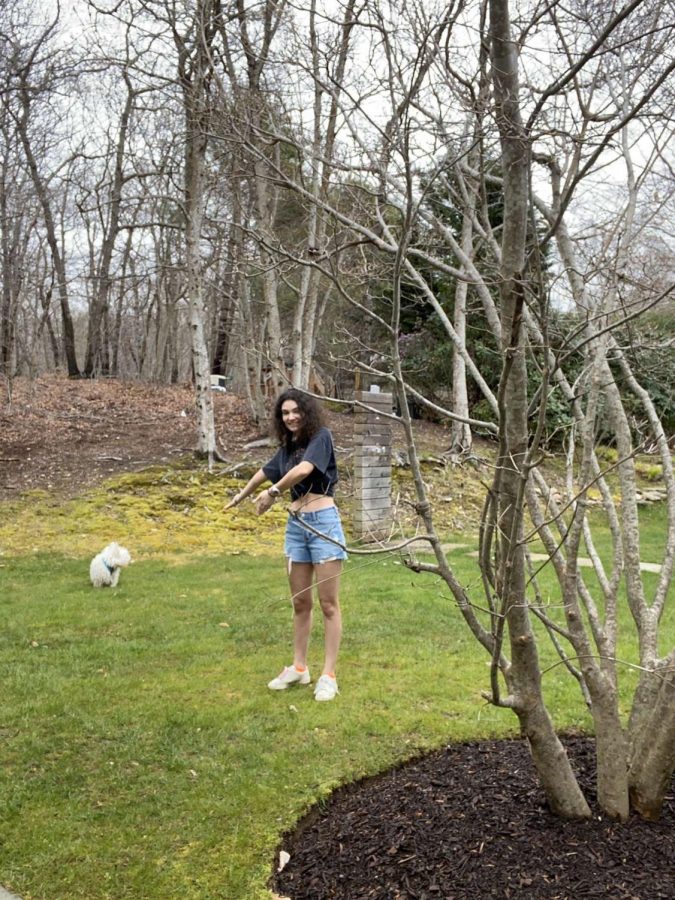 Isabel Bernstein '20 plays with her dog in their yard on Long Island.

Understanding the severity of the virus in New York, many New Yorkers have fled from the city to their secondary/vacation homes.  Kiele ’23 and Elena ’20 Morgan moved to their grandmother’s house on Long Island almost immediately after the virus began threatening New York City.  “We decided to come to my grandma’s house because with our family of five, we knew that it would be better to be stuck inside a spacious suburbia house rather than a small tight new York City apartment for a few months,” said Kiele Morgan.

Isabel Bernstein ’20 also moved to her house on Long Island. “My family and I have a backyard here, so we wanted to be able to get fresh air alone without potentially being a threat to others or catching something from other people,” said Bernstein.  Decreasing the density on New York City streets helps to  decrease person to person contact, reducing accidental transmission of the virus.  Additionally, having the ability to go out without worrying about being surrounded by people can help to ease the stress and anxiety that many people are feeling right now.  “We feel like moving has  improved our situation overall, because we don’t have to stress as much,” said Bernstein.

However, many city evacuees have received a lot of criticism from the locals in those communities. Martha’s Vineyard locals have gone out of their way to ask the nonpermanent residents not to come because the medical infrastructure of the Vineyard cannot handle an influx of potential patients.  According to NBC News, the Vineyard has only seven ventilators, 25 beds, and a population of 25,000. This comes out to one bed for every 1,000 residents. Commenting on the frustration locals have, Bernstein said, “I think it’s important for local residents to know that most (if not all) people moving out here are here to isolate, so we won’t be spreading the virus!”

In other places around the New York region, local representatives have taken independent action. The Regional Office of Sustainable Tourism in the Adirondacks has asked visitors to stay away, the governor of Florida mandated a 14 day quarantine for people coming from New York, and supervisors from Long Island have also been urging people not to come.

The decision was not taken lightly for Amanda Maeglin ’20, and a lot of thought was put into making the decision for her family to move out to their home on Long Island. “I know that there are people who haven’t been outside in weeks, and I know that it is such a privilege for us to be able to uproot and move out here,” said Maeglin.  However she feels that this has ultimately been the right choice for her family. “I also think that we are safer and happier because we moved,” she said.  Leaving for a secondary home is not an option that many New Yorkers have.  So many New Yorkers have lost their jobs and do not have the resources or ability to be able to change locations in this way.

“I do think the move made a difference; I think that we are all much happier here, and while we all miss the city a lot, we know that coming here was the right decision. I think that it made all the difference for my grandma who has had the joy of eating my mom’s great dinners every night, and having someone to get groceries and her medicines for her,” said Kiele Morgan.

“I think it’s important for local residents to know that most (if not all) people moving out here are here to isolate, so we won’t be spreading the virus,” said Isabel Bernstein ’20.