Battling Coronavirus in the Lower East Side

Residents of the Lower East Side come together in solidarity during the COVID-19 pandemic. 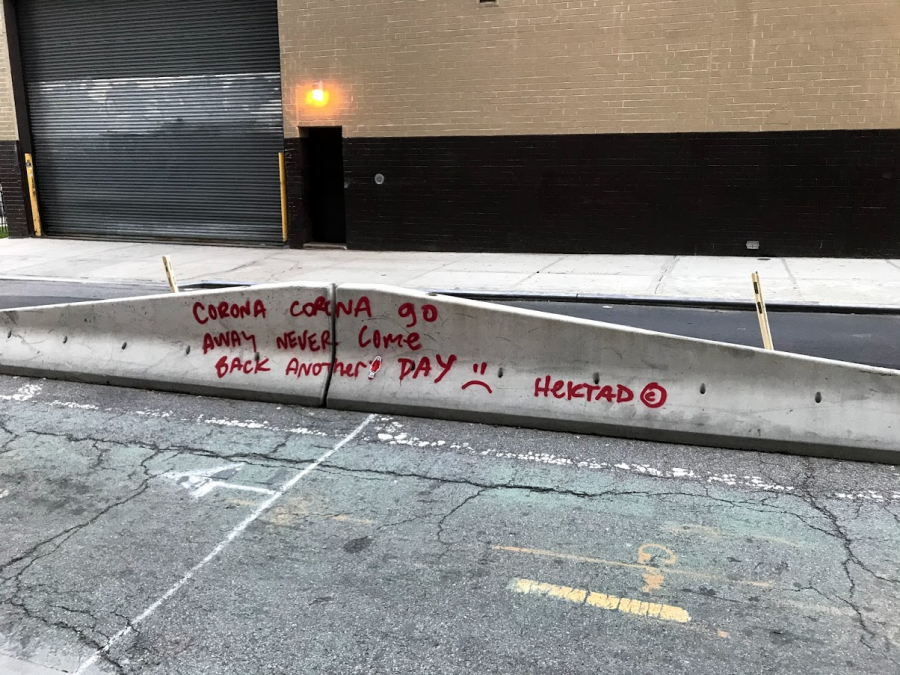 A rise in graffiti can be seen on the Lower East Side as taggers are less likely to get caught given that streets are mostly deserted due to the quarantine orders in effect due to CONVID-19.

From balcony-singers in Italy to volunteers around the world who help out on the front lines, people of all nationalities have come together during this troubled time of the Coronavirus pandemic in order to boost the morale of their neighbors.

New York City’s Lower East Side, one of Manhattan’s most contagious hotspots, has proven to be no different. With small local restaurants providing free food for first responders and numerous sites supporting the homeless, residents of the Lower East Side have been helping out in any way that they can. While most locals are unable to help directly on the front lines, they have been making their support known at 7 p.m. every day for the past few weeks.

As the sun descends, the Lower East Side comes alive for a long five minutes. People appear on balconies throughout the neighborhood, and scattered faces present themselves through windows, with attendance growing as the pandemic passes through New York City. A thunderous mixture of banging pots, clapping hands, and air horns echo through the streets, followed by Frank Sinatra’s famous song, “New York, New York.” The atmosphere is electric, and during these short five minutes, the Lower East Side sounds as it should. Banging pots are the sounds of cars passing by, clapping hands are the sounds of the pickup games on the basketball courts, and air horn blasts are the sounds of everyday conversation in the streets.

But by 7:15 p.m., the silence that now rules the city returns. The only noises to be heard are birds chirping, dogs barking, and the few cars that pass by on mostly deserted streets. The flags that stand nearby are flown at half-staff — an order issued by Governor Cuomo to honor the victims of the coronavirus pandemic — and as darkness falls, the neighborhood drifts back to sleep.

This cycle has become the unfortunate reality that many New Yorkers face across the five boroughs, but luckily it is not all bleak. Isadora Polish ’21 recently shared a story of how she made a new friend by supporting the essential workers. “I was leaning out of a window and clapping for the essential workers, when I heard someone nearby whoop. Since I was desperate for non-familial human interaction, I whooped back in the same tone, but at a higher pitch. She whooped back at an even higher pitch, then I did the same. She pretty quickly reached a pitch that I couldn’t match, so I yelled “I CAN’T GO THAT HIGH,” and she laughed and yelled back, “HAVE A GOOD DAY!” to which I replied, “YOU TOO.”

The age of COVID-19 scares most people, but with people of all ages coming together, social distancing becomes a little more bearable.
As the sun descends, the Lower East Side comes alive for a long five minutes.