The Protests at Beacon High School 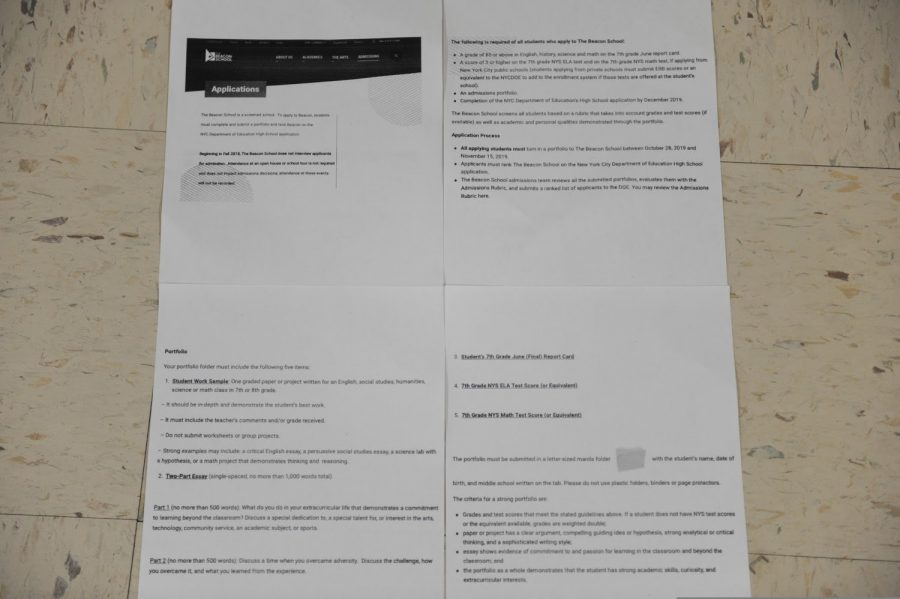 Hundreds of Beacon High School students walked out on December 2nd, 2019 to protest the school’s highly selective admissions process due to the schools’ lack of racial diversity.

“End Jim Crow,” and “Education is a right, not just for the rich and white,” were the chants of hundreds of students from Beacon High School who walked out on December 2nd, 2019. Just two weeks later, on December 16th, 2019, many of those same students, dressed in black with their mouths covered with tape, boycotted their classes to participate in a student-run sit-in. Both of these events were held to protest their prestigious school’s admissions process, as well as its handling of racial discrimination.

The highly selective admissions procedure at Beacon High School requires potential applicants to maintain a minimum grade of 85% in all 7th grade core classes, earn a score of three or higher on both 7th grade New York State Standardized Tests, and create a portfolio that includes a written sample and a two-part, 1,000 word essay assigned by the school. This process screens out thousands of candidates; a mere 350 students each year enroll.

The student protesters have specifically targeted this system because they believe that it has not promoted enough racial integration in their school. According to the “Student Diversity” section of the U.S. News profile of Beacon High School, 52% of the student body is Caucasian, while only 34% of students are African-American or Latinx. The issue is these numbers don’t represent the racial background of all NYC Public School students. While Mayor Bill de Blasio and Schools Chancellor Richard A. Carranza have promised to desegregate New York City Public schools, one of the most segregated school districts in the country, neither have passed any significant legislation or established policies to combat this issue.

“I do get the issue with increasing diversity, because it is something that seems to have had a positive impact on students. With a more diverse school, you get more diverse opinions that ultimately help to build the school’s reputation and the students’ experiences. However, one of Beacon High School’s prime focuses shouldn’t be diversity in general, because, then again, the fact that these schools like that are selective is because they want top students; they are not directly looking for a quota on the type of students that they want,” said Chris Vilorio ‘21.

The catalyst for the sit-in was an incident involving a Caucasian, senior girl and her guidance counselors. According to a statement the girl gave to The New York Post, she expressed her disappointment that she was waitlisted at a top college, despite her academic success, while other students got accepted into prestigious universities, “because they might be athletes, afforded financial scholarships, or get seats based on affirmative action programs, as opposed to academic achievement as the first and only criteria.” When the student who eavesdropped on the conversation entered the room and berated the anonymous student and her guidance counselors, it marked the beginning of the school-wide outrage at the comment. As a result, the girl left the school.

Instead of another walk-out or, as a Beacon teacher suggested, a boycott of the school, on Monday, January 16th, 2020, Beacon’s United Unions, an alliance of six student groups that focus on racial or religious identification, opted for a sit-in and teach-in. That day, many Beacon students came dressed in black as a symbol of solidarity. The school offered a choice between attending classes or going to student-led seminars about racism and discrimination. According to an e-mail sent to the students the night before the sit-in, the Principal of the school, Ruth Lacey, was, “moved by the passion” of the people who spoke in the cafeteria that Friday. She offered full support for the movement, but stated that anyone who didn’t attend their official classes would be marked absent.

Later that day, Beacon’s United Nations held a press conference, where they explained their demands to the public. The news organization The Gothamist, published the student group’s full social demands. In the document, the students requested the school make a public apology for its previous actions, which has allowed, “racism to fester over the course of years within the student body and within the staff and administration itself.” The activists also desired an investigation of the girl’s college counselors, the diversification of the school’s counselors, and mandatory workshops for students and teachers funded by the PTA to create a safe space for all students.

This past week, an anonymous Beacon High School student who participated in the sit-in noticed that, “there were never more than four students in a class every given period,” and that, “it was amazing to see all of the students rally together to support the cause at hand. The entire day was meticulously organized and had a very professional feel to it.” He also felt that the kids who decided to attend their regularly scheduled classes were, “alienated, because everyone seemed to stare at them in the hallway for being racist — making immediate assumptions because they didn’t go along with the overwhelming number of students.”

This hasn’t been the first time Beacon High School has been in the news for dealing with perceived racism. In 2015, a Caucasian, Jewish Beacon student was pulled out of school by her father due to the bullying that she received for a comment that she made. In a statement to The New York Post, the father said that when his daughter was discussing that year’s terrorist attack in Paris, she mentioned that religious extremism can cause war and terrorism. Afterwards, she was mercilessly bullied and threatened by her classmates, and when her father and she met with the principal, the administration relayed that the girl was ‘too opinionated.’”

At Beacon, students address what they believe to be the long-standing issues of their prestigious school. They call for action through protests and sit-ins, in order to see their school change for the better.
“It was amazing to see all of the students rally together to support the cause at hand. The entire day was meticulously organized and had a very professional feel to it.”