Onto the Streets and Riding the Rails 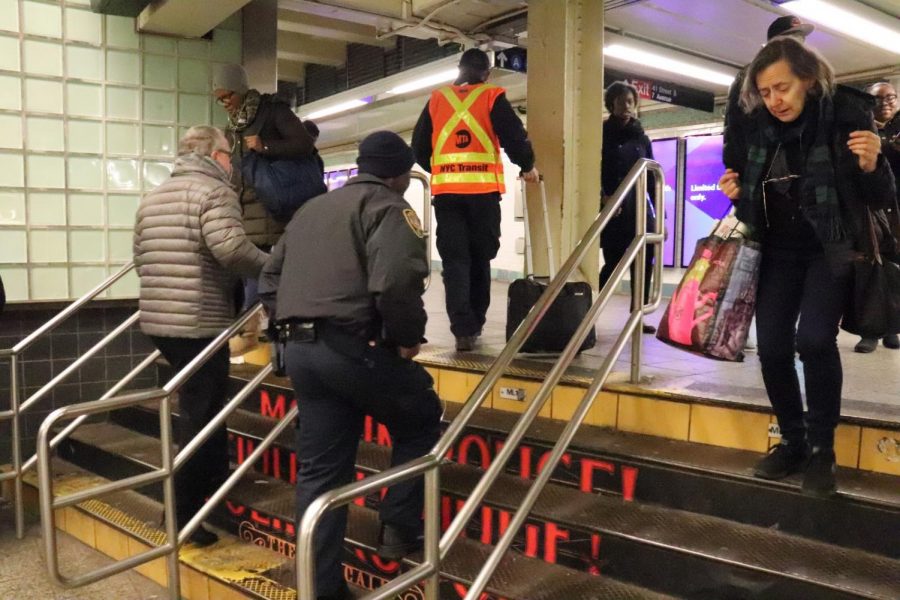 A police officer walks up the steps of the Times Square subway station in accordance with Governor Cuomo’s policy.

One of New Yorkers’ most familiar experiences is walking into a subway car only to see a homeless person begging, muttering, or simply laying across an aisle of seats. If you’ve noticed an increase in the number of these incidents, you aren’t the only one; the number of homeless people camping out in the subway has been on the rise, increasing 20% from the previous year. While many city officials view those who spend their nights riding empty cars as a nuisance and cause of delays, it’s important to understand that their presence highlights a deeper issue of New York City’s homeless crisis and the condition of our current shelter system.

The truth is that modern homelessness is a fairly recent phenomenon. People first became aware of the multitudes living on the street in the late 1970s as a result of the deinstitutionalization of patients in mental hospitals as well as the decline of single-room occupancy units, which had provided affordable housing to many, including the recently-discharged mentally ill. A new divide between the middle and working-class coupled with rising rent meant that many families were pushed out of their homes and onto the cold and unforgiving streets of New York.

While many reforms have been passed over the years to aid the thousands of people facing homelessness, they have proven to be fruitless, accomplishing nothing but exacerbating the problem. According to the organization Coalition for the Homeless, there are currently 62,391 people who sleep in New York City shelters each night; this number is the largest New York has seen since the Great Depression. As high as these numbers are, these statistics do not account for those who sleep on the street and in public spaces which is estimated to be 4% of the overall homeless population in the city.

But if only 4% lives unsheltered, why should we care?

Although 4% may seem statistically insignificant, it represents thousands of people who make their homes on unsafe streets and in crowded, unsanitary subways.

Many politicians have tried to shift the blame onto the homeless for living on the street, but in truth there are numerous policies and regulations that prevent entrance into shelters. For instance, there is one policy known as “sighting” where, in order for a social worker to assign a homeless person to a housing program the social worker must watch a person sleep outside in the same spot multiple times in order to prove that they are homeless. This process has been criticized because people claim that it is demoralizing and because it can take weeks for an outreach worker to formally deem  someone as homeless, making it much harder for many to find housing.

Many organizations that advocate for better solutions to the city’s homeless problem can agree on the inefficiency of the system. “People refuse services like traditional shelters for fairly legitimate and rational reasons, and often have to spend months or even years waiting for services they need, like housing,” said Josh Dean, a representative from the organization Human.nyc.

The issues with the housing system include more than just official city policy. According to a 2018 New York Times article, many homeless people are moved around to multiple different shelters and not told why, creating further instability both mentally and physically.  At a time where addressing the homeless crisis in New York City is more critical than ever, our politicians have not gained much support for their plans to combat this dire issue. Governor Cuomo has been faced with an onslaught of criticism concerning his policy addressing the homeless problem on the subway. “It’s a shame that the governor isn’t doing more to house homeless people across the state, like signing Home Stability Support into law or following through with his commitment to fund and building 20,000 units of supportive housing,” said Dean.

To conclude, as the homeless crisis continues to grow, we must remember that seeing someone sleeping on a train car cannot be labeled as just a quality of life issue. There are legitimate, rational reasons why the city’s homeless do not enter the shelter system. New York’s politicians have shown that our outlook on the problem can change the way we handle it, and if we do not recognize the homeless crisis as a human issue, it will never be able to be fixed.
Although 4% may seem statistically insignificant, it represents thousands of people who make their homes on unsafe streets and in crowded, unsanitary subways.