Does everyone love that chicken from Popeyes? 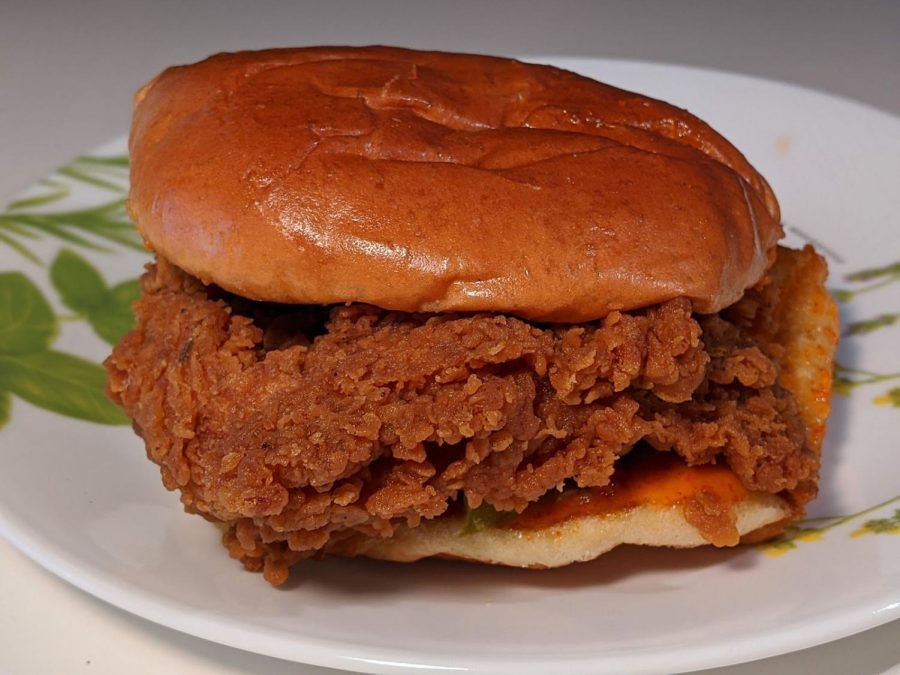 Is the new Popeye's chicken sandwich worth the hype?

Nick Lin ’22 couldn’t wait to try the new Popeyes chicken sandwich. It was all anyone seemed to be talking about. So he waited, and after an hour had passed, he was finally able to get his hands on it.

Unfortunately for him, he didn’t find the sandwich to be all that special. “People were pushing to get [the sandwich] and so I waited. Everything about it was pretty good, but it was not worth waiting an hour for.”

It seemed the rest of America didn’t agree. When Popeyes introduced the new sandwich on August 12th, 2019, the company was not prepared for the response that it received. There were huge lines as word got out, and a social media frenzy about the sandwich grew. Arguments and scuffles broke out. Food critics even debated its tastiness. It sold out in fifteen days.

Having learned their lesson, when all the sandwiches ran out, Popeyes took their time reintroducing it, leaving fans waiting for more than two months. The sandwiches were back on November 3rd, 2020, and Popeyes tried to reassure customers that this time they wouldn’t run out. Still there were some incidents, including an argument that turned fatal outside a Popeyes in Maryland. According to the police, a man was stabbed outside of the establishment after the suspect accused him of skipping the line.

While the Popeyes chicken sandwich craze has lasted through to December, the hype has started to die down. There are no longer long lines of customers for it, and some even argue that it wasn’t that good to begin with. Samuel Mercedes ’21 said, “Popeyes is over-hyped by the community… I feel like they literally took a piece of chicken and put it in between some biscuit, and people freaked out over it.”

It seems that the hype around the sandwich has actually steered people away from the company and towards other fast food chicken sandwiches such as those from Chick-fil-A and McDonalds.

For years, fast food fans mostly agreed that Chick-fil-A’s chicken sandwiches were the best. But word had gotten out that the company supported charities that were anti-LGBTQ, driving many people away from the fast food chain. Some angry customers even began to boycott the brand.

With many people leaving Chick-fil-A, Popeyes saw an advantage in introducing a new highly requested menu item, the chicken sandwich. The sandwich is very simple. It consists of a piece of battered, fried chicken in a bun, with pickles and an optional spicy sauce.  But to fans, the breaded chicken fillets seem thicker, juicier and more flavorful, the brioche bun is a welcome change from the usual sesame buns, and the spicy version has an extra kick.

Lauren Cho ’22 said, “The sandwich tasted really good, and I would definitely get it again.”

But it isn’t surprising why some might say that the sandwich isn’t all that special. Regents Chemistry and Post AP Chemistry teacher, Mr. Mulick, said there have been many similar fads which blew up when they first released, but quickly died down as time went on and stores restocked. “It’s just a sandwich and not very special. It is similar to other fads like the Tickle-Me-Elmo doll.”

Still, Sophia Mah ’22 tried and enjoyed the chicken sandwich. “I am still thinking that the hype over it is ridiculous because it’s just a sandwich,” she said.

“I am still thinking that the hype over it is ridiculous because it’s just a sandwich,” Sophia Mah ’22 said.