Are We Sleeping Enough? 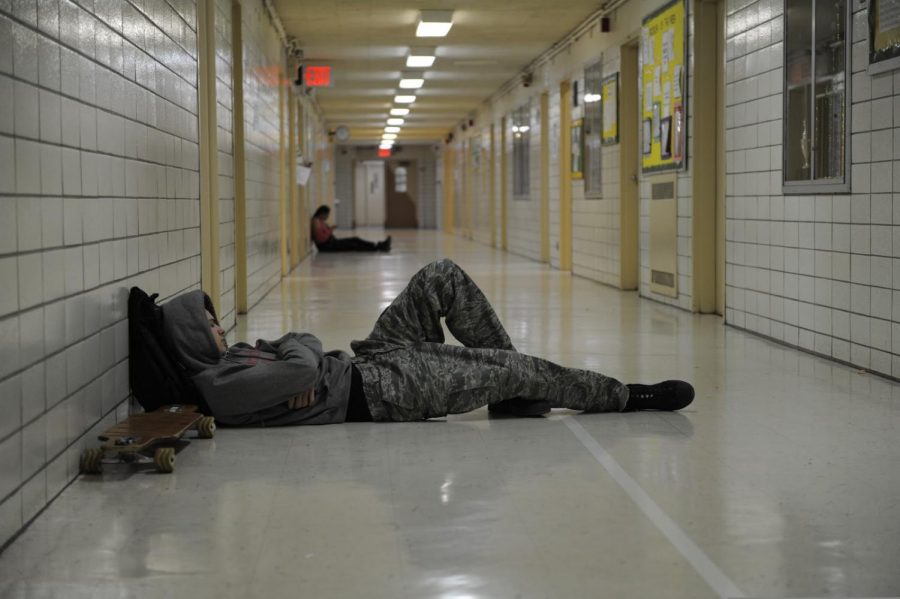 Students often try to catch a few minutes of sleep during their free periods.

Bronx Science is regarded as one of the best high schools in the nation, offering a multitude of courses to satisfy students’ passions. Bronx Science students are seen as hardworking, diligent, and dedicated. Yet, they often sdo not get enough sleep in search of such success. Sleep, a vital aspect to students’ health, is frequently overlooked, with many students going to class with significantly less sleep than they need.

Within the last few decades, sleep deprivation has become a major issue among high school students. According to a 2006 study by the National Sleep Foundation (NSF), more than 87 percent of high schoolers in the United States receive much less than the recommended eight to ten hours of sleep. Although studies show that both adults and teens in modern nations don’t get enough sleep, the problem is especially prevalent among teens. In a study by the American Psychological Association, 57% of surveyed teens did not feel that they got enough sleep, with 79% reporting that they only got seven hours or less of sleep on a typical school night.

Most students reported sleeping between 12:00 AM to 2:00 AM on a normal school night, and waking up between 5:30 to 6:30 AM. There are a multitude of issues that contribute to the negative sleep habits of students. Approximately 60% of students said that they had too much work each night, with most of them also reporting procrastination and too little time to complete said work. Such reports of extensive workloads account for major disruption in sleep patterns. However, it is important to note that the late sleeping habits of students are not entirely in their control. During adolescent years, the circadian rhythm shifts forwards about two hours, with teens becoming sleepy around 11:00 p.m. Combined with homework, study habits, and early wake up times, it can be hard to get anywhere close to the recommended amount of sleep.

In response to the sleep deficit, Bronx Science has implemented many programs to help students alleviate stress and work on time management. In a recent interview with S.O President Anthony Bonavita ’20, he said, “The main way the S.O. wants to alleviate stress this year is by providing students with outlets to relax and distract from the stress of schoolwork.  Surprises such as giving out lollipops in the morning, or ‘relaxifying’ the college office with board games and snacks, are some of our goals to continue this year.” Additionally, the S.O is working on ways to expand Mental Health week. Instead of limiting mental health awareness to five days of the year, the S.O hopes to promote wellness every day of the school year. Bonavita said, “Something we want to do more often is getting food and games in the college office, sort of making it into a lounge for students.  We are always looking for others ways from the students on how to have more students participating.”

Students have also voiced their own solutions. Of the 754 surveyed students, 72.7% believed that school should start later, with such responses varying between 9:00 am – 10:00 am. Although some may see this as an excuse to sleep in, later start times have shown to improve students’ mental health and overall performance. In 2016, Seattle public schools changed their start time from 7:50 am to 8:45 am. Researchers found that students on average gained 34 minutes of sleep, became more alert and engaged, and improved their final grades by 4.5%. Most importantly, the later start time helped combat chronic sleep deprivation and depression among students.

As sleep deprivation continues to effect the student population, it is important to search for meaningful solutions to help students get the necessary rest they require. Recent implementations by S.O are aimed at alleviating stress in students, and reforms such as later start times can improve student health. However, students must also work on their own time management to ensure healthy sleep cycles.

Students must work on their own time management to ensure healthy sleep cycles.