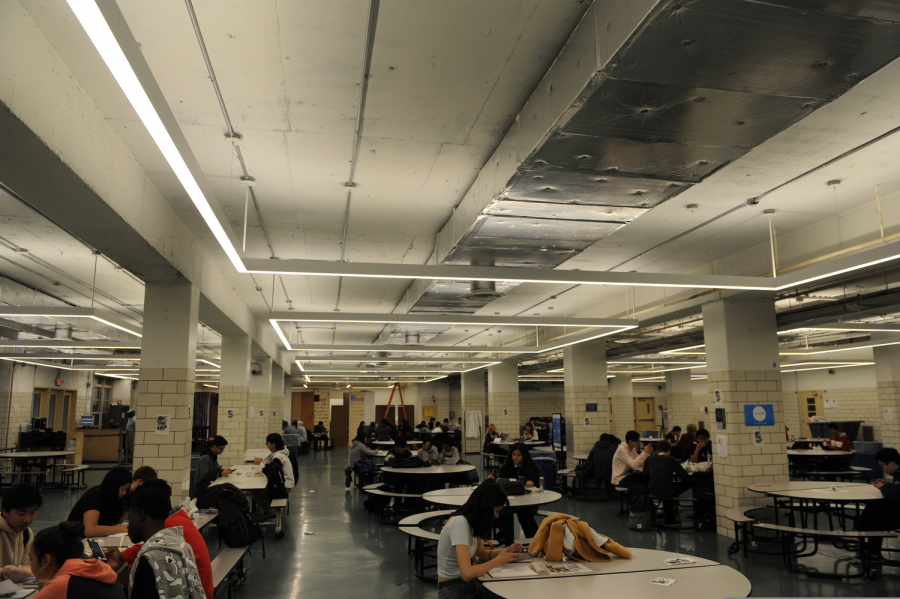 The new cafeteria lighting is now in use!

Bronx Science’s cafeteria has been untouched for the past sixty-one years since it was first built in 1958. Now, it’s finally getting an update.

The idea of renovating our cafeteria had been brewing over the last few years, but in early spring of 2018, Ms. Cooper, the Assistant Principal of Organization, and Ms. Coufos, the Vice President of the Alumni Foundation, decided that it might be time to seriously pursue their goal. With this notion in mind, they reached out to members of the Bronx Science Parents’ Association to see if others also wanted the cafeteria to be renovated. The PA was thrilled with the idea and they were able to raise some money at their fundraiser that spring.

That fall, Ms. Cooper and Ms. Coufos wanted to get students involved in the project as well. Ms. Parness, the Coordinator of Student Affairs, sent out an e-mail with a form for students interested in joining the Cafeteria Committee, a group who would work with the administration to input their ideas into the new cafeteria design at Bronx Science. All students were welcome, but based on responses and scheduling, those who made up the core group of participants were Abigail Aronson ’19, Davide Hallac ’20, Kelly Liu ’21, Syed Mehran ’20, Suzune Montag ’20, Ula Pranevicius ’20, and Vivek Talapaneni ’19.

Both the students and school leaders went to work. The committee was responsible for redesigning the interior of the cafeteria, including new furniture and new finishes. To do this, they looked at numerous college cafeterias to create a modern cafeteria for Bronx Science. Mehran connected the school with an architect, who is also a Bronx Science parent, with whom he had previously worked. The architect and the committee soon began to have meetings to discuss what vision they wanted to pursue in the new cafeteria redesign. The team’s goal was to create a lounge-like feeling to attract students during free periods. “We wanted to completely reinvent the whole cafeteria in order to have a modern look to it,” said Montag. As the planning phase progressed through the school year, Bronx Science suddenly received a large amount of additional funds.

The trio of Corey Johnson, Speaker of the New York City Council, Rubén Díaz Jr., Borough President of the Bronx, and Andrew Cohen, a member of the New York City Council, gave Bronx Science $1.2 million in allocated funds to spend on renovating the school’s cafeteria. In addition to the funding from the city, alumnus Tony Ann Stavisky ’56, a current member of the New York State Senate, also donated a significant amount. The city’s allocation amounts to only a third of the project costs, however. Donations to the Alumni Foundation’s Green & Gold Fund will help close this gap and transform the cafeteria into a student center.

Plans for the final cafeteria entail significant changes. Ms. Cooper, Ms. Coufos, and the Cafeteria Committee plan to include a variety of different seating options, such as couches and booths, with an overall increase in student seating capacity. There will also be a senior lounge implemented in the back of the cafeteria, vibrant colors all around, and charging stations in specific locations around the cafeteria.

As students and staff eagerly await the final renovations, smaller changes are already taking place, such as the recently installed lighting and the soon to be installed ceiling insulation, which is on track to be completed by the end of January 2020. While most members of the Cafeteria Committee will not have access to their new cafeteria before they graduate from Bronx Science, they look forward to a future where students can enjoy its benefits. “I am excited to come back and see the renovated cafeteria that I helped to design for future generations of Bronx Science students,” said Montag.
Bronx Science’s cafeteria has been untouched for the past sixty-one years since it was first built in 1958. Now, it’s finally getting an update.