Every Patient is a V.I.P. 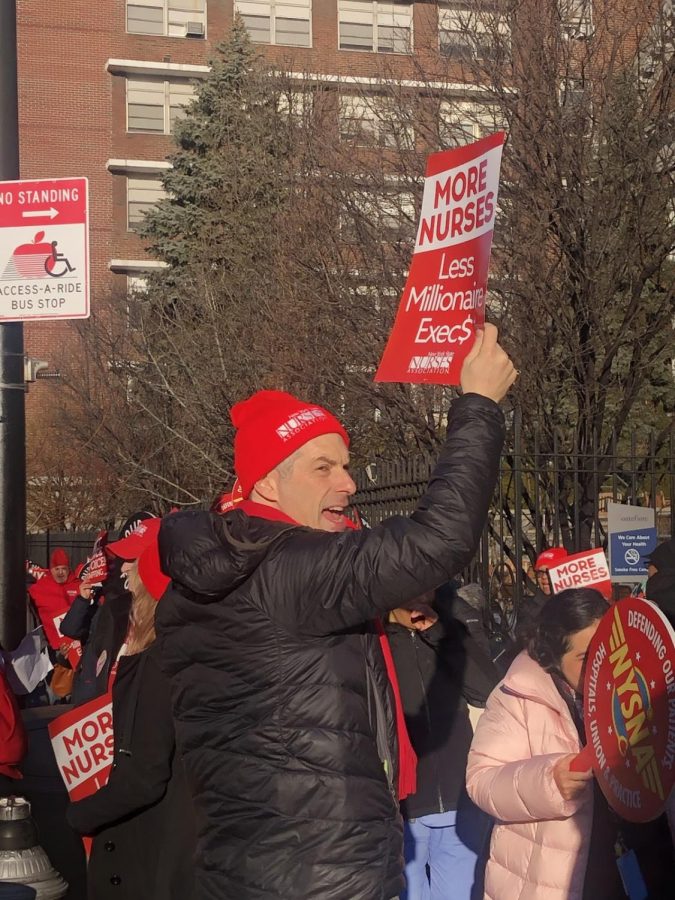 Picketers stand in the cold with thick coats and scarves on in order to fight the problems that Montefiore is facing. “At Montefiore, we currently have a few issues, not just with patient ratios and trying to make sure that the patients get the proper amount of care, but we’re also struggling with hallway patients right now and overcrowding,” said Michelle Gonzalez (not featured in image). “So we’re trying to make sure that every patient in the Bronx has health equity.”

On February 13, 2019, a horde of medical professionals and hospital staff marched in 40 degree weather resolve the issue of staffing in Montefiore Medical Center Hospitals. Due to under-staffing in local Montefiore Hospital emergency rooms, people like Judy Sheridan-Gonzalez, president of the New York State Nurses Association, have been organizing and attending peaceful protests to push a negotiation with  Montefiore board members. Not only is this issue local, as the hospital in reference is on Rochambeau Avenue and only ten minutes away from Bronx Science, but this issue is a dangerous one. As medical services become more and more expensive for U.S. citizens, staffing is being undercut. Our doctors and nurses are working long hours with little time to take care of each patient as the patient-nurse/doctor ratio is increasing. The protests in question aim to rectify these issues.

Montefiore representatives are refusing to accept their terms. The Human Resources Department, nursing leadership, a law firm from Hoskower, and the League of Voluntary Hospitals (The Alliance), a combination of Mount Sinai, New York Presbyterian, and Montefiore Hospitals, are having multi-employer negotiations. These negotiations have been going on since October of 2018; after twenty-two meetings, they still have not come to an agreement. Ms. Renee Tucker, member of New York State Nurses Association (NYSNA) and RN for Montefiore Medical Center, argues that change is overdue. “It’s time to let our members, our community, and our legislators know that we are here for safe staffing and that we are out here so that it can become a reality,” she said. “It’s a very important issue to all of us. Patients deserve a nurse that can devote the time to them that they need.”

What makes the current ratio so unstable and such a problem to the community is how high it is. “There are many areas where you have to have different staff ratios,” said Ms. Sheridan-Gonzalez. She said that it all depends on the equity, illness, and care that the patients has and needs. “In a typical medical surgical unit where the patients are post operative, have pneumonia, asthma, congestive heart failure, and diabetes,” she said, “the standard is really 1 to 4: one nurse per four patients.” What she next described Montefiore’s ratios to be justifies the use of the word ‘insane’. “If you’re going out on a break, if you want to eat lunch, if you’re going to the bathroom during a 12 hour shift, you have to sign those patients out to another nurse who already has that kind of a load,” she said. “Now one nurse is caring for about 24 or 25 patients when the standard is four.”

Despite the reduced ratios,, Montefiore currently will not negotiate a contract with safer patient/staff ratios. According to eight year medical ICU nurse, Ms. Michelle Gonzalez of Montefiore Medical Center, in negotiations, Montefiore will not make any movement until the safe staffing proposal is taken off of the table. “This affects not just nurses, but it affects our community,” she said. “Because of these unsafe ratios, our community isn’t able to receive the excellent care that they could receive if they had a nurse that was present with them who was able to give them their full attention.”

Attention is exactly what they are trying to get from Montefiore Medical Center Officials. “They want to be able to have the power to do what they want to do, but we feel that we’re the professionals and we can judge what our patients need the best,” said Ms. Sheridan-Gonzalez.

To justify their reluctance to negotiate, the hospital has claimed to not believe in ratios. Sheridan-Gonzalez said, however, that this statement is far from the truth. “When we say ‘I need another nurse to help me out’, they say ‘You only get six’ or ‘you only get five’, so clearly, they’re working with numbers,” she argues. “They also say, ‘We believe in looking after the patient’, but when we tell them what our patients need, they don’t listen to us,” said Sheridan-Gonzalez.

The magnitude of the problem is definitely large, and nurses and doctors are not waiting until it affects their community in a more of a major way. “I’ve lived in this community for many years. I am fighting for my community,” said Sheridan-Gonzalez. “I’m fighting for my neighbors, I’m fighting for my patients, and I’m fighting for the nurses. We’re all fighting for our community. We want to be able to deliver the best care possible and we can’t do it with the staffing that we have.” Ms. Michelle Gonzalez concurs. “I am a Bronx girl, so naturally, this means everything to me. If we are able to fight for this community and win this, it would mean so much, not just to me but to the people who live here.”