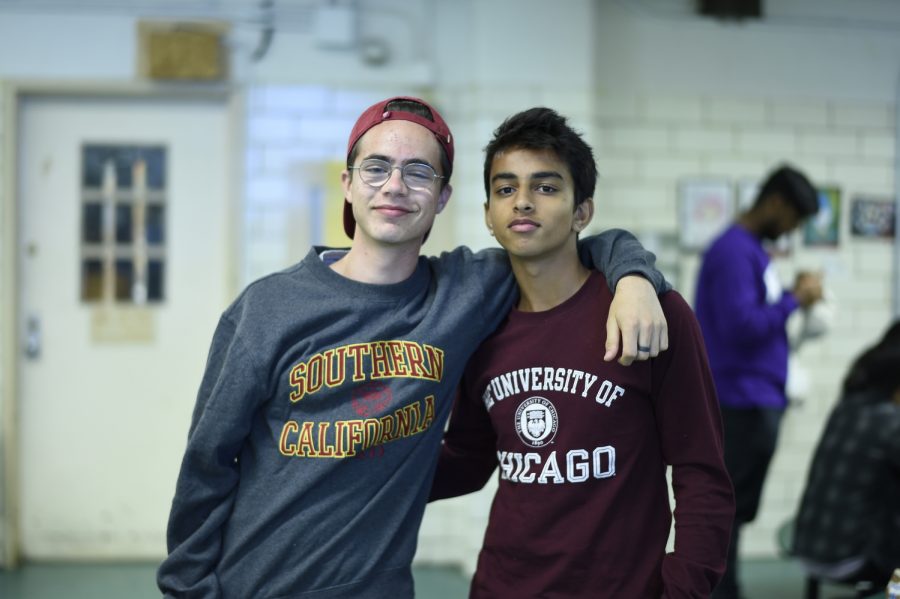 Students pose for College Apparel Day as thousands across the country receive this year’s admissions decisions.

Eight prestigious universities are facing massive backlash due to rampant accusations of wealthy families cheating the college system.  Nicknamed “Operation Varsity Blues,” prosecutors alleged that dozens of parents, test administrators, and college coaches were involved in a mass effort to sway the admissions process in their favor.  Over fifty people have been implicated in schemes to cheat on standardized tests and bribe their way to acceptances from elite college institutions.

“I wasn’t at all surprised.  The college system is overloaded with inequality where the wealthy have a leg up in every aspect of the process,” said Alejandro Torres ’19.

One of the two most widely spoken about cases involve actress Felicity Huffman who along with thirteen other parents plead guilty to fraud conspiracy on the standardized tests.  Huffman in particular paid $15,000 dollars to get her older daughter a higher SAT score. Actress Lori Loughlin and fashion designer Mossimo Giannulli were accused of bribing the rowing coach of USC to get daughter and youtuber Olivia Jade admission to the school. Meanwhile, records have shown that Jade never actually participated on the team she had been recruited for. To add fuel to the fire, Jade has been widely criticized for her remarks regarding the USC education she received.
“I think that an applicant benefiting from a donation to a school is fine because at least you’re helping the students that attend.  But, paying off a coach to lie is dishonest and goes straight to the individual’s pocket. The university never sees any of it,” said Joseph Moser ’19.
“I used to watch Olivia Jade on YouTube.  Even through her videos it was clear that she was not attending school for the academics,” said Julia Haberfield ’19.

But Jade’s story wasn’t the only one that involved a false athletic talent. In fact, five college coaches have been accused of accepting bribes.  William Rick Singer is being identified as one of the masterminds of the scheme, being charged with money laundering conspiracy, racketeering, and obstruction of justice. Through two firms that he controlled, Key Worldwide Foundation and The Edge College & Career Network, Singer funneled money to coaches and university staff.  He aided in creating false athletic profiles for students, leading one family to pay $1.2 million dollars for entrance into Yale University and $600,000 dollars for entrance to Stanford University.  He now faces up to 65 years in prison and fines of $1.25 million dollars after confessing that he unethically aided 750 families in their college admission processes.

“I think that an applicant benefiting from a donation to a school is fine because at least you’re helping the students that attend.  But, paying off a coach to lie is dishonest and goes straight to the individual’s pocket. The university never sees any of it,” said Joseph Moser ’19.

In light of recent events, many of the colleges involved in this massive conspiracy have been taking steps to better their community and ensure events like these don’t happen again.  USC and Wake Forest University, for example, are using the money received from the scheme to provide scholarships to underprivileged students. They, along with UCLA, Stanford, Yale, University of Texas at Austin, Georgetown, and UC San Diego are currently undergoing internal reviews and potentially revising the admissions process used to recruit college athletes.

It is our hope that such abuses of the system can no longer occur in the future.