The Costs of Prom

A commonly recognized coming-of-age event for teens, prom can be an expensive night for those who want to cherish a once-in-a-lifetime event. 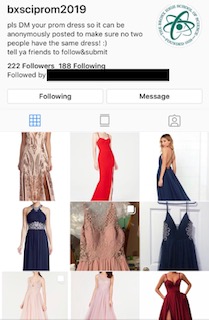 The Bronx Science Instagram page, where students submit pictures of their prom dresses.

Prom. Pop culture defines it as a coming-of-age event that many American families consider the bridge between adolescence and the beginning of adult life. Television shows and movies glamorize the process of finding the perfect dress or date, or even a grand entrance with luxury cars. With this mentality, it is no surprise that teens and their families go “all out” with everything involved in prom preparation.

According to a 2015 national survey from Visa, the average cost of a “promposal” and prom for American families was $919. With increasing pressure to create unique promposals that leave lasting memories, students can go to once-unimaginable lengths, like skydiving with posters or elaborate dates.

In New York City, where desirable venues are expensive, prom ticket prices can be some of the highest in the country; Bronx Science prom tickets are $164.16 for dinner and prom at a well-known venue, Chelsea Piers. For high schoolers in North Carolina, it can cost $45 a ticket, and in Chicago, $95 for a night that includes whale watching.

Though events vary by location and school, one thing remains the same: prom is not a cheap excursion. The costs can stack up, with money going toward attire, hair, makeup, nails, accessories, prom ticket(s), costs with after-prom festivities, transportation, and so on. For those who want to wear dresses, the pressure to find the perfect one expresses itself through various means. Most schools have pages on social media platforms like Instagram and Facebook, where pictures of each person’s dress are posted anonymously so that other students do not purchase the same one or one that is too similar; as to avoid wearing the same dress or ‘outshining’ one another on the special night. It is also not uncommon for students to purchase dresses with prices ranging in the several hundreds of dollars—Mac Duggal, a popular prom dress brand, features designs that cost up to $800 on Nordstrom, with its cheapest dress at $253 after sale.
…it’s no surprise that teens and their families go “all out” with everything involved in prom preparation.
“I thought that my dress was really expensive, and I had to work to save up the money that I needed for a prom dress. The process was really rigorous, and it took me four months because finding your perfect dress is really difficult, and not every dress is made for every body shape,” said Allison Yu ’19. Sentiments like these fuel the prom industry, with the anticipation of a perfect night as a summation of the total of teenagers’ high school years as they move onto college and more independent lives.