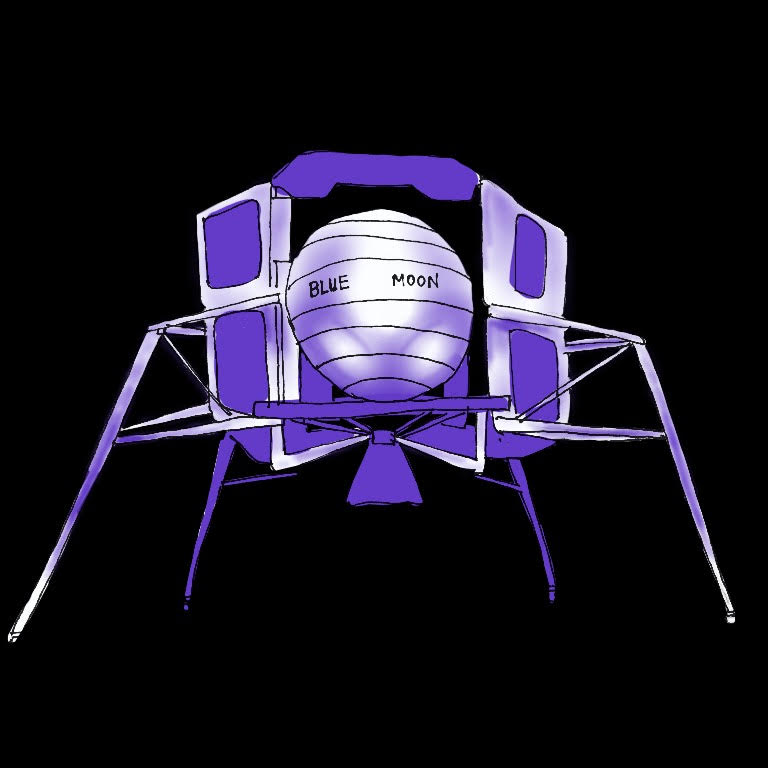 An illustrated rendering of the Moonlander design.

With astronomical wealth comes astronomical ambitions. But in this case, “astronomical” is quite literal. Jeff Bezos, C.E.O. of Amazon and C.R.P. (Current Richest Person) of Earth, has long held lofty aspirations for space. And recently, he and his space company, Blue Origin, have outlined a definitive plan to make space travel a reality. First stop: the moon.

Yet humanity has already made it to the moon. That is so, but not in the way Bezos’ envisions it. Flags and footprints are to be superseded by much more ostentatious marks of humanity’s progress, embodied in orbiting space settlements. The massive colonies, dubbed “O’Neill Worlds,” are projected to occupy 1 trillion people. Their unlikely inspiration and namesake comes from physicist Gerard O’Neill, who had posited the model back in the ’70s. As of the near future, Bezos believes a seminary moon lander could be sent up as soon as 2024, bringing us one step closer to the stuff of science fiction.

To start with, he had started Blue Origin back in 2000. Since then, the company has accomplished many successful test flights and made large strides in the field, bolstered by 1 billion in funding from Bezos’ Amazon stocks. According to the Blue Origin website, the company has already made significant strides, such as launching a fully reusable rocket system called New Shepard, creating a launch vehicle capable of carrying humans and cargo on repeat missions called New Glenn, and developing the first ox-rich staged combustion engine in the United States. However, it has mainly kept a relatively low-profile in terms of media attention due to a noticeable lack of significant press events — until now.
“I believe that while [space exploration] is an important thing to tackle, some of the money invested in this should go to advancements to tackle the more immediate issues of our society,” said Ethan Ha ’19.
It had started cryptically enough. An innocuous tweet from the Blue Origin official account, posted on April 26th, 2019, had simply listed the date “5.9.19,” followed by a monochrome picture of a three-masted schooner. Netizens did some sleuthing to divine the meaning. The ship’s name was called Endurance, and it belonged to Ernest Shackleton, a twentieth-century Arctic explorer, and after whom one of the moon’s craters is named. True to form, the tweet did indeed involve the moon. More specifically, Blue Moon, a moon lander capable of delivering payloads of varying weights to the lunar surface. These are payloads that, if all goes as planned, will be able to accommodate human cargo.

Part of the Blue Moon rover’s ability to transport humans can be attributed to one of the engines that Blue Origin has developed, the BE7 engine. BE7 is fueled by hydrogen, which is awfully convenient because lunar ice may a large abundance of that element. Blue Moon’s unique structure likewise prepares it for the surface landing. All of these features and more seemed to be implied in the climactic unveiling of the moon lander in a ballroom on May 9th, 2019, a ballroom that is a five-minute drive from the White House, not a coincidence.

After all, given the current administration’s stance on future space development, Bezos’ Moon lander announcement is uncannily timely. Vice President Mike Pence has expressed the hope that NASA will undergo a lunar surface mission as early as 2024, while President Donald Trump has tweeted “Under my Administration (sic), we are restoring [NASA] to greatness and we are going back to the Moon, then Mars,” along with a declared budget expansion of 1.6 billion dollars to make it happen. The joint program between NASA and the government to send Americans to the moon is called “Artemis,” but according to ‘The New York Times,’ doesn’t seem to have made much headway. After all, the original 1972 fervor that brought man to the moon has undeniably dwindled ever since as governments focused on more issues closer to home. This is, presumably, where the billionaires come in.

Bezos has not been the only rich entrepreneur with his head above the clouds. In fact, he seems to have taken a leaf out of Elon Musk’s book in the flamboyance of the reveal and the ambition of his scope. The Tesla C.E.O himself even had something to say about it, albeit not very subtly. “Oh stop teasing Jeff,” he tweeted regarding the press release for Blue Moon, shoeing in a cheeky winking emoji for good measure. Elon Musk is founder of his own space company, SpaceX, and prioritizes our other neighboring celestial body, Mars, over the moon as grounds for viable habitation.

With the present executive government backing space exploration endeavors, both Bezos and Musk are in a very good position to realize their distinct visions. Yet the elephant in the world remains: climate change is becoming an increasingly pressing issue, and our mother planet needs all the help it can get. Many believe that the last thing the Earth needs right now is for the people best suited to help the crises to start gallivanting toward space. To them, it feels like abandonment. To address such concerns, Bezos responds, “There are immediate problems, things that we have to work on… But there are also long-range problems, and we need to work on those too.” Ethan Ha ’19 takes a similar view: “I believe that while [space exploration] is an important thing to tackle, some of the money invested in this should go to advancements to tackle the more immediate issues of our society.”