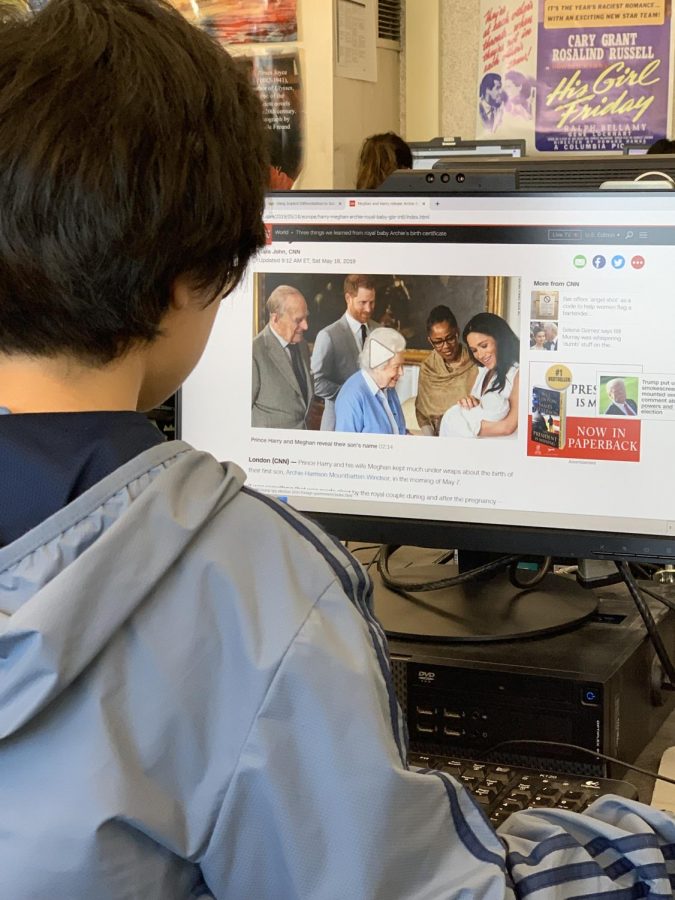 Angie Yang '19 reads an article from CNN dedicated for the arrival of Archie Harrison Mountbatten-Windsor.

Fanfares and trumpets blaring, large crowds cheering, confetti decorating the sunny morning of May 6th, 2019 was what most would expect to see for the celebration of the birth of a new royal member, Baby Archie Harrison Mountbatten-Windsor. Instead, mother Meghan Markle, Duchess of Sussex, and father Prince Harry, Duke of Sussex chose to introduce the birth of their new baby in a more subtle manner. Maybe, too subtle for someone breaking traditions, left and right? Archie Harrison Windsor didn’t make his debut until two days after his birth and even then, not many personal details were shared to the public, similar to how it was for Prince William and Duchess Kate’s children.

From what we know, Archie is quite different from the other royal babies. First and foremost, he doesn’t have a royal title. Although Queen Elizabeth II offered to bestow a royal title for her new great-grandchild, both the Duke and Duchess of Sussex turned down her offer, “all part of giving him as normal a life as possible,” said royal correspondent Omid Scobie. If Archie were to have a royal title, it most likely would’ve been Earl of Dumbarton. But since his parents opted to not give him a royal title, he will instead carry out the family last name, Mountbatten-Windsor.

Baby Archie is also the first biracial royal. While his father is of complete Caucasian descent, his mother is of both Caucasian and African descent. With multiple “labels” to identify with, Archie will inevitably encounter confusion over his ethnicity. Duchess Markle remarked, “As a mixed race woman, I know this baby’s identity is something that he will likely struggle with.” However, amidst the increasingly diverse population of Britain, many consider him as an emblem of the “emergence of a new mixed-race majority that closely identifies with its British ancestry,” said Eric Kauffman of ‘Foreign Policy Magazine.’ Although he doesn’t know it yet, he gives hope to the biracial community all over the world.
“Archie is destined to make his mark in history, and it’s already begun,” said Lin Zhang ’19
Blessings of happiness and congratulations flowed in from all parts of the world for the historic moment. Members of the royal family, particularly Queen Elizabeth and Prince Philip who were the first royals to greet Archie, were pictured in bright smiles on their first meeting with the new baby. “Everyone’s very welcoming for the arrival of baby Archie. Just as his name, Archie, which means ‘genuine, bold, and brave,’ he’ll clearly make an impression, even if he’s not in the spotlight as of now, due to the wishes of his parents who prefer a quieter lifestyle. The future holds a lot for him,” said Yue Zhuo ’19.

Soon after, Prince William and Duchess Katelyn privately met with their nephew a week after his birth. To express her excitement and joy for the blossoming family, Duchess Kate even brought an adorable stuffed animal doll for Archie which was originally given for Prince Louis. “I’m very pleased and glad to welcome my own brother into the sleep deprivation society that is parenting,” said Prince William. Duchess Kate added, “It’s such a great time of year to have a baby, spring is in the air. It’s really exciting for both of them. These next few weeks are always a bit daunting the first time round, so we wish them all the best.”

For Prince Harry and Duchess Markle, it would be their first time parenting. But it looks like for the past month, they’ve already got the swing of things. “It’s great. Parenting is amazing,” Prince Harry said. “We’re just so thrilled to have our own little bundle of joy and be able to spend precious times with him as he slowly, slowly starts to grow up,” added Markle.

“Archie is destined to make his mark in history and it’s already begun,” said Lin Zhang ’19