Amazon Backs Out of Plans for New York 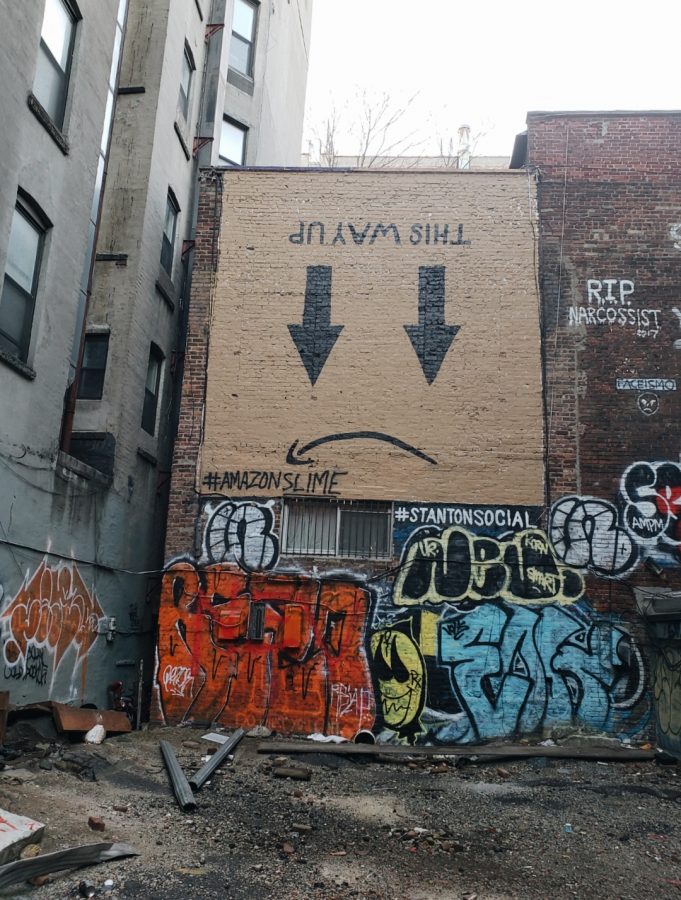 An anti-Amazon mural is painted above an empty lot at 159 Ludlow Street in Manhattan.

This giant retailer sells more on Cyber Monday than any other company in the world. A cornucopia for consumer choice, anything one needs can be bought from its website and delivered within a couple of days, or fewer, with the company’s ‘Prime’ membership. Headquartered in Seattle, Washington for more than two decades, Amazon has sought to expand and open a second headquarters since early 2017.

After a long and arduous process during which the governments of more than 200 cities across Canada, Mexico, and the United States submitted proposals to the giant retail and technology company, Amazon reported that its original plan to simply establish one new headquarters will be slightly modified. The company planned to open two headquarters on the East Coast: one in Crystal City, a suburb of Arlington, Virginia (still in the works), and one in Long Island City, a neighborhood in Queens, New York (which company officials recently pulled out of on February 14th, 2019).

The decision to split such a major project triggered a flurry of criticism and speculation about Amazon’s original intentions. It also raised questions about how equal the new headquarters would be to the one in Seattle, which boasts more than 45,000 employees. However, the retail giant originally pledged to invest at least $2.5 billion into the New York headquarters and the surrounding community. According to ‘The New York Times,’ Amazon was looking to establish a pipeline for gas near LaGuardia Community College and had promised to participate in résumé workshops and job fairs at the Queensbridge Houses, the largest public housing complex in the United States.

Long Island City, a major industrial neighborhood in New York, has been experiencing enormous growth over the last few years and Amazon’s presence would have further intensified this growth. “The new Amazon headquarters would have made Long Island City another major business center in New York, in addition to Downtown and Midtown. It would have been interesting to see how the commercial sector grew in Long Island City and how other companies would have reacted,” said Eshaan Modi ’19.
“Had Amazon, Mayor de Blasio, and Governor Cuomo listened to the concerns and wishes of local residents, perhaps residents would not have had the same animosity they did towards the secretive and incentive-rich deal given to one of the world’s largest corporations.”
When first announced, Mayor Bill de Blasio called the Amazon deal the “single biggest economic development deal in the history of New York City,” according to ‘The Wall Street Journal.’ Governor Andrew Cuomo told a ‘New York Times’ reporter that it would be “a great economic boost.” Through the company’s direct hiring and investment, as well as construction and operation of the second headquarters, thousands of jobs would have been created.

“The new Amazon headquarters would have been good for New York; since the company was promising salaries that would have averaged over $150,000, more workers would have been encouraged to participate in the workforce. Right now, New York and America need a change. More people, especially those who are lower and middle-class, need to be able to work and to have better lives. Amazon coming to New York would have provided a great opportunity for that to happen,” Faika Tabia ’21 said.

“For people like me who wish to pursue careers in the computer industry, it would have been amazing, especially since New York City has mainly been known as the business and financial capital of the world,” Ryan Yam ’19 said. Amazon would have provided people like Yam with opportunities they would not have found previously unless they were situated in Silicon Valley. Furthermore, the company had pledged to hire more women and minorities to help to close the gap between genders and races that exists within the technology industry.

Despite these economic benefits, however, not everyone had been a fan of the company’s now cancelled plans to move to the city. Among the displeased were immigrant advocates who took issue with Amazon’s association with the United States Immigration and Customs Enforcement (ICE). A new report by Empower LLC claims that Amazon has built a “revolving door” system through their relationship with ICE that entrenches their role in the deportation and incarceration process.

Thousands of protestors filled the streets of New York on Cyber Monday of 2018, holding signs in Spanish and English as well as ones that depicted Amazon’s logo with a frown instead of a smile. Congresswoman Alexandria Ocasio-Cortez, who represents New York’s 14th Congressional District near Long Island City, expressed outrage on behalf of residents in the area about the company’s plans. She said in a Twitter thread that Amazon’s presence would not bode well for residents struggling to make ends meet in an area that is already quickly growing, particularly in the real estate sector.

Furthermore, residents of the area were furious that the city decided to accept Amazon’s proposal without asking for community input. Many residents did not support the city’s plans to give the giant corporation a three billion dollar tax break, because they believed that the city government did not have their best interests at heart.

“Had Amazon, Mayor de Blasio, and Governor Cuomo listened to the concerns and wishes of local residents, perhaps residents would not have had the same animosity they did towards the secretive and incentive-rich deal given to one of the world’s largest corporations,” Sebastian Baez ’19 said. Additionally, Amazon’s presence in Long Island City would have posed traffic concerns in the area, since many New Yorkers already pass through on their commute between boroughs.

“The subway lines in Western Queens are already at capacity, as anyone who has tried to take the number 7 train into Manhattan can tell you. The influx of new workers who would have been absorbed by the city would have put further strain on an ailing, overcrowded system. Moreover, Long Island City is an entry point into Manhattan for cars, trucks, and buses, so the large presence of Amazon would have increased traffic around the already-dense neighborhood,” Baez said.

The powerful resistance from much of the local community in Long Island City has led Amazon to back out of its plans for the New York headquarters. State and local politicians, such as State Senator Michael Gianaris, along with progressive groups, rallied and petitioned against the company in Queens. As of Thursday, February 14th, 2019, Amazon has said that it has no plans to reopen the search for a second location, which leaves Crystal City, Virginia, as the only standing contender for the new headquarters. As of press time, Governor Cuomo has been actively engaged with Amazon executives to try to get them to reconsider, but so far, they have not.

In an official statement, the company said, “For Amazon, the commitment to build a new headquarters requires positive, collaborative relationships with state and local elected officials who will be supportive over the long-term. While polls show that 70% of New Yorkers support our plans and investment, a number of state and local politicians have made it clear that they oppose our presence and will not work with us to build the type of relationships that are required to go forward with the project we and many others envisioned in Long Island City.”