Alexandria Ocasio-Cortez: A Woman of Change 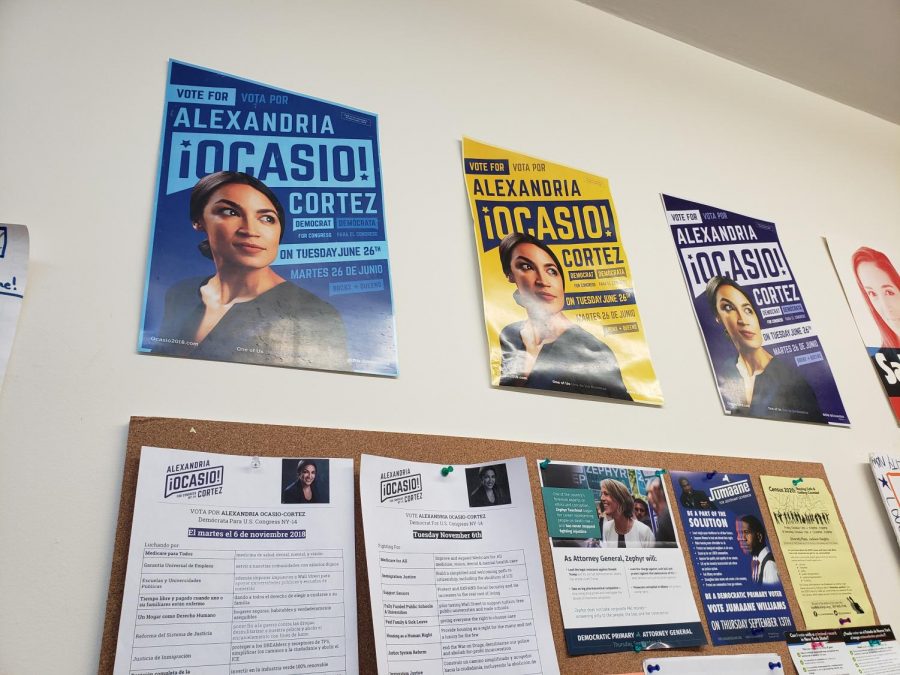 The walls of the campaign office are filled with eye-catching posters of not just Alexandria herself, but of fellow politicians whom she supports.

Countless cars zoom by a group of tightly bunched stores at a wide intersection in the East Bronx. While this may seem like any ordinary bustling street, what passersby do not know is that the recently most-talked about person in the political world, Alexandria Ocasio-Cortez, has her headquarters nestled in this very place.

For a political star of her calibre, the surroundings of the office are rather humble, much like Alexandria’s own upbringing. Up until a few months prior to her victory over incumbent Democrat Joe Crowley, she had been working as a waitress in Manhattan. She is a Bronx native whose family is not “rich or powerful,” according to a Facebook post that she wrote last June 2018. Her mother earned an earnest living mopping floors in order to raise her, and her father, a Puerto Rican immigrant, died when she was young. Her mother recalls Alexandria’s political leanings from a young age, saying that even as a young girl, she was never afraid to speak her mind.  “Alexandria is also backed by all those immigrants and young millennials. Joe Crowley explicitly stated that he misjudged millennial votes; it’s a very powerful movement,” Sowad Karim ’19 said. He was on his way to Alexandria’s campaign office in Queens, right after school on Friday, October 19th, 2018.

Many say that Alexandria Ocasio-Cortez is a woman who is a sign of change. “El valor para cambiar (The Courage to Change),” her campaign slogan reads. From making citizenship more easily attainable to making public colleges tuition-free, her platform is characteristic of a Democratic socialist. “[Alexandria’s presence in Congress] is going to change the Democratic Party forever,” said Karim ’19. Karim, who was decked out in gear with ‘¡OCASIO!’ in bold letters, had started canvassing for Alexandria in early October 2018. “Good way or bad way, that’s up to the people. In general, she’s going to help the people,” he said. But even as an avid supporter, Karim has some reservations about Alexandria’s dynamic, democratic-socialist policies. For instance, her plan to abolish ICE caused significant backlash in the media since its wide publication during her campaign.

But away from the political world, out in the streets, Alexandria is taking action. Often portrayed in media as kneeling down to speak eye-level with children and stopping to graciously thank passersby who voice their support, she is building a solid image as a politician with whom people can finally relate. “She established herself as an unconventional candidate and gained recognition,” said Karim. He was accompanied in canvassing by several Bronx Science seniors, such as Jenna Ye ’19. “Her being a woman and declaring to run for a congressional position is very empowering,” said Ye. “It connects with the masses of disenfranchised women and racial minorities. It’s one of the main reasons why I support her.”
“Alexandria’s presence in Congress is going to change the Democratic Party forever,” said Sowad Karim ’19.
When asked if anything stands in Alexandria’s way, campaign manager and Bronx Science alumna Naureen Akhter expressed confidence. “We aren’t too worried about her chances of winning since she is the democrat running in an 85% democratic district. Our priority is turnout, ensuring that as many voters turn out as possible. That way, she goes to Washington D.C. with a high win number and a mandate. There are a small number of voters who are voting for the incumbent Joe Crowley, but the majority of this district is ready for change.”

“When I think of Alexandria, I think of a brand-new Congress,” said Karim ’19. In the campaign office, purple and blue cards detailing the campaign reads, “the ONLY candidate who rejects money from corporations and special interests.” The message is clear; she’s here to represent the people.

But regardless of who will end up in Congress after ballots close, the fact that Alexandria is heading to Congress shows that more and more young people are becoming involved in politics.

“Young people update politics. Even if you don’t follow politics, politics follows you. So if you’re not active politically, you’re letting those who are active dictate your life,” said Karim ’19. He suggests signing up to volunteer at local elections, attending movements and events, doing a quick Google search, or figuring things out and coming to your own conclusions. The possibilities are endless for high school students.