FDA Cracks Down on JUULing Epidemic 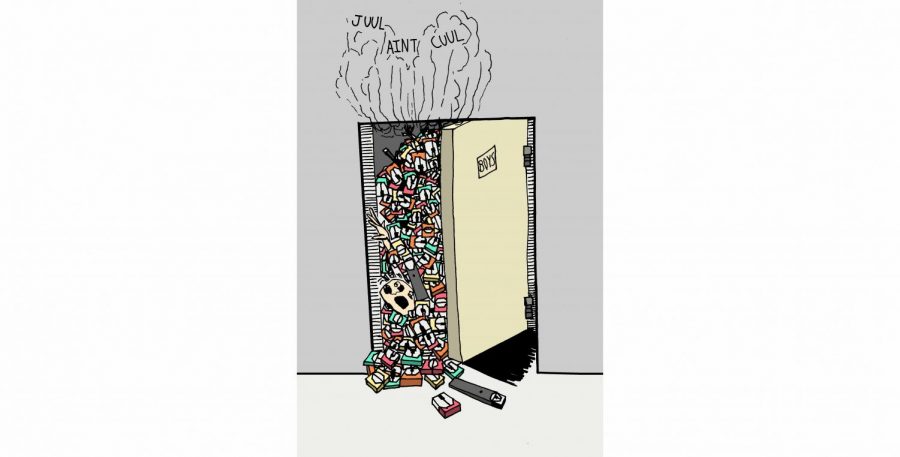 On April 24th, FDA Commissioner Scott Gottlieb announced that an alarming epidemic has gripped America’s adolescent population. Instead of the swine flu or HIV/AIDS, this nation-wide crisis was sparked by a small, handheld device, often mistaken for a USB drive: the JUUL.

According to a study by the CDC, roughly one out of every five high schoolers report using e-cigarette products. That’s around three million students nationwide. As for the health dangers, the most alarming part is that we still don’t know what all of them are. But in the eyes of Mr. Cogliano, the social worker at Bronx Science, JUULing cannot be good for you. “Nicotine is harder to get off of than heroin,” Cogliano said. “[If] you’re putting a substance that is highly addictive into a brain that’s still developing, that’s a recipe for a disaster.”

The experts agree. According to the Surgeon General, the human brain only finishes developing at around twenty-five years old. Ingesting nicotine before then can change the way synapses are developed, hindering attention and learning.

Further, because the brain is teaching itself how to function through every new synapse, becoming addicted to any substance primes the brain for future addictions.

The FDA’s new campaign is targeted towards all e-cigarettes, but JUUL is under particularly heavy fire for its enormous popularity among minors, who use these products illegally. After being introduced two years ago, JUUL has already dominated over 70% of the e-cigarette market share, and is now estimated to be worth around $16 billion. Many credit its enormous success to the wide range of flavors that it provides, ranging from cucumber to creme. JUUL’s mission statement suggests that these flavors exist to put an end to smoking. But are they encouraging non-smokers and minors to begin JUULing? Are these options pushing JUUL into the category of gateway drugs for adolescents? According to Cogliano, “JUULing is targeted towards kids, 100%. No adult cares about, you know, coco puffs, or whatever it is, fruit loops. It’s totally geared towards kids. It’s supposed to be this cool thing.”
“The problem with all situations is that the government is always late to react.”
As if appealing flavors weren’t enough to catch the attention of teens, the sleek packaging and discrete size make it virtually impossible to spot if someone has one tucked into their back pocket.

JUUL’s unique appeal and convenience for adolescents has the FDA suspicious, too. In an urgent effort to fight this epidemic, the FDA initiated its largest coordinated enforcement effort in the department’s history beginning in early March. A thorough sweep of e-cigarette dealers, online and in stores, has resulted in the issuing of more than 1,300 warning letters and civil money penalty complaints to retailers across the country for illegally selling e-cigarette products to minors. Further still, a harsh, 60-day ultimatum was issued to the five companies dominating the e-cigarette market: JUUL, Vuse, MarkTen, blu E-Cigs, and Logic. Their task? Actively discourage adolescent usage of their products. And if these companies cannot complete this essential task to the satisfaction of the FDA? Roll-out of the products in question will be terminated.

But was the FDA too late? E-cigarettes have been commercially successful since 2003, and were flagged for teen use by the Surgeon General in 2016. Mr. Cogliano says they should have moved to limit teen use earlier. “I think they’re really late to the game,” he said. “The problem with all situations is that the government is always late to react. You know, it’s always a reactive, not a proactive stance, which is unfortunate.”

Regardless, resources for the Bronx Science community regarding this startling epidemic are numerous. The Guidance Department, of which Mr. Cogliano is an essential member, is prepared to provide every student with the support they need. Whether it is avoiding or overcoming the abuse of substances, from JUULing and beyond, Mr. Cogliano said, “We offer counseling here. We have the SAPIS [Substance Abuse Prevention/Intervention Specialist] counselor, Ms. Morisset, whom students can go to as well, and if it’s needed, depending on the situation with whatever substance it is, we can refer them to outside services.”