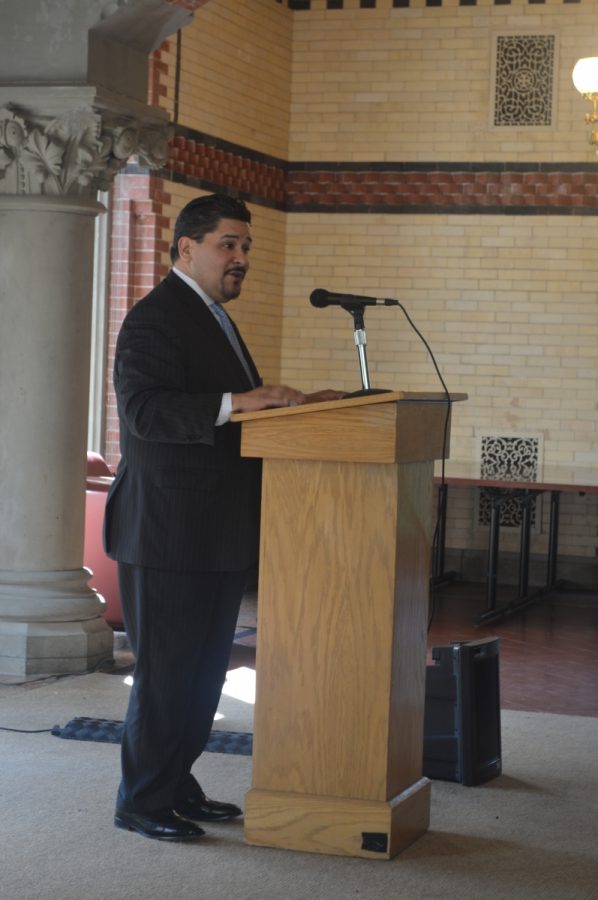 The NYC School Chancellor Richard Carranza speaks to student journalists at the round table discussion on May 9th, 2018.

Mayor Bill de Blasio had convinced one of the nation’s most successful educators, Alberto M. Carvalho, to become the Chancellor of the New York City Department of Education. But in less than twenty-four hours, the administration was shocked to see the official abruptly change his mind and renounce the offer during a live television broadcast. Fortunately, the administration had a qualified backup who he appointed instead, Richard Carranza.

Despite being second in line for the job, Carranza has earned the title as an experienced educator. He began his career as a bilingual social studies and music teacher in the public high school that he had attended as a teenager. Later, he served as a regional superintendent in Las Vegas and San Francisco, where he dramatically raised graduation rates. Most recently, he was the superintendent of the Houston Independent School District and led the effort to re-open schools after Hurricane Harvey.

Unlike his previous jobs, the new School Chancellor’s responsibility includes supervising and maintaining 75,000 teachers and 1,800 schools. Although the job may seem daunting, Carranza has already started to address various issues.

Carranza’s signature issue is school segregation; New York City schools are some of the most segregated in the country, and Carranza hopes to reverse that. School segregation occurs partially because of the reality of housing in New York City. Neighborhoods are separated by race and socioeconomic status: think Chinatown, Spanish Harlem, or historically black neighborhoods like Bedford-Stuyvesant.

However, much segregation comes as a consequence of New York’s focus on school choice. When parents pull children out of poorly performing neighborhood zone schools to send them to better performing schools elsewhere, this increases the concentration of poverty at the lower performing schools left behind.

“People live in certain places, people want to go to school in certain places. Well, what I don’t want is for us as a system to have created barriers that make it more difficult for students that are underrepresented to go to any one of our schools,” explained Carranza, at an event for student journalists on May 9th, 2018.

Currently, the School Chancellor is working on a program to desegregate the Upper West Side. He supports a program which would reserve 25 percent of the seats in every school in the district for students who come from schools with high economic needs and lower test scores.

Carranza highlights that there has been a continuous pattern where the failing schools attempt change, then merge and eventually close down. Though the chancellor has yet to speak with much specificity about how he intends to fix the program, he promises that his plan will parallel with the one he had in San Francisco, where he was able to increase student performance.

In terms of school safety, an issue which has drawn national attention following numerous school shootings, Carranza put much faith in the NYPD to deal with this issue. He also supported creating “hard targets,” already in place in government buildings, which make it physically hard to attack schools.

At the May 9th, 2018, event, Carranza also mentioned on a few occasions his support for student journalists’ free speech rights.“I believe in the power of the press. The press is there to hold people like me accountable to the people we’re supposed to serve,” Carranza reasoned. He mentioned that he himself used to advise a student newspaper and fought with his own administration and other teachers over the sorts of articles students could write.

Despite this, Carranza has yet to endorse the Student Journalist Free Speech Act, a bill in the New York state legislature which would expand student journalists’ free speech rights. He also has not mentioned any actions that he might take as chancellor to expand the rights of student journalists.

Also at the event on May 9th, Carranza highlighted a strong desire to invest more money in ensuring that students have the opportunity to go to college. He even went so far as to propose an unvetted idea straight from the podium: “Can you imagine how powerful it would be if every kindergartener that enters a school in New York City–every child that enters kindergarten–automatically gets a bank account with fifty bucks in it towards college?” Carranza said. “Think about that–and you can’t take it out…we get people to help us with this, and guess what? If you get perfect attendance, someone else will add fifty bucks on that; parents add fifty cents or a few dollars; you get a holiday gift card, you cash that in and put it in there–can you imagine what that would look like? It would be significant!”

Although supervising all the schools in New York City may be a hard job, Carranza is adapting well so far. Most would agree that he is experienced and motivated enough to improve educational quality across New York and make the school system more equitable.