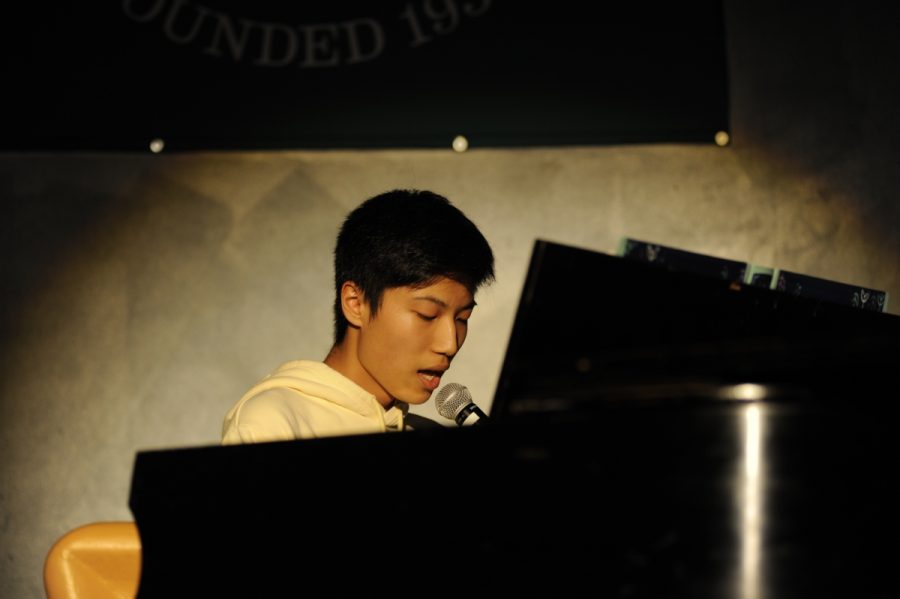 Joshua Cho ’21 pours his heart into a memorable performance of “One” by Ed Sheeran.

The spotlight wavers for a brief moment before settling on center-stage. With what appears to be two strings slung over his shoulder, Paul Cho ’18 appears from behind the curtains and walks with gusto into the light. As soon as he does, the entire auditorium is enveloped in darkness. This is not a technical accident. In a split second, Cho’s strings turn into colorful instruments known as “poi balls” and “glowsticks,” and the performance begins.

“I started practicing flow arts, which is the general term for poi/glowstringing, during summer camp,” said Cho. “It was the norm of the camp culture, and also good arm and midsection exercise.” The unusual and visually stunning performance had the audience fixated, as colorful green and blue lights streaked across a dark stage. “I don’t really practice flow regularly, so the Talent Show was a motivator to do it again. And when I swing my poi in school, it just doesn’t look right since there’s always a light source. The Talent Show was my way of showing what I really use them for — how I can move them in the dark.”

This year’s talent show included many different kinds of performances. There were  several piano acts. For example one student pianist, Vicki Zheng ’21, played the simple yet beautiful piece “River Flows In You.” “Piano isn’t exactly a ‘talent’ as it does not come easily to me, but I’ve been playing it for seven years now, so I learned that working hard pays off,” said Zheng. “I decided to play in the talent show because it is a wonderful chance to showcase the product of this hard work.” Another student, Joshua Cho ’21, played the piano while singing “One” by Ed Sheeran. “I started playing piano when I was seven, and started singing in middle school,” said Cho. “I played piano in a band, and started singing for fun while we were jamming, and it came naturally for me so I kept practicing.”