Leaders in STEM — The FeMaidens take the Nationals 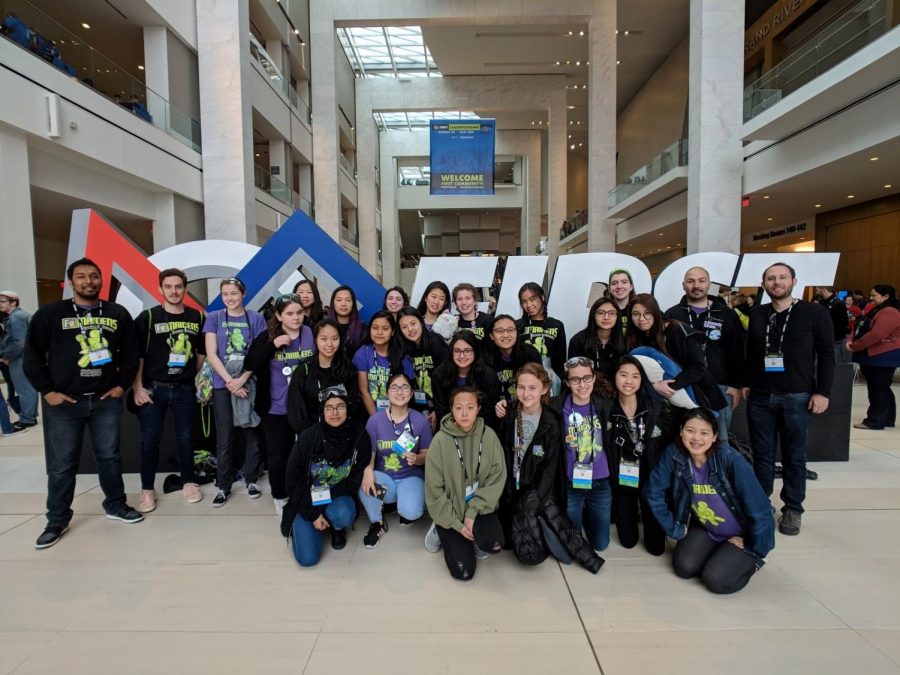 The FeMaidens and their mentors pose proudly at the FIRST Robotics National Championships in Detroit, Michigan.

Throughout the month of April 2018, Bronx Science’s FeMaidens had been occupied doing what they do best, building and competing with their most polished robot. Their accomplishments for this month include winning the Engineering Inspiration Award which  qualified the team for the FIRST Robotics Championships. The competition, spanning from April 25th to April 28th, 2018, took place in Detroit, Michigan.

The title of an “all-girls robotics team” is a label that the FeMaidens have inadvertently borne at school, at tournaments, and even around the world. This specific aspect of the team defines how it is portrayed everywhere, especially in making them stand out among their competitors at tournaments. Since they are one of the only high school all-female teams in the country, the FeMaidens are frequently portrayed by the media as pioneers in the fields of science and technology. In the team’s 2017 documentary series on ‘PBS Storycast,’ the girls were described as “fearless trailblazers.”

As one of the two distinguished robotics teams at Bronx Science, the FeMaidens have made great contributions within the STEM community, such as mentoring middle school teams in the Bronx in the past years.

Their great deal of accomplishments has continued in 2018, apparent in all their competitive successes throughout the month of April.

The team was taken by surprise by its first national qualification in a long time, but also felt immense gratification towards their win.

“It was very surprising, because our robot was damaged by another robot at the very beginning of matches, so our rank was not where we wanted it to be. It was all very exciting in the end,” said Natasha Stamler ’18, captain of the all-girls team.

“Reaching the top twenties at championships after the first day felt incredible, and by being in an all-girls team, we knew that we were winning the game alongside breaking stereotypes,” Montaha Rahman ’21 said.

However, this was not the only happy surprise that the tech-savvy group of girls had last month, as they also received the Engineering Inspiration Award, which celebrated the girls’ success in building engineering interest within the Bronx Science community.

“All of our outreach paid off, and it was validation that we are much more than girls building robots in Bronx Science’s basement. Between the end of HVR up to Detroit, all the maidens worked with commendable fervor. And it’s paid off to the point that we ended up 55 out of 67, which is not bad at all considering the World tournament standards,” said Flaurencya Ciputra ’19.

It is evident that, for the FeMaidens, this season was not only a success for them, but also a step forward for all girls interested in STEM.

“If our success can inspire young girls to pursue STEM, the devotion and sacrifice that every member has contributed to achieve this monumental accomplishment will have been well worth it,” said Aviva Schwarz ’21.