Born to Fight: The March for Babies 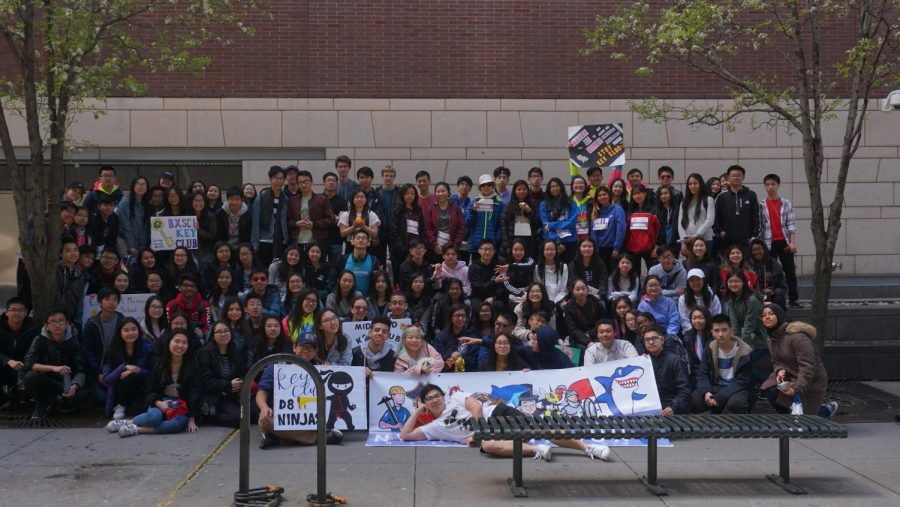 Bronx Science Key Club members, along with members from other Key Clubs around the city, gather for a group photo after the walk.

Usually, it takes an infant around thirty-seven weeks to mature. However, in rare cases, birth happens much sooner than it should. As a result, premature babies are born, some suffering from debilitating conditions such as dysfunctional lungs, irregular body proportions, a poor ability to feed, slow weight gain, and difficulties in regulating body temperature. Premature births occur more often than one might think, and they are now ranked as one of the leading causes of death for babies. In addition, researchers lack the resource and knowledge to completely resolve this problem. In response, the March of Dimes was created to combat premature births by raising awareness and by fundraising for research.

Formerly known as the National Foundation for Infantile Paralysis (NFIP), founder Franklin D. Roosevelt helped those with polio, attempting to explore the mysteries behind it. Later on, the president of the organization, Basil O’Connor, was able to diversify the focus more towards birth defects and premature births, which led to the development of March of Dimes in 1958.

The name itself actually came from the comedian Eddie Cantor. To honor FDR’s birthday, fundraising parties called ‘Birthday Balls’ are held annually on January 30th. When Cantor was organizing the event in 1937, he pitched in the name as a pun on the famous newspaper ‘The March of Time,’ in the hopes of increasing its appeal towards the public. The name would also grow to be an optimist slogan for Cantor, for if a million people donate a dime, it would add up to a total of $100,000. These two factors, and the collaboration with NFIP, contributed to the eventual widespread fame that the organization has now.
“We march to show our support for better programs and to provide healthcare for pregnant mothers and babies,”  Noshin Shakawat ’19 of Key Club said.
By 2016, March of Dimes was worldwide, supporting over four million babies and their families across the globe. To give the public a voice in this cause, an annual walk is hosted to raise awareness and fund research for premature babies. The 2018 March for Babies walk took place in Lincoln Center on April 29th, 2018. Nearly 5,000 families, friends, and other organizations were invited, clad in purple to support the cause by marching down the roads of Columbus Avenue.

Through this event, students from different schools across the city also had the opportunity to attend the march, including Bronx Science students. Some students chose to volunteer as course marshals who guide and cheer on people as they walk pass, while others decided to participate in the walk itself. The Bronx Science Key Club was present at the walk as a supportive volunteering organization. With their high spirits and colorful posters, members of the club were also able to voice their support for the march. “We march to show our support for better programs and to provide healthcare for pregnant mothers and babies. We believe that all newborns deserve the chance to grow up and live in our world as healthy as possible,” Noshin Shakawat ’19 of Key Club said.

As New Yorkers marched down the streets, the purple garments reflects their spirit and compassion for those with birth defects, and the need to better our environment for the newborn infants. At the end of the day, New York City raised approximately $77,000 for the March of Dimes. Whether we personally experienced a similar situation, or are just simply enthusiastic advocates, we came together in purple.