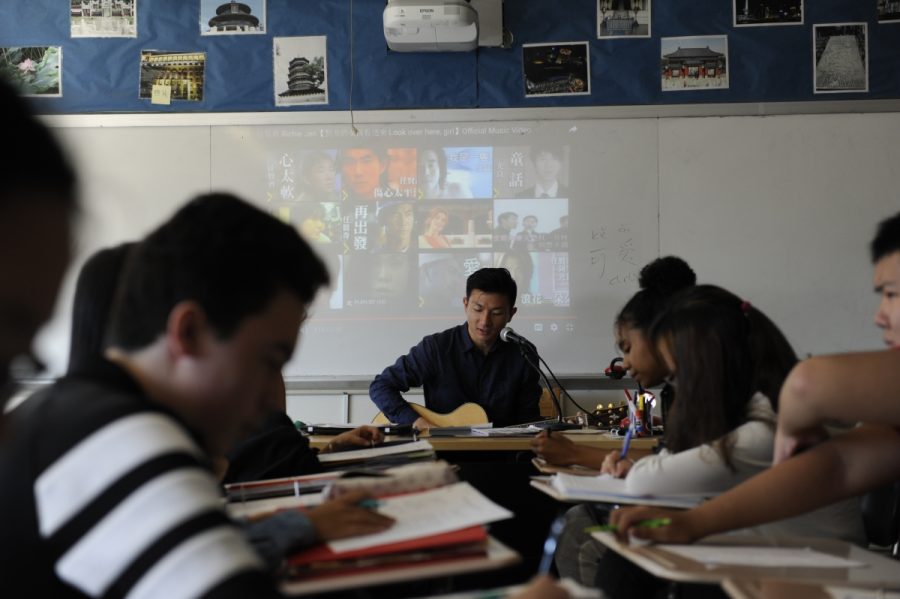 Mr. Qiu, Chinese teacher, instructs his students in Chinese by singing a popular song in the language.

The newly renamed Bronx Science World Language Department has made its debut. The change reflects a growing nationwide trend among many high schools and colleges renaming their language departments.

Even as the word “foreign” has grown more controversial within American political discourse, the Bronx Science World Language Department has retained its celebration of diversity and culture, one that it has pursued since its inception in 1938.

One concern of many educators in support of the movement is that amidst recent debates on immigration, the term “foreign” has developed a negative and exclusionary connotation.

Neither the United States nor New York State has an official language, and for many students with a first language other than English, the categorization of their languages as “foreign” in schools can be an alienating distinction.

Spanish is the most popular “foreign” language studied at Bronx Science. Bronx Science provides accommodation in advanced classes for many students each year with prior knowledge or who speak the language at home.
“The spirit of the change within the department has been easy — there was nothing to change,” said Assistant Principal to the World Language Department Lisa Rocchio.
When the department was first named the “Foreign Language Department,” the intention was never to alienate any student populations: the department has always celebrated diversity and consistently offered a well-rounded curriculum with many language and culture options for students from which to choose.

The language faculty is comprised of teachers from around the world, and the department is known for its many diverse traditions like the annual Japanese “Kohaku” singing event, or the Latin Club sponsored art mask competition.

“The spirit of the change within the department has been easy — there was nothing to change,” said Assistant Principal to the World Language Department Lisa Rocchio. “It’s really just been more of a clerical task.”

The department name has been quietly edited on the school website and on school documents after a poll of all the language teachers revealed resounding support for the decision.

They are easing into the change, but it’s no easy task considering that the name of the department has stayed the same since its inception.

The change in name serves to more accurately reflect our school’s core values. As the previous name is phased out, the World Language Department will continue to offer its truly unique language program to our students.