Annual Can Drive is Most Successful Ever

“This is actually the biggest donation I’ve ever seen from a school," remarks a City Harvest worker. 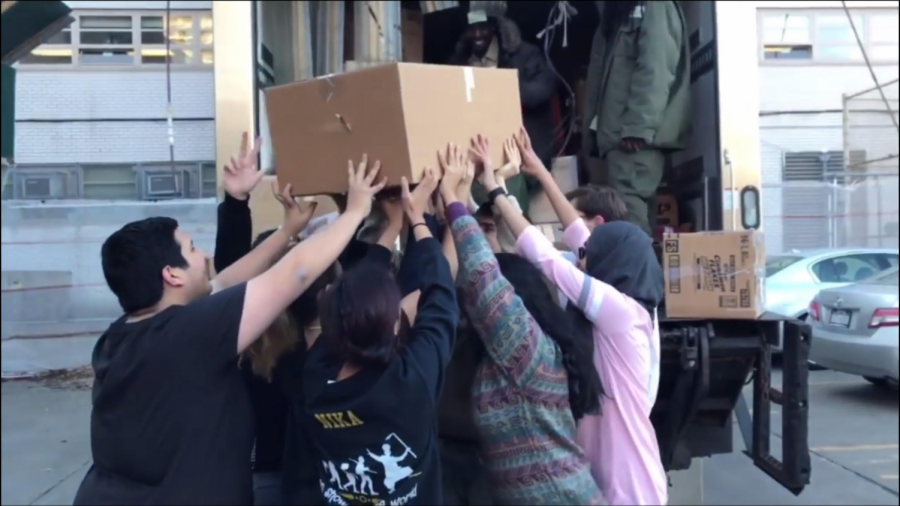 The SO collaboratively hoists a heavy box onto the City Harvest truck.

From juicy green beans to flour-dusted macaroni, homeless shelters receiving food from City Harvest, a nonprofit organization dealing with food rescue and distribution, were filled with more donations than usual on Christmas and New Year’s Day thanks to the hard work of Bronx Science students. Each year, Bronx Science sets out to collect 3,000 cans for its annual can drive. In 2017, that goal was met for the first time, as students donated a total of 3,037 cans. The drive began on November 13th and was scheduled to end on December 20th, but was extended to the 21st when the Student Organization realized that the school was the closest to the goal of 3,000 they had ever been – a mere 600 cans away.

As incentive to donate, students were promised a no-homework day on January 5, 2018 should they meet the goal. Such a reward was thought to be unattainable; in prior years, students had brought in only about 1,500 cans in total, only halfway reaching the goal.

While the no-homework incentive certainly motivated students to donate to the drive, its success can also be attributed to help from members of the Bronx Science community. Social studies teacher Mrs. Stephanie Kountourakis was a major contributor.

Well-known for being up-to-date with student-run events like the bake sale to raise funds for hurricane victims of Puerto Rico, Mrs. Kountourakis advertised the can drive in her classes. Each day, students would walk into her class to see “Donate to the Can Drive!” written in colorful dry erase bubble letters on her blackboard.

These reminders paid off: from her classes alone, over 307 cans, more than 10% of the can drive goal, were collected. “We’ve got to thank Mrs. K’s tireless advocacy for can donations!” Ester Liu ’19 said.

Meeting the can goal was especially impressive, since previously all homeroom senators were required to donate cans, while this year they were not. Senate leader Artea Brahaj ’19 explained, “What many people don’t know about Senate is how much they contribute to so many S.O. events. All senators were mandated to donate candy for both the Monster Mash and Spirit Week, something we had not done in the years prior. Since we had asked so much from them already, we decided not to make can donations mandatory.” Cans donated by senators usually contribute to a moderate portion of the total number of cans accrued by the drive. This year, even without an official requirement, the Senate donated 104 cans.

One thing many students agree on is how the student organization’s efforts in advertising the can drive facilitated its success. Anthony Lim ’21 admitted, “The can drive was successful this year because of the advertisements that were on the morning announcements and all of the posters.” The drive was also published during monthly senate meetings held during lunch periods and through weekly emails to all homeroom senators.

Through large colorful posters lining hallways and stairwells, flyers placed in bathrooms, weekly Wolverine TV promos shown in homeroom, and mentions in daily morning announcements, the student body was made well aware of the drive. John Aidan Feighery ’19, the social media chair of the S.O., was proud to see that the S.O.’s hard work paid off. “This year, the S.O. Cabinet made a huge effort to get fellow students to donate. By continuing the advertising practices employed this year and making this a strong part of Bronx Science tradition, I firmly believe Bronx Science can continue to be a major force in contributing to the welfare of our city’s less fortunate.”

Indeed, the can drive has motivated students and increased their school pride. Can drive co-chair Ryan Yam noted that “this success shows our school has potential to do greater things than just school work, and that we can work together to accomplish things—that even with a little bit of motivation, we can achieve things that have never been done before.” Can drive co-chair Umayma Hasan agreed: “The success of this can drive just shows how motivated Bronx Science students actually are, and how if we put our mind to it, we can accomplish anything.”

With donors ranging from the staff and faculty to clubs, NHS members, and the general student body—from freshmen to seniors—this year’s can drive was truly a great victory for Bronx Science as a whole.