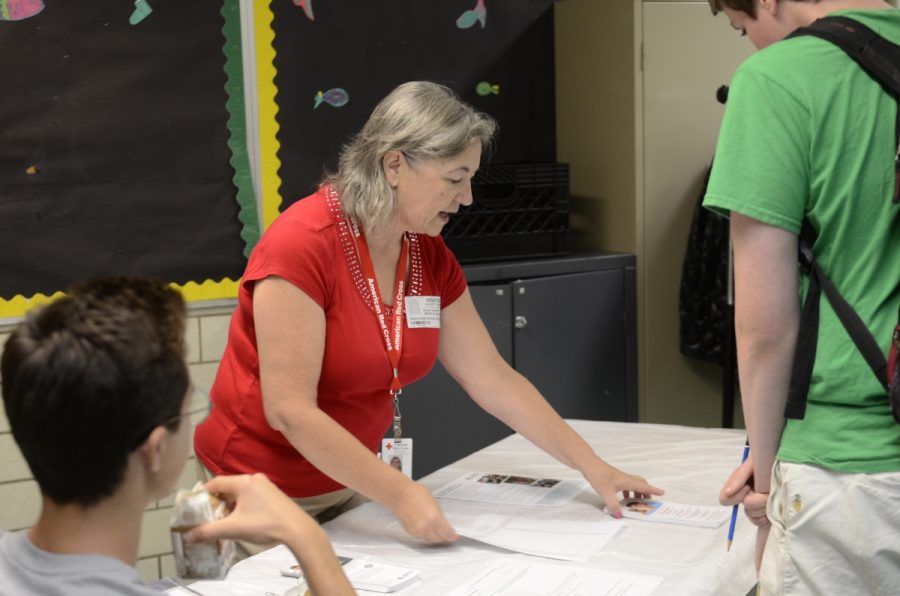 A representative from the Red Cross talks to a Bronx Science student during the annual Blood Drive.

Every two seconds, someone in the United States needs blood. An easy way to help solve this issue and make a significant impact on the community is to donate blood. Bronx Science hosted its annual blood drive in conjunction with the Red Cross on Friday, October 27, 2017 from 8  a.m. to 3:45 p.m. The blood drive was held in the multipurpose room next to the library. Students ages sixteen and up and faculty members were all encouraged to donate blood.

There were two types of donations that were made during this blood drive. “There’s a regular blood donation, and there’s another type where they remove blood cells and put everything back. For that there is a weight and blood type requirement,” said S.O. Coordinator Tahira Hasan ‘19. “Basically people who are sixteen and seventeen can’t do that donation,” said S.O. Coordinator Ayesha Khan ‘20. The exact requirements can be viewed on the Red Cross website. Whole Blood is the most common type of donation, in which a pint of whole blood is donated. Whole blood is blood drawn from the body from which none of the components have been removed, such as platelets or plasma. A Power Red donation collects the red blood cells, but returns most of the plasma and platelets to the donor.

Blood donors received a free Red Cross t-shirt, a cookie, and a sticker after donating. The Bronx Science community remains hopeful that their donations will save the lives of many. More than eighty students and faculty registered for the blood drive and many of those people came. About fifty units of blood were collected, which could potentially impact about one hundred and forty lives.  “Every donation has the ability to have an impact upon people’s lives, so we were pleased with the number of donations that we had, and we expect the number to increase for future drives!” said Hasan.