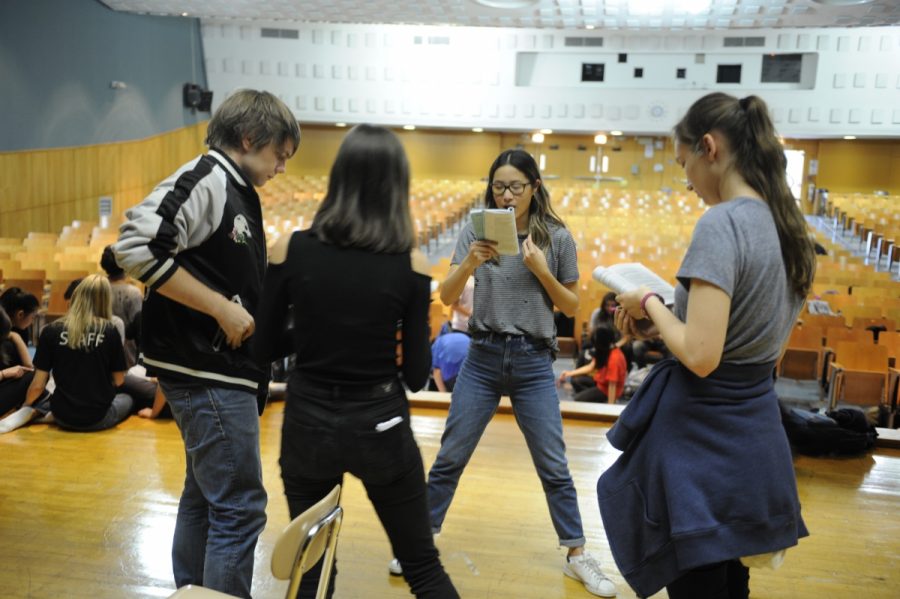 Students in the middle of rehearsal for the fall play after school in the auditorium.

The production of the annual fall play was slightly delayed due to the school not being able to receive the rights to The Mousetrap, a murder mystery by Agatha Christie.

The school applied for the rights to The Mousetrap through Samuel French, a leasing company. Unfortunately, the company chose to give the rights to a professional production, instead, causing the school to be unable to perform the play.

In recent years, the school’s Drama Department has successfully produced various fall plays. Although there were minor issues with each production, most problems were easily resolved by either Mr. Brown, the Drama Moderator, or that year’s Stage Manager.

Yet this year, the Drama Department encountered a roadblock by losing the rights to a professional production. “This had never happened while I’ve been here. It’s pretty rare,” said Juliet Godwin ’18, the Costume Director of Stage Crew.

The fall play is usually determined weeks before the school year begins, making it possible for both the stage crew and directors to head right into production when school commences in September. The directors choose the play based on their own interests as well as peer input.
“In life, we have to realize things happen for a reason, and we ended up finding an amazing new play to put on.”
This delay, however, not only caused the Drama Department to scramble to find a new play and a new date for auditions, but also delayed the start of the production of the play.

“It’s a really stressful situation because we needed to start everything over from square one, finding a new show and auditioning a new cast,” said Junior Director Rebecca Karperis ’19.

“Of course, the show must go on,” said Kristina Ang ’18, the Senior Director. “It is a shame that we lost the rights to such a great play, but I feel like there’s definitely room to find an even better one.”

Although both auditions and crew meet ups had to be pushed back by a solid week, the Stage Crew and cast were able to quickly get back on schedule.

“In life, we have to realize that things happen for a reason, and we ended up finding an amazing new play to put on,” said Ang.

The directors and lead members of Stage Crew were confident about this new play, and a successful performance of Arsenic and Old Lace was held in December 2017.