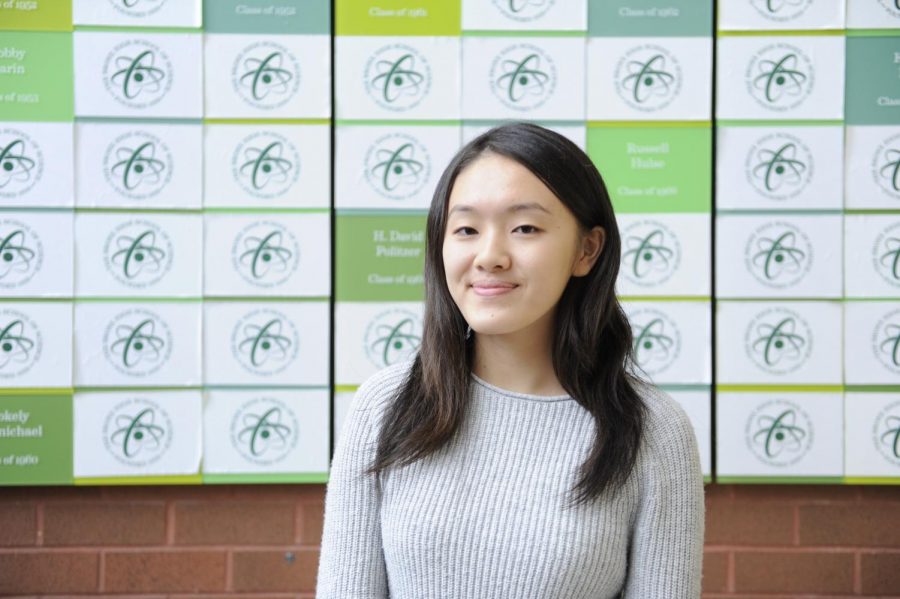 Senior Amy Gu ’18 is interviewed for the new iPhone X.

Water and dust resistant, with wireless charging, with an all-screen design, the new iPhone X just released has numerous new features. Apple intends it to serve as a celebration of the tenth anniversary of Apple’s original iPhone debut.

Apple officially released information regarding the new iPhone, the iPhone X, and claims that the new model marks a new beginning for the brand and is revolutionary with some of its various new features.

A great advancement from its predecessors, the iPhone X is now more durable than ever; the whole phone is constructed of more durable glass and is both water and dust resistant.

Many people are also interested in the new charging method that the iPhone X features, that of wireless charging. “I think that the wireless charging feature is really cool. Now, people just need to place their phones on a pad instead of plugging it in with a cord to a wall socket,” said Amy Gu ’18.

An external feature that people are anticipating is the fact that the home button on the front screen is gone. “I really like how the front of the phone is just entirely a screen, but I don’t know what to expect from it, because I have become used to the home button,” said Cindy Li ’18.

However, even with all of these new features, for some, it still doesn’t make the new iPhone attractive enough to buy. Some potential buyers are dissuaded by the iPhone X’s price; it retails for $999.
“I really like how the front of the phone is just entirely a screen, but I don’t know what to expect from it, because I have become used to the home button.”
In just a couple of years, the pricing of iPhone products have drastically risen. Just a year ago, when Apple introduced the iPhone 7, the price started out at $549. The iPhone 8 which succeeded it, which has almost the same features as the iPhone X, starts at $699. Even at roughly $700, the iPhone 8 is an expensive proposition for many people, not to mention the $999 starting price point for the iPhone X. “The price of the iPhone X is absurd. What part of the iPhone X is so expensive that the price has to be that high?” said Anna Choi ’21.  “I’d be crazy to buy the iPhone X! I’d rather buy something else with that money.”