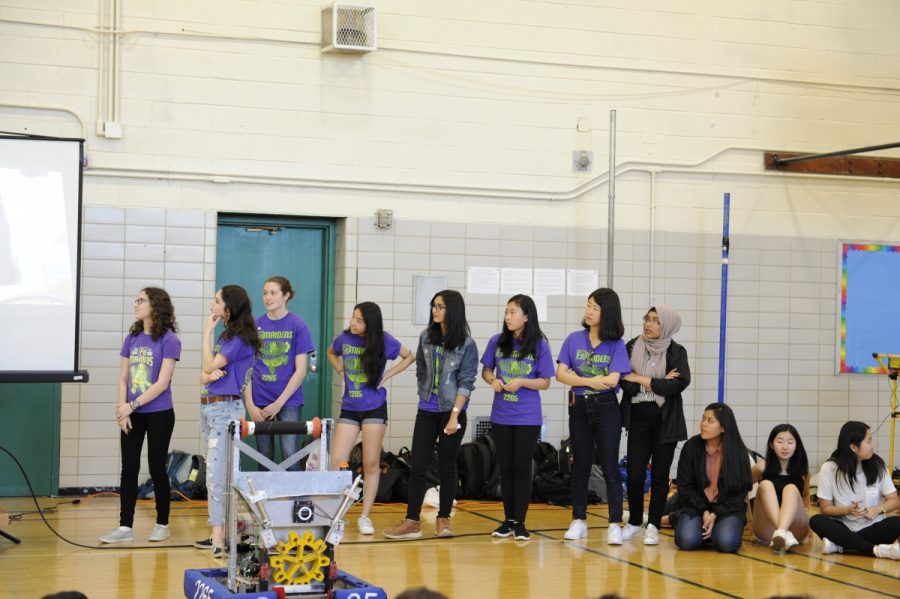 The “Fe Maidens” have used the docuseries to attract prospective members.

Bronx Science’s all female robotics team, the “Fe Maidens,” has long been recognized for being one of the only all female robotics teams in the country, and even the world! The team aims to bridge the gender gap in the STEM field, one girl at a time. In recognition of this unique mission statement, the team has been featured on a PBS docuseries, which first aired on September 6, 2017.

The team was filmed during their build season and competition season last winter, once a week in the classroom and once every other week outside of the classroom. The docuseries aired through October and consists of six episodes that are 8-10 minutes long each, produced by Killer Film Media’s Adrienne Becker and Amber Guyton, partners of PBS. The series aired electronically via PBS’s new channel, Indie Lens Storycast. Being one of the first series aired on the new channel, the Maidens played a big part in helping promote and launch it.

Becker was introduced to the Maidens’ story on the internet and really appreciated their knack for problem solving and their unique angle into the STEM world. “My hope is that the series is another tool that can help illustrate the resilience and persistence girls in STEM have,” said Becker.

Becker also felt personally connected to the team: she herself was once a teenager interested in STEM, and she has a young daughter who she wants to be true to herself. She believes that the Maidens are a good influence on not only girls everywhere, but also boys. Becker said, “Whenever I find women who do something different and who find power in it, I want to understand and share how they got there, what enabled them to charge through the obstacles–to see the light–and I want to tell those stories so that other girls have accessible role models to chart their own path, unabashedly.”

The docuseries also contributed greatly to the team’s public relations (PR). Since they need sponsorships to build robots and compete, the team has its own PR department. “For PR work, we are actually working directly with the film crew to be a representative for the United Nations International Day of the Girl on October 11th, and we’re featured in a book written by someone closely related to the film,” said captain Natasha Stamler ’18.

As if being featured by PBS wasn’t enough, the team’s work goes way beyond designing and building robots. They continue to do nonprofit work with the filmmakers to promote female engineering in less developed countries and to help disadvantaged young girls receive mentorship. They are also working with War Child USA to promote these same ideals for children in refugee camps. “Last school year, pairs would go to elementary schools in the Bronx to help out young kids build smaller LEGO robots. This year, our junior captain, Jess Shannon, invited us to her old middle school to mentor and guide their new robotics team, which she helped to create,” said a member of the Fe Maiden electronics department, Julie Tung ’18. “Our goal is to spread resources as well as mentorship and support to not only girls, but everyone interested in STEM.”

Filming the docuseries came with many other perks as well, such as meeting Danielle Brooks from the popular television series, ‘Orange is The New Black.’

Overall, the series was not distracting, and the team views their series with excitement and gratitude. They had a very successful season, having the chance to experience the excitement of being a film muse, in addition to other new opportunities.