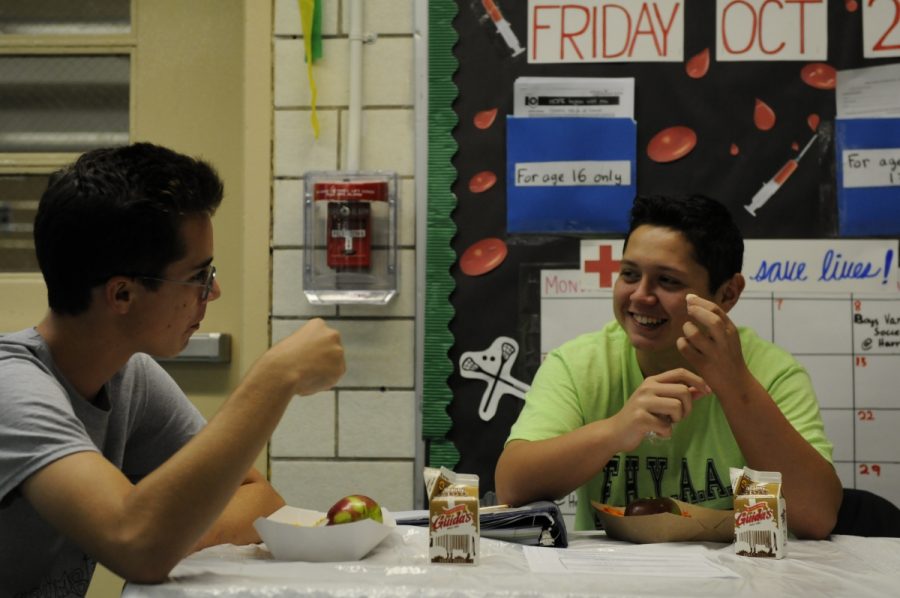 Eytan Stanton ’19 (pictured left) and Matthew Burke ’18 (pictured right) enjoy the “Free Lunch for All” initiative launched at the beginning of the 2017-2018 school year.

This fall, the cafeteria line is longer than ever before, with students eagerly waiting to receive their free midday meal, before immersing themselves back into their academic studies.

With the Department of Education’s recent decision to make public school lunch available for free citywide, Bronx Science students’ lunch habits are changing for the better. Previously, breakfast was free of cost for all students, but starting this school year, lunch is now free of cost to students as well.

Lunch is a core part of every students’ school days at Bronx Science, whether they have a free period or not to enjoy it. It’s a period used to unwind from seemingly endless cycles of lectures, Socratic seminars and essay writing, a time to socialize with friends, and most importantly, a time to eat.

For our students, Ned’s savory fries and Jay’s hot egg and cheese sandwiches are among the few things that make the school day a bit more bearable. However, going to the food trucks every day isn’t always easy on our wallets. Even so, many students have stayed loyal to their favorite vendor, often preferring to spend a couple of extra dollars on a toasted bagel or coffee from the food truck, rather than paying the $1.75 for the government-provided cafeteria lunch.

However, ever since the implement of the new lunch system, Bronx Science students have been changing their eating habits. George He ’19 said, “Now that school lunch is free, it saves us students, a lot of money since now we don’t need to go outside to buy food.”

How did this change come to be in the first place? According to the Kids’ Well-being Indicators Clearinghouse (KWIC), a tool used by the New York State Council on Children and Families for policy development and planning, Bronx County was the highest receiving region of free school lunch within New York City during the 2015-2016 school year, with a rate of 82.6%. However, according to a U.S. News Report, the student population at Bronx Science who received free lunch was significantly lower that same year, with a rate of 36%.

Additionally, the stigma of receiving government assistance that covered the expenses of school lunch has led to many students who are qualified for aid to prefer either buying food or skip eating rather than getting lunch from the cafeteria.

Nevertheless, the DOE worked extremely hard to make it possible for all students to receive two free meals a day provided at their school. Carmen Fariña, Chancellor of NYC Public Schools, made the announcement at the beginning of this school year. The change was a result of the DOE using a new matching system, for the easier identification of families who need free lunch within the city. It was found that the certification rate had increased, allowing for the New York City public school system to qualify for the highest reimbursement from the federal Community Eligibility Program.
“Now that school lunch is free, it saves us students, a lot of money since now we don’t need to go outside to buy food.”
The “Free Lunch for All” initiative provides free lunch to all public school students, 75% of whom were already qualifying in the previous year. Now, being completely inclusive of all students, it is estimated that families can expect to save $300 on school meals annually.

“It’s a good thing that free lunch is provided for everyone now, so people don’t always have to bring lunch from home. Especially in such a demanding school like Bronx Science, where students may not have time to pack a lunch beforehand between loads of homework and extracurricular activities, having prepared lunch provided is a great convenience,” said Farhan Sakib ’21.

Ayesha Khan ’20 emphasizes the importance of this initiative. Khan said, “I think it’s a good change. It’s good for many students whose family incomes are low, but don’t make the cut. It also provides an assurance of food for those who don’t qualify, as they don’t have to worry about leaving the school premises to get their food.”

The school’s own faculty members support the change. “I’ve actually had school lunch before, and I think it’s very tasty! It’s a great initiative that the student body at Bronx Science should take advantage of, because it’s a lot cheaper than the other options students use to get their lunch,” said Ms. Cooper, Assistant Principal of Organization. “Give it a chance!”

Bronx Science stands out from many other schools in the city, notorious for its competitive academics and extremely motivated student body. However, it is important that Bronx Science students, like all other teens, are aware of caring for their health. With the DOE now providing two free meals to all students, we can give Ned’s fries a break for now and enjoy this new initiative.